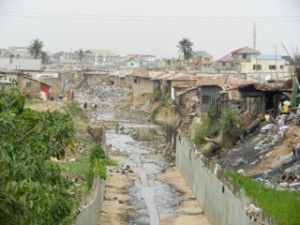 The Ghana federation is embarking on its largest and most ambitious data collection process to date – citywide profiling of seven municipalities in the Greater Accra Metropolitan Area (GAMA). GAMA is comprised of 11 districts, each of which has multiple sub-metros and many neighborhoods.

Last week the Ghana Federation of the Urban Poor (GHAFUP) held a “learning-by-doing” planning exchange to lay a strategy for their first citywide profile. Federation members and technical support staff from Uganda, Sierra Leone, and South Africa joined the Ghana federation to share lessons from their own citywide profiling experiences.

It was immediately clear to all involved that they had underestimated the shear size of Accra’s informally settled communities. During the first day of mapping the federation discovered that many of the communities identified by local authorities were a mixture of formal areas interspersed with pockets of informal slums. These slum pockets are not formally recognized by local authorities.

At first we were many so then they divided us into groups. One group went to New Town and one went to Kandar and one went to Mamobi. I was in the Mamobi team. When we got there we first took [mapped] the boundary of the whole Mamobi. We couldn’t finish that day so we had to come back. The following day we took [mapped] the pockets of slums. We took [mapped] a lot! Because the place was so big we couldn’t finish all the slums, so they were saying we should pick some service points, such as streetlights, roads, toilets, garbage dumps, schools, churches and mosques. So we took [mapped] all these things and when we got back we saw it was too much. So we needed to choose just some. Since the federation can’t build schools and churches we decided we should pick some key services like toilets, garbage dumps, water points, and drainage. So the following day we took just those points and it was very fast to capture. It was fantastic! Everything was moving on so well. People were eager to learn the GPS and some were doing the recording. We all came back together. Meanwhile there were some slums people couldn’t finish so we had to go back to the field to help capture the whole place and it was marvellous. Some of the community leaders were so tired and they refused to go back to the field. Only one went back, but the rest of us all went to help finish.

After seeing and understanding the actual context on the ground the team had to come back to the drawing board to develop a new plan for identifying slum areas within these communities. After much discussion and reflection it was agreed that in order to conduct a citywide profile the teams must first enter a community or neighborhood and map the boundaries of the electoral/administrative area. During the process of walking the boundary and discussing with local leaders the team can then identify and map the boundary and services of the pockets of slums within each community. Once these slum pockets have been identified and mapped the community will return to hold the profiling focus group discussion. 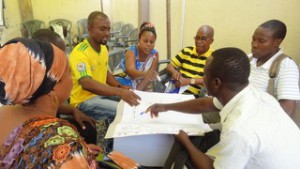 Learning about the GPS was a good experience because I never thought I could hold it and use it. But I could use it, I learned. Also recording the data – I did that as well. I was able to figure out the coordinates on the GPS. I learned to capture the data on the computer and I felt on top of the world! I realized I now have a level of confidence to impart the knowledge I learned to someone else. I was able to build my confidence to share knowledge with others. Being with the foreign team (delegates from Uganda, Sierra Leone, and South Africa) I learned so much. I learned from Sharon (Uganda federation leader) how I shouldn’t be selfish when you know something. You should be ready to impart what you know to others and be patient. The international team was not bossy, they know many things, but they don’t think they are so big. I’m so eager and want to put in best. I’m ready to learn and face my challenges now. 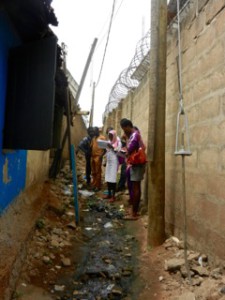 This is going to improve my community based on me. Because the knowledge and understanding I’ve had I now can teach and inform the community so they have the knowledge too. The savings will help our community because it is this savings that gives you the power and strength. It shows the authorities your weight to put in for something to improve the community. Without savings, someone can’t come from outside to help you. I made them to first understand that our development will be 95% based on our savings. Even yesterday, some people called and came to the house to get information on starting savings. They wanted to buy savings books but didn’t have the money, but are willing to come in and start. I was telling Sharon (Uganda federation leader) that God works in mysterious ways. Coming together with this humble family [federation]. I give glory to God to making me part of this unique family. I’m so happy. I can’t emphasise it.

In the span of a week the team had planned to profile and map four communities within Ayawaso East – one of eleven sub-metro areas in Accra Metropolitan Area (AMA), which is just one of the seven metropolitan areas the federation is planning to profile and map within the next year. Due to their adaptability, new plan, and enthusiasm to uncover all the pockets of slums in the four communities of Ayawaso East they mapped 26 settlement boundaries and the services available in each settlement. In addition, they mapped the four larger boundaries of Kanda, New Town, Nima, and Mamobi (the four communities of Ayawaso East) – a total of 30 boundary maps. 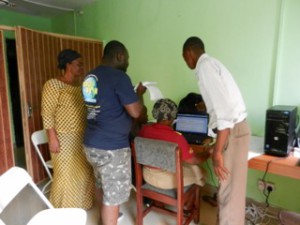 The data capture was the most important thing I learned. It is the first time I’m doing this. It’s a blessing in disguise for me because I didn’t know something like this would help me. We have been doing profiling and mapping but we hadn’t been doing the capturing, so it was a new thing. I didn’t think we would do this but we did! It’s a lot of work and good. The data capturing will help me because it can help me draw a map on my own. I can teach my brothers and friends who are near do it and when I’m not there. They can help continue the process.

When I came I was feeling shy and afraid to do certain things. The first day she (Anni, SDI Secretariat) taught me how to use the tablet in capturing and I used it for 2 days. The second day I was perfect! I was on the field recording, but was told to come and do data entry. I thought it was something big and I couldn’t do it. But when I got here my colleagues were here and they welcomed me. I needed an account and was going to use my facebook, but they said I could have an email. They said I can use my date of birth or something to remember to make my own email. I never thought I could have this. They showed me how to create an email address. Terri was entering the services but then Anni said it was my turn. I could type though my speed was slow, but she said I could make it and to take my time. It is now pushing me to learn more. This will not be the end of my learning. I want to plan to buy a computer for myself. I’m very happy. 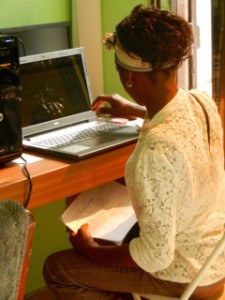 In the next few months the data team of the Ghana federation will continue to refine and deepen its learning in order to most effectively and efficiently roll out profiling and mapping to rest of AMA as well as the remaining six Metropolitan Areas of GAMA. No doubt the data and information collected will be a huge feat for the Ghana federation and the SDI network, but more importantly will provide the communities with the tools and information to engage and dialogue with their local authorities around service provision, security of tenure, and possibilities for joint slum upgrading.

Our work in LSC 2 [Lands Services and Citizenship 2 – National Urban Development Program funded by Cities Alliance] is going to bring a lot of issues and skills into the Ghana federation of the Urban Poor. Since we have been doing profiling and enumerations, it is only the support office that normally captures the data. But now we see that the Ghana Federation of the Urban Poor is improving by capturing our own data that we collect in the field. We are hoping that these few people we have trained, that they will train more people to come on board. Because this won’t only be Accra but will be in other regions and we need to bring people on board to have those skills.

We have trained a lot of people, and we are learning how to engage with the sub metros and the city itself. Before the support office gave letters to the city, but now we [community members] distribute the letters and after distributing the letters we go there to follow up. We sit with them and we told them what we want them to do to support us in the community. Our plan is to use the information to engage the municipal assemblies for the development of the communities and services they are lacking. So we use the information in order to advocate to the assemblies.

Another big achievement is towards the AMA. It has now opened its doors towards Old Fadama for the Ghana Federation and People’s Dialogue and SDI to enter. This is a big achievement! For the past 14-15 years they didn’t do that. They don’t even what to hear our name. But now they open their doors and anything they want to do, they call federation and People’s Dialogue and they are asking the communities advice on how they can come in and do development here. They need more advice from our support office and the federation. If we are able to sign the MOU with AMA it will be the biggest achievement. The mayor himself came out several times to do a press conference saying he has demolished Sodom and Gomorrah but Old Fadama is still staying and Old Fadama is going to stay forever. So that is the message he is saying  – we grabbed that message and are going to use that message in order to push him to sign the MOU so we can also be partners with them to see how we can get the security of tenure. When we get the security of tenure, we have achieved the biggest thing. We can then come together to figure out how we can develop this place with nice affordable houses for the people. Now that these people opened their doors, it’s an opportunity to us to also move in.

On behalf of the Ghanian Federation of the Urban Poor and People's Dialogue on Human...