Federations Put Data to Use in Lagos, Nigeria 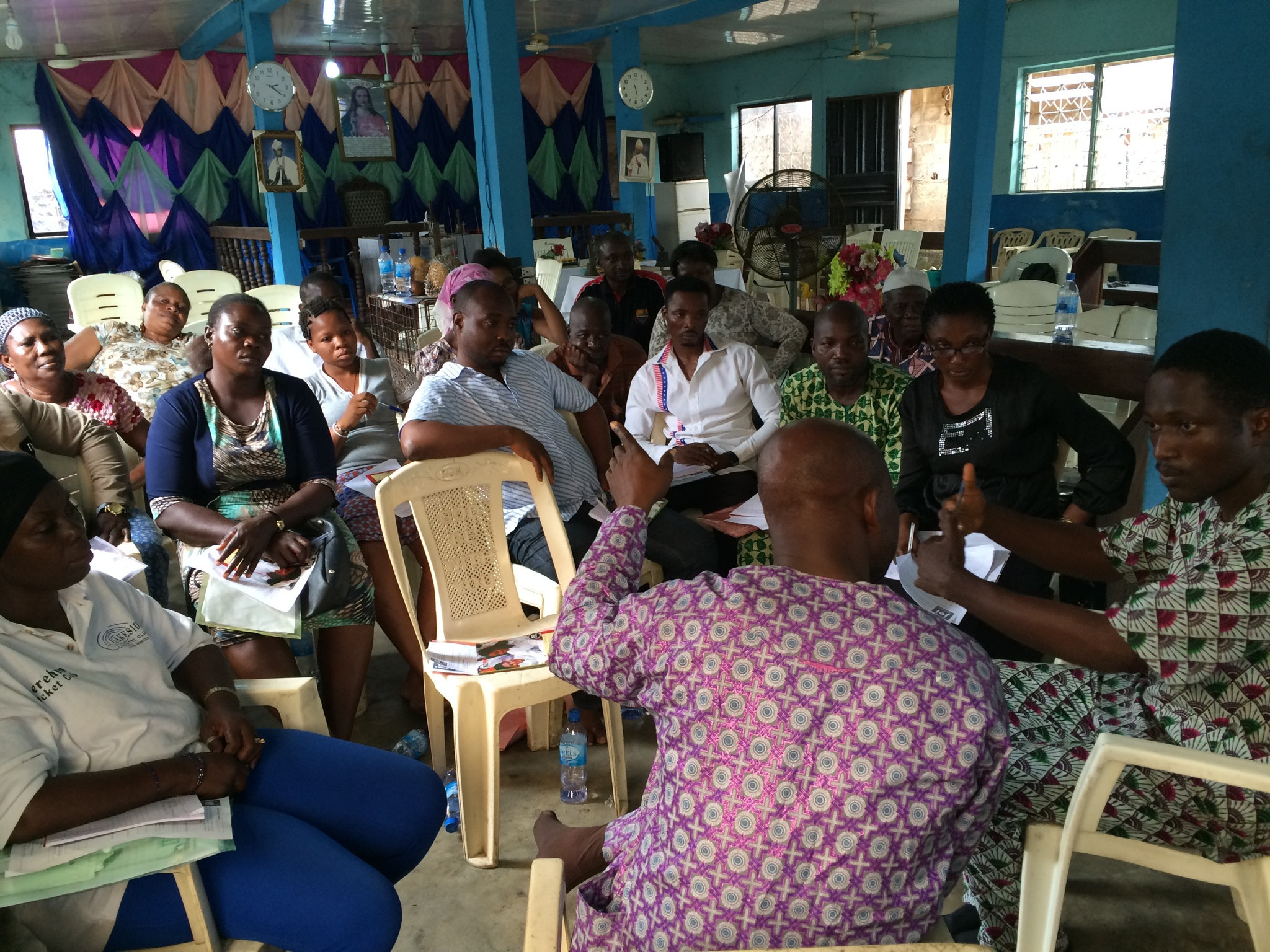 UN Habitat’s Global Land Tools Network (GLTN) Urban Cluster Work Plan Project was conceptualized and developed by GLTN’s urban civil society partners at the Partners Meeting held at the Hague in November 2013.  The project was facilitated by the secretariat of GLTN, and coordinated by Shack / Slum Dwellers International, serving as the urban CSO cluster lead organization.

The project was focused on promoting capacity development, awareness raising and alliance building within the Urban civil society cluster and among other clusters to contribute to the GLTN vision of a pro-poor, gender-responsive land interventions, with particular emphasis on increasing grassroots women’s land tenure security at country level.

The Urban Cluster Work Plan laid emphasis on collaboration and partnership between both GLTN partners in the urban cluster and across clusters. The intended outcomes of this were: joint advocacy positions on land tenure security within the global processes of developing post-MDG goals  – the Sustainable Development Goals, as well as participation in Habitat III; and improved land tenure security for poor communities working with the GLTN partners.

The Asian  component was led by SDI’s India affiliate organization, SPARC.  In Africa regional activities were implemented by two partners: the African Association of Planning Schools, which is part of the Academic Institutions Cluster of GLTN; and SDI’s Nigeria affiliate Justice and Empowerment Initiatives (JEI).

This post will focus on the profiling and mapping activities undertaken by the Nigerian Slum Dwellers Federation and JEI Nigeria in Lagos, Nigeria – Africa’s largest city with a population of 23 million, two-thirds of which lives in slums.

Within the context of the SDI, Cities Alliance, and UCLG-A supported  “Know Your City” Campaign, the Nigerian SDI affiliate supported citywide slum profiling and mapping through:

Between May and November 2015, the Nigerian Federation supported the profiling of 28 slums in Lagos. 15 of these settlement profiles were supported by the urban cluster work plan.

The data collected in a slum profile consists of a boundary map of the settlement, mapping of basic services (like water and sanitation), a tally of all structures, photography, and the collection social economic data through focus group discussions covering 300 data variables. (To learn more about SDI’s slum profiling work, visit knowyourcity.info). The profiling tool is inclusive of all questions contained in the STDM standardized community profiling questionnaire.

With the aim of carrying out city-wide profiling of all informal settlements in Lagos, JEI and the Nigerian Federation continued to train new Federation members interested in supporting community-led profiling, with a focus on youth members who have added capacity to learn how to use new technologies and energy to lead work in the field. The growing cadre of trained and experienced Federation volunteer profiling facilitators trained under the GLTN grant are going to be key to achieving city-wide profiling in the mega-city of Lagos in the coming years.

Building off of the informal settlement profiling completed thus far, JEI and the Federation have also worked to identify as many slum communities in Lagos as possible. This has happened in a variety of different ways, including: 1) identifying communities neighboring those that have already carried out profiling through in-person visits, 2) identifying communities clustered along the shore of Lagos Lagoon visible from afar when crossing the Lagoon on boat or via the Third Mainland Bridge, 3) brainstorming lists of communities that Federation members are aware of located in different Local Government Areas in the state, and 4) analyzing satellite imagery and other available data/reports to identify where informal settlements are located throughout the city. We are using this growing list of informal settlements as a bar against which we can measure our success in reaching new communities.

Data Capture and Return to Communities

The data capture process has been handed over to the federation teams, who enter all data into SDI’s global Know Your City data platform. To enable this process, both SDI and JEI undertook extensive training for community volunteers, who also had some computer skills. This has had the benefit of creating a feedback loop between the data collection and capture process and the communities. All profiled communities received a two-page community factsheet on the data collected, allowing for verification and subsequently for data updating.

For the communities profiled, this was the first time that they saw themselves ‘on the map’ and getting a more concrete sense of their population and other key statistics they can utilize. This has many practical benefits such as communities better recognizing their assets and their needs, as well as less concrete benefits such as greater communal action within communities.

With the concurrent support from SDI the Nigerian federation is able to leverage on the collected data. Currently JEI is working with communities to ‘put the data to work.’ For 7 Lagos informal settlements, one way this is happening is through a collaboration with Cornell University Department of Architecture which is working with the Federation’s profiling data and other community inputs to develop prototypes for simple, built solutions to some of the challenges that the Federation has identified as cross cutting, particularly as relate to water and sanitation.

This includes the Typology of Toilets and Water Points in Lagos Informal Settlements, and the Standard Building Methods for Structures Above Water in Lagos Informal Settlements. For other communities, the Nigeria federation is exploring a follow-on household-level mapping aiming to secure their land tenure through negotiations with a traditional land-owning family and subsequent formal land registration.

At the outset updates were made to the standard SDI profiling questionnaire (with is inclusive of the STDM profiling template) to accommodate the Nigerian realty. Utilizing this questionnaire has resulted in overall cleaner and clearer data due to elimination of confusion among Federation profiling facilitators or communities. These are major achievements that enable profiling to move efficiently while responding to Federation communities’ needs and interests.

Following feedback from the Nigerian Federation, the service mapping form has been updated to add categories/sub-categories that are more responsive to local context. This service mapping data is a key resource in our collaboration with the Cornell University Department of Architecture.

With the aim of finding means of increasing the tenure security of Lagos’ informal settlements, JEI is now developing a new module to add onto the standard profiling questionnaire that will include more detailed, Nigeria-specific land tenure-related questions that the Federation will be piloting, beginning in February 2016. To develop the relevant questions we researched what similar tools already exist and where there are best practices that can be drawn on. This included conversations with other’s including a former USAID land tenure expert who worked in Nigeria, and a new start up NGO named Cadasta that is working to help make more flexible the land tenure tools that already freely available.

Simultaneously, JEI’s legal team has researched Nigerian land law and the available processes for formalizing land tenure. With the additional land tenure data collected with our new land tenure focused profiling module, during 2016 JEI and the Federation will work with communities in which the Federation is most active to develop tailored strategies towards greater tenure security.

Since its launch in early June 2015, the Nigeria Slum / Informal Settlement Center has served as the main meeting point for the Nigerian Federation to engage with the data that they collected through the community profiling and mapping processes.  JEI and the Nigerian Federation have convened dozens of meetings to review data collected, discuss how to reach more communities in order to achieve city-wide profiling in Lagos, and have also together begun building plans to put the data to use

In addition, the Center has served as a space for the convening of the urban poor and others, including other civil society organizations, journalists, development partners, and individuals interested in the Federation’s work. Through these interactions the Federation has shared – through words and visual representation – their data-driven priorities, opening a perspective on Lagos rarely seen by politicians and the upper classes.

The impact of this Center is felt far beyond Lagos as well, as it has and will continue to serve as the convening place for exchanges of new Federation chapters from elsewhere in Nigeria and West Africa, as well as a growing repository for information about communities that is for communities. As the Nigerian Federation continues to grow, the Center will continue to be its base, the point from which the Federation will launch new chapters across Africa’s most populous country in the coming years.

Check back here in the coming days part two of this post which focuses on SDI’s collaboration with the African Association of Planning Schools to undertake analysis of data, packaging and engagement with city authorities around the use of data in three cities in Kenya.