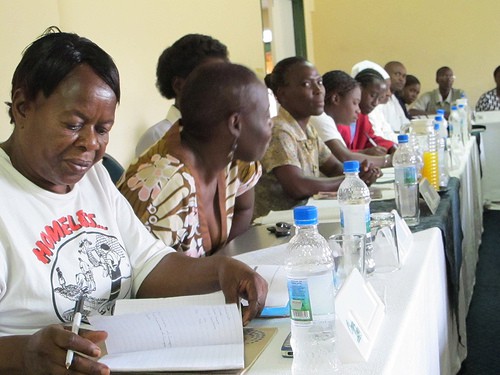 One of the key challenges of urban poverty is to find people-driven solutions to housing finance. An innovation of many federations in the SDI network has been to develop what are known as “urban poor funds.” All federations in the alliance practice daily savings as a means for community organization. These savings can often be used for various kinds of micro-credit as well, though their primary purpose is, as a general rule, to bind communities together, get them to unite around their own problems and their own resources.

But any member of a saving scheme can withdraw their savings at any time. There is nothing keep that person in a saving scheme except their own ties to their community and their specific scheme. The money always remains theirs. Federations that have been around for some time — what is known in the SDI lingo as a “mature” federation — soon realize that in order to develop at any kind of scale, they need to search for ways to come up with a committed, revolving finance facility: the urban poor fund.

Though an urban poor fund operates in different ways in different countries, the basic idea is the same. Each federation member commits a non-refundable amount of money that will initiate the fund. In South Africa, just to give one example, this commitment has a value of approximately US$100. The idea is that these funds that come from organized communities of the urban poor will attract more from outside sources like governments, donors and the private sector. Then, the fund can begin giving out loans to federation members to build houses, start businesses, buy land, and install services. If the loans are repaid then the fund “revolves,” meaning that the money can be loaned out again to someone else. For an excellent summary and analysis of the different kinds of urban poor funds that exist within the SDI alliance, a paper by Diana Mitlin, our colleague at the International Institute for Environment and Development, is a worthwhile guide: “Urban Poor Funds: development by the people for the people” (pdf).

It is a powerful tool for development that really puts organized communities of the urban poor at the center of their own development. So what happens when the fund essentially vanishes — nearly overnight? Sounds devastating. But this is exactly what the Zimbabwean Homeless People’s Federation experienced when their fund, called the Gungano Fund, fell prey to the cruelties of hyperinflation that wrecked the Zimbabwean economy in 2008.

Federation members were determined to keep it going. Still anxious to continue repaying outstanding loans, members developed a system they called dombo-to-dombo (stone-for-stone), where instead of repaying in money, they repaid in material supplies for which they calculated an approximate worth.

With the introduction of the US dollar and South African rand as replacement currencies for the Zimbabwean dollar, the federation is now looking to restore the Gungano fund. I had the privilege of being part of a two-day reflection meeting that the Zimbabwean federation held in Harare at the end of January to discuss how to take the fund forward. My colleague Louise Cobbett and I have a full report of this meeting up at the main SDI website which goes through all of the issues raised and resolved around the fund and how it ties into the greater work of the federation.

It takes the kind of unity forged through savings, information gathering, and — in the case of the Zimbabwean federation — the common traumas of economic hardship, disease, and state-directed violence, to address such a difficult, innovative facility like the urban poor fund with the creativity and seriousness I saw at this meeting. With “urban poor funds,” “community development funds,” and similar terms becoming buzz words in the so-called “urban development sector,” the urban poor themselves are providing some of the most creative, effective examples of how these can actually operate.