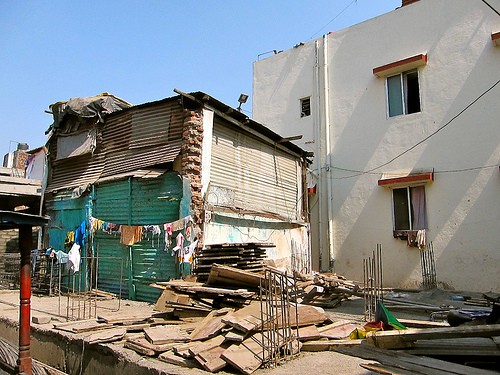 In March I came across Mukta Naik’s piece for Global Urbanist blog on her firm’s involvement in a project to redevelop two slum clusters in Delhi as part of the national Rajiv Awas Yojana (RAY) housing scheme. While her piece highlights a number of key principles in the creation of cities that include rather than marginalize the urban poor – arguing, for example, for in situ upgrading rather than relocation, and the central participation of slum dwellers in the planning process – I felt as though in the end, there was at least one critical departure from my take on the role of slum dwellers in the production of future cities. Naik concludes her piece with a statement that, “in the end, many of the demands of slum dwellers are not implementable” and the onus lies on the urban planning professionals, architects and engineers to advocate on their behalf for more realistic solutions, and to convince local governments of their rationale and viability.

The experience of urban grassroots social movements and individual communities proves that slum dwellers are more than capable of devising realistic, implementable, solutions to their own housing and infrastructure needs. Although the process may be longer than one driven by professionals, its success is often more sustainable, and more relevant – characteristics that benefit both the government and the slum dwellers in the long term. To this end, local governments across India and the developing world have in many cases (and often after much negotiation, exchange visits to other projects, and even some heated disagreements) been brought into the process, convinced of the viability of these projects, and seen the concrete benefits of involving communities in all stages of the upgrading process – from planning to design to construction to maintenance. In addition, I would argue that the role of the professional is not to provide the right answers, but instead to ask the right questions; not to advocate for the urban poor, but rather to support their voice so that they can  advocate for their own needs and, ultimately, their own solutions.

One of the most notable examples of this is happening 1,500 kilometers from the scene of Naik’s article, in Pune, India, the second largest city in Maharashtra state after the megacity of Mumbai. Here, organized communities of the urban poor have been working for roughly twenty years to build a social movement that results in concrete improvements in the lives of slum dwellers. This alliance includes a national collective of women’s savings groups, Mahila Milan, a national slum dweller federation, NSDF, and their support NGO, SPARC

During a trip to Pune in January, I met the leaders of Pune’s Mahila Milan (MM) in their local office above a community toilet project constructed and managed by the women of MM. This group of women manages projects ranging from housing construction to water and sanitation to large-scale government-sponsored resettlements. Starting with management of daily savings, the MM women have learnt the necessary skills for management and coordination of human as well as financial resources.

Pune’s Mahila Milan began their upgrading work by taking up an in-situ upgrading project for 1,200 households in the settlement of Yerwada under the Jawaharlal Nehru National Urban Renewal Mission’s (JNNURM) Basic Services to the Urban Poor scheme (BSUP).  Here, old tin shacks have been torn down and replaced with one, two and three-story single and multiple family homes in the style of townhouses and small apartment blocks. Inevitably, political battles crop up during this aspect of such projects. The process of demolition and reconstruction requires the facilitation of intense negotiation by MM’s members and leaders. The ways of managing these grievances are maybe the most important lesson of all, and highlights MM’s integral role in the process.

In Yerwada, MM have driven all aspects of the project: from community mobilization to design of re-blocking plans and upgraded houses to negotiations with city government around building regulations and provision of infrastructure and basic services. Using social technologies such as self-enumeration, community mapping, and daily savings, the women of Mahila Milan have been able to engage at all levels, bringing empowering tools and information to both the people on the ground and the officials in town hall.

One of the most fascinating things about this project is the use of space. Most of the homes’ footprints are no bigger than 250 square feet. By adding a second floor, this footprint is nearly doubled, allowing extended families to live comfortably together. One woman’s home is a narrow triangle of only 170 square feet. The second story nearly doubles this, and MM has ensured that she has permission from the municipality to build a third story once she can afford it.

In addition to reconstructing the homes, MM worked hard in Yerwada to realign the structures, widening pathways and making space for municipal water, sewerage and electricity connections. Management of construction was made easier thanks to MM’s direct involvement as overseers of the construction process. Footpaths, widened from crevices to lovely pathways, are now lit by street lamps. MM worked with the families to construct homes suited to their needs and personal aesthetic. Homes are painted bright colors, and front doors hung with bright flowers. It is clear that this is a community. Not a slum. Not an informal settlement. It is a neighborhood, with families living and working, improving their homes and walking their kids home from school.

Prior to PMM’s involvement in slum upgrading in Pune, city government had experienced local resistance in their attempts at slum upgrading. This was due largely to a lack of community involvement in the development of upgrading plans. The state was proposing high-rise housing projects or individual subsidies and loans, neither of which appealed to the communities. Once Pune’s MM got involved, they were able to assist the wider community to develop housing solutions for in situ development and relocation that are at the same time community designed and delivered and viable in the eyes of the city government. So far, Pune MM has constructed roughly 3,000 units in situ across Pune using a blend of subsidies, loans, and community contributions.

These citywide successes provide an important node for learning across a transnational network of organized slum dweller federations that spans the Global South.  Groups of slum dwellers, support professionals and government officials from across India and the developing world travel frequently to Pune to learn from the experiences of the Pune MM and city officials. In the past few years, these exchanges have inspired groups from neighboring Orissa to South Africa to Brazil as to the power of community participation in the upgrading process.

In addition to serving as a center of learning, Pune has become an example of successful slum upgrading for the wider urban development community. Students from Pune University and KRVIA in Mumbai, as well as universities in Sweden, Australia and the United States have all traveled to Pune for research work and urban planning studios.

The upgrading experience in Pune clearly disputes claims that slum dwellers are not capable of conceiving and implementing their own solutions. Of course, professional expertise is often necessary in implementing large-scale upgrading projects, but it must be deployed in ways that support the experience-based knowledge of slum dweller communities. Indeed, it is this experience, skill, and history that led this community to come into being in the first place. We have to constantly be thinking and acting with the question in our mind: Does this further marginalize the urban poor? Does my work as a professional minimize the decision-making influence of residents in planning for physical upgrades that will affect their lives? Do my thoughts, actions and words serve the creation of an inclusive city, or a fragmented one, where the urban poor are kept on the periphery?

For it has been proven that through the mobilization of organized slum dweller federations like Pune’s Mahila Milan, the urban poor can take the reigns of their own development, and that city governments are often quite happy to come on board.