Urban Upgrading in the Spontaneous Zones Of Ouagadougou 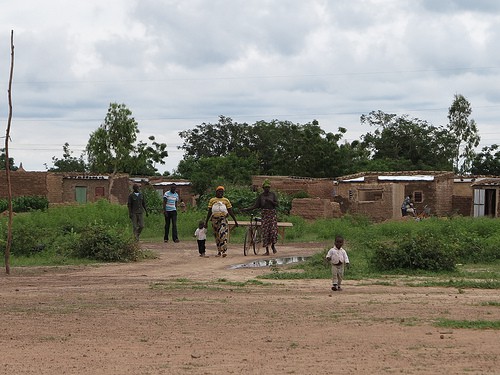 Sustainability is the anthem of the generation. NGO’s have moved from projects formulated a decade ago, where a building was built or a bag of rice given with few programs informing locals on how to maintain said building or plant rice in order to feed themselves in seasons to come, to programs which try to address the question of what will happen when said program ends. Although this is a step in the right direction, it may be wise to re-evaluate the programs we are currently implementing and ask ourselves a question we should have been asking all along: “Are we any closer to a day when programs like this one will no longer be needed?” Questions like this should be forefront of all programs, especially in terms of urban development, if we intend to meet the UN’s Millennium Development Goal.

Urban upgrading programs are not a new phenomenon in Burkina Faso’s capital city, Ouagadougou. Its history goes all the way back to 1974 when the UNDP implemented the Cissin Slum Upgrading Program. Since this project, various NGOs and foreign governments, including France and the Netherlands, have built upon the Cissin Slum Upgrading Program or have implemented their own urban upgrading project, often times with the support of the government.  Although these programs successfully decreased irregular and informal settlements in the city up until the late 1990s, they have been unable to manage the increase in urban populations that have taken place in the past decade and have rarely addressed service provisions or facilities in these once informal areas. Due to these flaws, Ouagadougou has continued to struggle with the management and inclusion of “spontaneous zones” (preferred term for the informal settlements of Ouagadougou) in their urban development plans.

Ouagadougou has a population of 1,475,223 inhabitants; about half of the total urban population, but it is unclear whether or not this number includes the inhabitants of the spontaneous zones surrounding the city limits. According to the residents of these zones, housing is still a struggle in Ouagadougou. Walking through the spontaneous zones, you are met with simple mud brick houses (often constructed by the slum dwellers themselves) often separated by slim dirt pathways leading to either the community water pump, the occasional school, or to a main road entering Ouagadougou city (there are wider unpaved roads where cars can access these spontaneous zones more easily). The homes often are two rooms, holding families averaging 7 people. The majority of these households have access to traditional pit latrines, since the community is rarely connected to the water supply system. Although the majority of the population have roofs over their heads, these zones face vast inadequacies in service provision, a very low level of sanitation, and insufficient road networks. 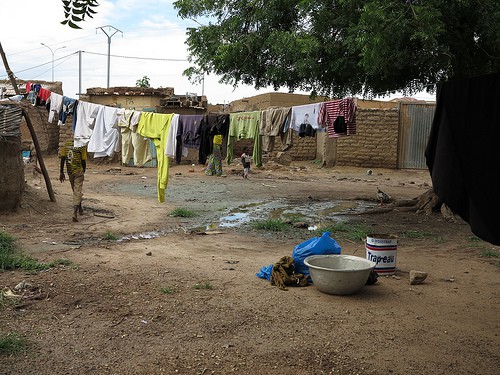 However, despite these challenges, a significant characteristic of these spontaneous zones is that they do posses regular plots. Burkina’s urban planning relies heavily on the 1984 Land Tenure Reform Act, where the land is nationalized and the government sells land by lotissement (subdivision). Between the years of 1983 and 1990, the government implemented a national urban upgrading program in both Ouagadougou and Bobo-Dioulasso, where more the 125,000 plots were regularized and as a direct result the amount of unplanned areas of these cities were rapidly reduced. Today this lotissement policy is difficult to implement due to market liberalization which has led to an increase in land speculation. Despite the government’s interventions in slum upgrading, the city’s population continues to grow and spontaneous zones are consistently expanding, and due to the lack of investment in infrastructure and service provisions, the zones’ populations continue to live in poor living conditions.

In August 2012, Ouagadougou finished phase two of UN Habitat’s Participatory Slum Upgrading Program (PSUP), one of the newest slum upgrading programs in Burkina Faso. According to the UN Habitat website, “[t]he programme’s purpose is to strengthen capacity of local, central and regional institutions and key stakeholders’ in settlement and slum improvement through the use of good governance and management approaches, pilot projects and contributing, where needed, to the policy development, and the implementation of institutional, legislative, financial, and normative and implementation frameworks” (www.unhabitat.org/content.asp?typeid=19&catid=592&cid=10980). Using enumeration and profiling techniques conducted by a team made up of urban planners, representatives of the municipality of Ouagadougou, the national government, and key stakeholders(including the participation of community members), PSUP has profiled and mapped three spontaneous zones to provide a better understanding of the organization of the settlements. Presented with this information, the community then chose the projects they feel are most needed in their communities. Implementation of these projects will take place during Phase 3 of PSUP, which is scheduled to begin in January 2013 after the parliamentary elections in Ouagadougou in December.

Although not a new concept, the PSUP’s approach to engaging government institutions in slum upgrading is taking a step in the right direction. Furthermore, as a large project, smaller organizations are able to play a supporting role in the implementation of more grass-root projects which can help sustain the work the PSUP has done in these informal zones. SDI and UCLGA’s Know Your City project is a perfect fit for this role. Similar to the PSUP, the Know Your City project relies on enumerations and mapping as a means of community upgrading; however, our approach is completely community driven, providing a means of mobilising the population to begin upgrading on their own terms. As the PSUP focuses more of its attention on the capacity building of local and national authorities and collaboration between all institutions, Know Your City uses a bottom-up approach empowering the community and its members to take a more active role in their settlement upgrading. Together these programs will enable the empowerment of both groups allowing for a plethora of ideas to be exchanged and the creation of a strong bond and understanding between the national and local government, along with city planners and other key stakeholders’, and the slum populations.

Many factors need to be aligned for a project to endure long after its original architects and designers have left it to its own devices. More than sustainable, projects need to be able to evolve and shift to better fit the world’s ever-changing state. Under this understanding, the overall goal is that current upgrading projects will address the problems of today’s developing world so that future projects focusing on this same issue are unnecessary. So the question remains, will the collaborative programs of SDI and UN Habitat lead to less of a need for slum upgrading projects or will we both merely be adding to the plethora of attempted programs that have yet to make a significant impact? Only time will tell but as slum populations take hold of their own upgrading and begin collaborating with local authorities to plan more inclusive cities, the need for external interference in urban development will likely decrease.