In Tanzania, Scaling Up Sanitation for the Urban Poor 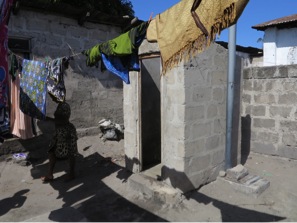 The improvement of sanitation in urban informal settlements in Africa is one of the key upgrading strategies that can make a tangible difference in poor communities. Through a joint action research project titled SHARE (Sanitation and Hygiene Applied Research for Equity) communities in Zimbabwe, Tanzania, Malawi and Zambia are using the SDI rituals of community-driven enumerations, profiling and mapping to outline the obstacles to achieving pro-poor citywide sanitation. The next phase of the project calls on the countries to build precedent setting pilot projects based on the information collected.

At a recent meeting in Tanzania each country reflected on progress made and the way forward. Discussions and presentations focused on how to use the information gathered (situational analysis) to generate political momentum, leverage resources, forge partnerships, create awareness and go to scale. Discussions were complemented by a visit to Keko Machungwa informal settlement to see latrines built by the Tanzanian federation and to Chamasi housing project where the group saw a constructed wetland, built to treat wastewater. A team from Uganda with experience in building and managing communal toilet facilities was also present throughout the 3-day meeting and significantly added to the discussions.

As the precedent setting phase of the project starts in earnest, federation members also discussed the key challenges as outlined by the situational analyses. This blog focuses on extracts from two presentations given by the Tanzanian federation – one about the research conducted and the second about likely precedents to address the challenges identified in the research phase. It is hoped that these details will give the reader a flavor of the challenges federations face in providing pro-poor sanitation at scale and the incremental steps employed to tackle these complexities. 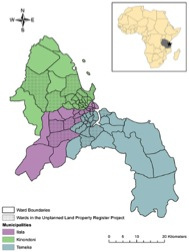 Dar-es-Salaam has a current approximate population of 4 million which is growing by 8% P.A.

The Tanzanian federation undertook a surveying and mapping exercise of sanitation conditions in existing settlements. While pit latrine coverage was high, the conditions of many toilets was extremely poor. Some key findings included:

Pit emptying can be dangerous and unhygienic.

GIS was used to map the toilet type and location within informal settlements such as Keko Machungwa. The mapping process was done with the assistance of the community and local officials.

Toilets presented in the map: 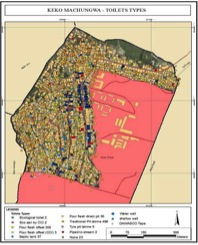 Dissemination and outputs for the Tanzanian federation:

From the above extracts the reader should have a sense of some of the challenges that the Tanzanian federation faces. Even though there is a relatively high coverage of latrines, they are in a very poor condition and emptying them is costly and difficult.

The second presentation given by the Tanzanian team outlines some of the precedents they will use to address the above challenges. 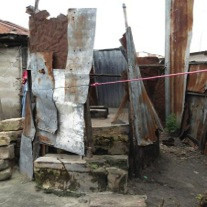 Discussion was done with federation members and they identified precedents based on situational analysis results:

Meetings took place between local government authorities and the federation members in order to discuss the results and identify the precedents: 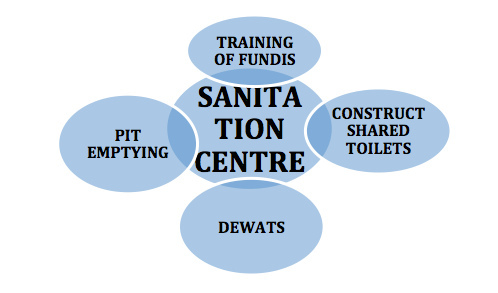 How precedents will facilitate scaling up: