From the Bottom Up: Connecting SDI to Global Urban Development Processes 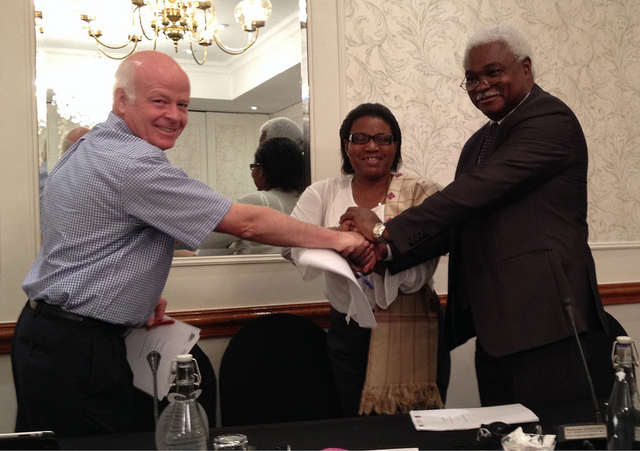 The experience of federations of the urban poor that make up the SDI network underlines the interconnections of actions that impact both locally and globally. Every time a foreign corporation, government, or other type of organization expresses interest in land or development in a city or in a country, it impacts the everyday lives of the poor. The people who live in cities, and their governments, face constant external pressures regarding the choices that determine whether ordinary poor people have access to land, services, shelter, and economic opportunity.

The challenge, then, is to build organizations and alliances able to balance the influence of powerful global processes with local needs to make urbanization work for all. The lesson here is that local actors, especially in city government, through exploring the potential of working and supporting citywide federations of the urban poor, become more effective in managing these processes.

At the global level, SDI is increasingly serving as a platform for allowing representatives of organized urban poor constituencies to speak directly with decision-makers in major international organizations and forums. The aim and impact of these interactions is to strengthen the local processes through which federations form and build citywide alliances. How do they do it?

First, by building new mechanisms for accessing and managing the financial resources required for an inclusive vision of development. The global financial flows that drive city development comprise a juggernaut in comparison to the amounts of money the federations of savings schemes collect. However, these savings serve as the basis for creating citywide funds to finance informal settlement upgrading projects and employment generation projects. Savings also builds financial literacy and management skills amongst the organizations of the poor in order to take up projects to upgrade and improve their settlements with the city 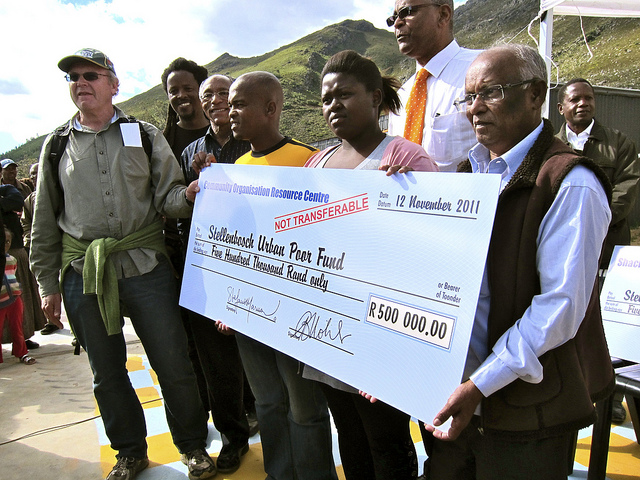 Even more promising is the spread of citywide funds that are joint endeavors between city governments and city federations. These institutions have begun to get formalized in different forms in cities in South Africa, Uganda and Zimbabwe. They provide the space for city governments and federations to work together to leverage resources within government, within communities, as well as from external institutions in the private sector. These are quintessential examples of the ways in which urban poor federations are a mechanism through which city governments can get a handle on flows of finance that impact urbanization.

In Zimbabwe, Dialogue on Shelter, an NGO affiliated with Shack/Slum Dwellers International (SDI) is in the final stages of negotiating the terms of a citywide fund with the City of Harare. The fund is a practical financial instrument reflective of the partnership between the Zimbabwean SDI alliance and the city, creating shared political and financial responsibility for slum upgrading.

The fund will comprise of financial contributions from SDI, the City of Harare and the Zimbabwe Homeless People’s Federation. Other donors have also expressed an interest in contributing to the fund, making it a possible conduit for finances to flow from donors to the urban poor. Not only does this blending of finance create an attractive mechanism to which various parties can contribute but it is a manner in which the participating parties can hold each other accountable.

The negotiations about the fund’s financial structure reflect a concrete manner in which groups of the urban poor can influence financial flows that directly affect their lives. Opening this political space for communities to articulate their needs at a citywide decision-making level is core to SDI’s role, and in the case of Zimbabwe, reflective of long-term partnership building. The Zimbabwean federation argued for the fund to focus on incremental settlement upgrading as opposed to only housing, forwarded loan provision and repayment strategies based on their experiences of daily savings, addressed issues of affordability and planned to extend loans to non-federation members.

This is a clear example of how a voice of the urban poor can negotiate changes that have the potential for citywide impact in a manner beneficial to the poor and more contextualized in “on the ground” circumstances.

The calculation shifts. No longer is it a struggle of poor people to self-finance improvements to their settlements amidst national and global processes that often increase the vulnerability of the poor. Rather, poor people’s organizations and city governments are now working together to generate internal and external financial power to achieve the kinds of infrastructure improvements that reduce vulnerability and increase opportunity.

SDI’s global reach then allows for these experiences to add up through exchanges amongst cities, and exposure of agencies and corporations in both the private and public sectors. Now, globalized flows of finance are beginning to contend with the alternative approaches that SDI federations are enabling at the local level.

Second, the dearth of information about informal settlements persists, even amidst global trends of “big data,” “city sensing,” etc. With over 9000 city profiles and 4000 enumerations, SDI federations are becoming world leaders in generating data about informal life in cities. In partnership with the Santa Fe Institute, with a focus on uncovering complex processes of development, SDI federations are finding new ways to use their data to show the hidden side of vulnerability and survival that is the daily experience of the urban poor. Instead of being invisible, or having their homes and livelihoods thought of merely as hotbeds of crime and disease, urban poor federations are making the case, through hard data, that informal settlements have the potential to be the engines for more inclusive strategies of city development.

In Uganda, the National Slum Dwellers Federation (NSDFU) acknowledges that “Knowledge is Power” and that this power is something that slum dwellers on the ground can wield if they are organized.  To this end, NSDFU has completed five citywide slum enumerations in the secondary cities of Jinja, Arua, Mbale, Mbarara, and Kabale. The Federation understands that this information, gathered by communities, is trusted and more accurate because of the participatory approach employed.  In each of these five municipalities the information collected has been used to plan slum upgrading projects and prioritize future projects.  The information has also been central in negotiations with local authorities and has been used in Municipal Development Forums to lobby for upgrading funds and improved services. In addition, the data has been used by municipal planning and budgeting committees, helping federation members to gain seats on these committees.  The information is also used internally by the federation to guide project planning, highlighting communities’ needs. For example, in Mbale the federation’s data collection skills resulted in the municipality employing federation members and using their tools to help collect informal household and informal market data which will be used to inform city wide development plans by communities and local authorities.

Bit by bit, this information is showing policy-makers and global decision-makers that development that is equitable and sustainable is impossible without addressing the needs and vulnerabilities of the poor. This is particularly so with respect to prioritizing basic infrastructure and shelter. Likewise, this requires prioritizing economic development approaches that finally recognize the strategies that people in informal settlements use to survive and, sometimes, thrive. 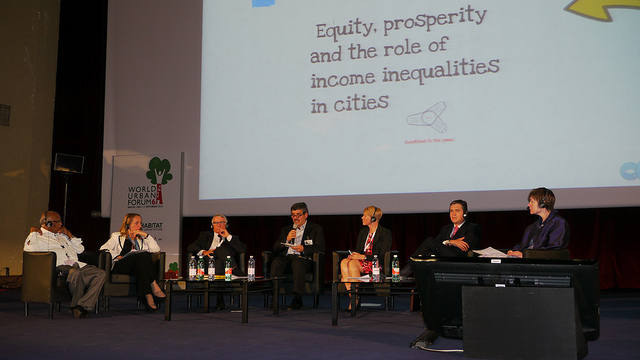 Jockin Arputham speaks on a panel at a plenary session at World Urban Forum 6 in Naples, Italy.

Third and finally, urban poor federations in the SDI network are not letting the data and the experts do the talking for them. Instead, they attend global forums and present their own understanding of the power of relationships of learning, and share its impact on their long-standing approaches to negotiation and exchange. Through peer exchanges, the strategies of learning and negotiations undertaken in one country are shared across SDI. As these practices demonstrate their application in different countries and in different contexts they can be presented externally as possible strategies for governments and development agencies to explore.

SDI federations have a long tradition of taking their partners in city governments with them as they travel to other cities and countries. In this way, federations in countries such as India, Kenya, Malawi, Philippines, South Africa, Uganda, Zambia, and Zimbabwe, have utilized international forums and exchange programs to help build more inclusive and participatory institutions at the national and city level for making decisions about developmental priorities and programs. 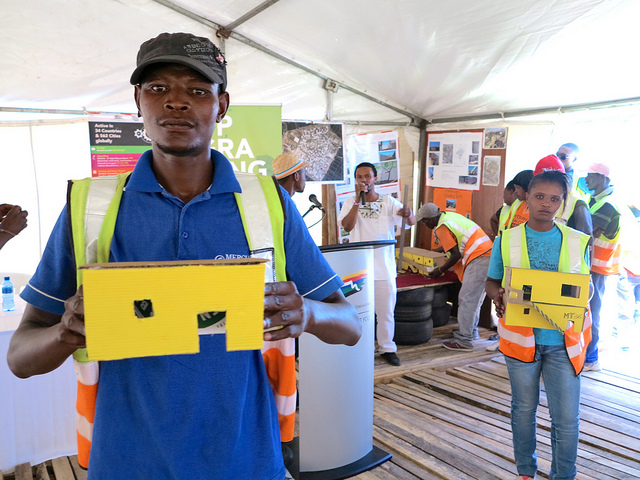 Changing the Approach to Upgrading: Expanding Learning in Southern Africa

In South Africa, the local SDI Alliance, in partnership with the City of Cape Town, is engaged in pilot upgrading projects in 22 settlements across the city. The Alliance’s work in one of these settlements, Mtshini Wam, which has included re-blocking and upgrading of shacks, has drawn local, national and international attention and has contributed to the drafting of a re-blocking policy for slum upgrading in Cape Town. In addition, technical teams from support NGOs iKhayalami and CORC have expanded training workshops for the Federation of the Urban Poor (FEDUP), the Informal Settlement Network (ISN), and local communities beyond Cape Town and Stellenbosch to settlements in the provinces of the Eastern Cape, KwaZulu-Natal and Gauteng. As a result, communities have begun working with government to develop settlement plans that involve upgraded services and homes.

These skills and learning are being transferred to other affiliates through international learning exchanges. In March 2013, a delegation from the Namibian SDI affiliate, accompanied by a delegation from the Gobabis local municipality, traveled to Stellenbosch, South Africa to learn about the impact of linking enumerations to slum upgrading. Following this interaction, the Gobabis municipality resolved to work with the local community on the re-blocking of settlements in their municipality.

To read more on how starting from the bottom up and connecting on-the-ground activities to global urban development processes leads to effective change, read our 2012 / 2013 Annual Report.

SDI at COP27: Amplifying Voices of the Urban ...

By Ariana Karamallis, Programme Coordinator for Advocacy and Resilience at the SDI Secretariat From 6...