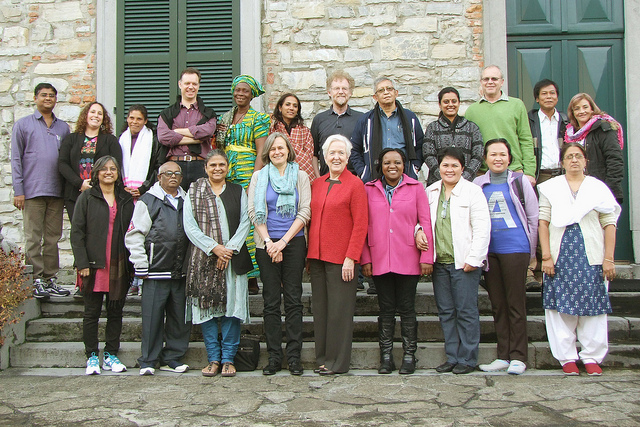 The struggles of grassroots organizations for livelihoods and shelter have much in common. Organizations explored this common ground at a recent meeting, says Diana Mitlin.

Close to a billion people – one in seven of the world’s population – live in informal settlements in the towns and cities of the global South, where they lack both secure livelihoods with adequate incomes, and secure housing with adequate basic services.

Yet urban development programmes tend to serve these people poorly, in part because they focus either on work and incomes or on shelter, tenure and basic services. These divisions reflect neither the realities of people’s lives nor the inter-connected nature of the challenges they face. Poor housing affects people’s livelihoods, as when shacks burn down and people lose scarce possessions or when people fall ill because of inadequate sanitation provision and are unable to work.

Such realities are encouraging grassroots movements and their support agencies to share ideas about how to address these people’s needs with strategies that target BOTH shelter and livelihoods.

On 22 November representatives from the Asian Coalition for Housing Rights, Red LACRE (the Latin American Network of Recyclers), the Self-Employed Women’s Association (SEWA), Slum/Shack Dwellers International (SDI) and StreetNet International (an alliance of street vendors) met in Bellagio, Italy to share their approaches. The meeting was hosted by the Rockefeller Foundation, with participation from Asiye eTafuleni (Durban), IIED and Women in Informal Employment: Globalizing and Organizing (WIEGO) to support the discussions.

Participants shared a host of ideas:

All agreed that they had something to learn – and knowledge to share. Here are some key themes, which were consistently repeated as central to improved livelihoods and shelter.

Many of the problems low-income people in urban centres face are the same from city to city. They stem from the same narrow vision about what successful cities should look like, the influence internationally mobile capital has on how city centres and high-income neighbourhoods are formed, and (for many nations) increasing income inequalities and high levels of poverty.

These factors help to exclude the urban poor from basic services and secure livelihoods on a scale that is staggering.

One billion people – close to one in seven of the global population – live in informal urban neighbourhoods that lack at least one basic service and/or have unsafe housing. Even the most basic of services, piped water, is frequently not available – or only at a price.  Hundreds of millions of urban dwellers have no toilet in their home.

Perhaps as many as a billion people work in the informal economy. Typically incomes are low and insecure, and working conditions are very poor. Over 60 percent of all urban employment in Africa is estimated to be informal, and in India the figure exceeds 80 percent.

Trade unions and associations of informal workers bring together all those working in one industry or trade, identify the laws or practices that need to be changed to protect trading spaces (for example for market vendors) or to access the materials they need (in the case of recyclers). They provide solidarity for those harassed while working alone on the streets or waste dumps, and who face exploitative contractual arrangements. The most successful improve incomes and assets, and may secure safer working conditions – BUT they do little to reduce the costs of rent, water and other essentials, or ensure people have a chance to live close to working opportunities.

Urban social movements work to improve access to water, land and/or housing. Women are often active members as they bear most of the costs of inadequate services. Actions focus on securing homes with basic services and reducing women’s burdens alongside improving living conditions. Local solidarity groups are formed as residents work with their neighbours. Groups frequently undertake their own improvements and lobby their local governments for support.

The representatives from grassroots organisations and networks at the meeting agreed that greater collaboration offered much to their on-going work. They were also excited by the potential broadening of their alliances to strengthen their work and amplify their voices in urban development debates. They also recognised that such collaboration should not be at the expense of weakening their base organisations and day-to-day activities.

They agreed to explore, through international exchanges, the potential value of each other’s practices. Proposals included:

They also agreed that they could make a useful contribution to each other’s events at global meetings such as the World Urban Forum to ensure that events seeking to address urban poverty give the urban poor and their representative organizations a voice, and put them at the centre of activities.

Already these networks assert the right to speak and struggle to advance their opportunities and define new choices. They also claim the right to be involved in the policies and programmes supposedly there to support them. Learning from each other, and finding solidarity together, they are better positioned to address the scale of poverty and inequality in towns and cities across the global South. Together, they are stronger.