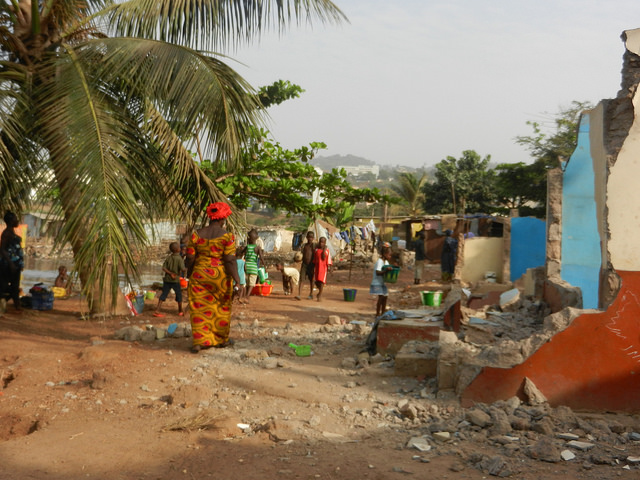 Thousands of people living in informal settlements lack security of tenure placing them at high risk for forced evictions. In the past few months many SDI affiliates in West Africa have faced evictions – Badia East settlement in Lagos, Nigeria, Adjei Kojo settlement in TEMA municipality in Accra, Ghana, and Kroo Bay in Freetown, Sierra Leone. Most of the SDI affiliates in the West African region began in response to the need to organize communities to stave off eviction threats. In 2003, the SDI methodologies for fighting eviction through community-based data collection were introduced to community members in Old Fadama, the largest slum in Accra. The community was able to organize itself and conduct an enumeration that indicated that over 79,000 people lived in the slum, a number that had been grossly underestimated by government. The federation used enumeration findings to negotiate with government to find alternatives to eviction. The Federation has gained recognition and legitimacy as an organized network of poor communities that work with local government towards pro-poor development strategies. The response in Old Fadama can not only help other settlements in Accra and the rest of Ghana but can also serve as a learning experience to other newer affiliates in the region.

From the 10-14 of February this year, SDI delegates from West Africa – Ghana, Sierra Leone, Liberia, Togo, Nigeria, and Burkina Faso met in Freetown to for their regional hub meeting. The hub meetings provide a platform for regional affiliates to create and strengthen links across the region, to share and learn from each other, as well as support newer affiliate countries in developing their own local processes. West Africa, the youngest of the SDI regions, is still developing how to best strategically use this space to strengthen and support the region. This meeting focused not only on deepening the SDI rituals that are crucial for federation development, but also key issues facing the region such as forced evictions. Delegates of the meeting were able to see first hand the challenges Sierra Leone is facing. Not far from where the meeting was convened is Kroo Bay, a settlement that has faced multiple evictions over the years and was the site of a recent eviction.

Kroo Bay is one of Freetown’s waterfront slums. Slums such as Kroo Bay are situated on land in which the occupants have engaged in the process of land reclamation by slowly adding soil and sand to build up and create new land on the coast. Although this is done with the slum dwellers own resources and time, government frequently claims ownership of this land. According to Freetown City Council (FCC), Kroo Bay is prime land and Government has the mandate to take back the land at any given time. A section of Kroo Bay settlement is built along the boundary of the most prestigious schools in Freetown, The Prince of Wales Secondary School for Boys. This is a school in which many previous officials or those with influence have attended. On Saturday, 25th January 2014 the Alumni Association of Prince of Wales used its influence to hire police, military and other individuals to vandalize and demolish the houses in this area. The action was undertaken on the assumption that this strip of land belongs to the school. However residents assert their claim to this land through the land reclamation process and that their presence has protected the school from flooding and rising sea levels. 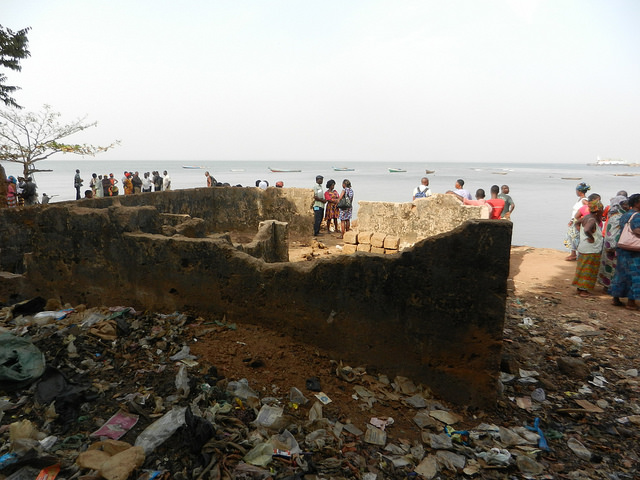 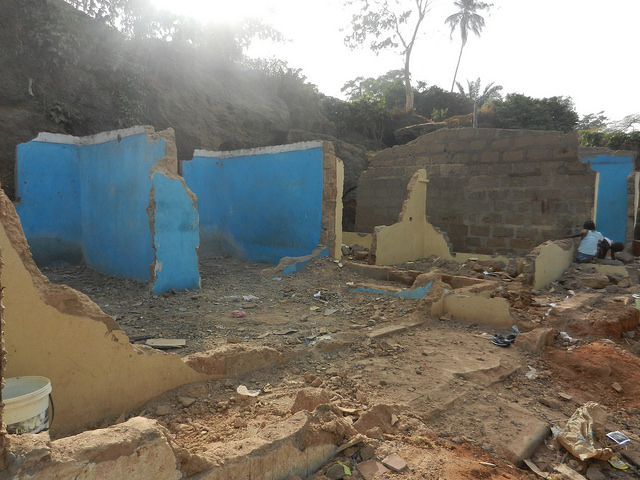 As part of the hub meeting delegates participated in a field visit to Kroo Bay. During this time delegates were able to talk to community members and gain a better understanding of the challenges they face. Following these engagements, discussions at the hub focused on how best to move from a reactive response to evictions to proactive strategies that engage local government.

Sierra Leone, as host of the regional meeting, was able to use this platform as a means to strategically capitalize on its engagement with government. In December 2011 the Sierra Leone affiliate began negotiations with local government over the provision of a piece of land for a community-led housing demonstration project to benefit the slum dwellers of Kroo Bay. A series of engagement sessions were held and site visits were conducted. Given the high demand for land within the city centre, government through the Ministry of Lands could not identify a piece of land within the city center and ended up allocating a piece of land (2.5 acres) in Grafton community for the project. After multiple attempts to engage with local government over this piece of land the process had stalled. By hosting the hub meeting the Sierra Leone Federation of Urban and Rural Poor (FEDURP) and its support NGO, Centre of Dialogue on Human Settlement and Poverty Alleviation (CODOHSAPA) were able to demonstrate to local government the power and strength of a network of organized slum dwellers, not only just in Sierra Leone, but also across West Africa.

The Deputy Minister of Lands, Country Planning, and Environment, Hon. Ahmed Kanu, paid a courtesy visit to the hub meeting where he expressed a recommitment to the project on behalf of government and the Ministry of Lands.  He expressed his delight to be part of the movement and shared how it fits into the country’s “Agenda for Change” program that aims to alleviate poverty, in which affordable housing is a key output. Additionally to show his support a meeting was held the following day to discuss the piece of land as well as an ongoing partnership with FEDURP and CODOHSAPA. A smaller team from the hub attended the meeting with the Deputy Minister and two surveyors to solidify the commitment from the Ministry. At this time the affiliate presented the Ministry with a communiqué calling on the Municipality to support pro-poor policies and practices by working with the federation as well as fulfill its promise and materialize its commitment by providing a piece of land for an affordable housing project. Media personnel were also present and captured the engagement, which ran on the evening news as well as in the local papers. 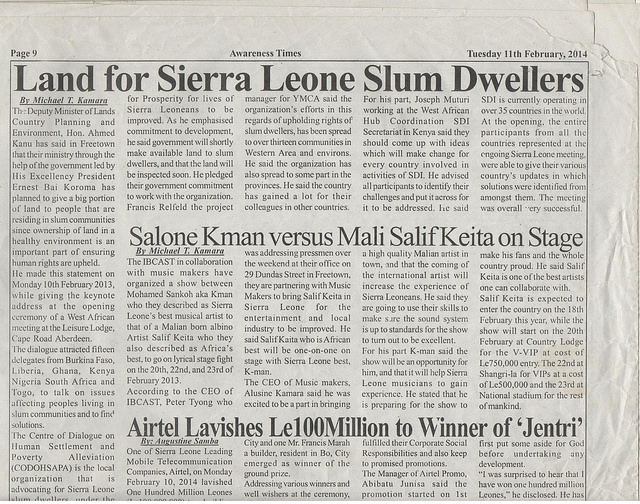 This momentum has opened doors to the Ministry and they now need to deepen and strengthen the relationship through continual engagement, not only around the piece of land but to strategically include the Ministry as a partner in other projects. Having an ally in the Ministry can allow the federation to scale its activities and projects from a settlement level to a citywide level.

Conversations are currently being held in Sierra Leone to think through how to strategically use this piece of land to promote a pro-poor urban development agenda. How this piece of land and housing demonstration project can be used not only to push the their agenda but to also be a precedent setting project that allows the federation and government to invest in similar upgrading projects across the city as well as in other cities.

Through platforms like the hub, communities are able to share challenges and lessons learned to develop strategies that are responsive to their own local context. More established affiliates such as Ghana and their experience of engaging government around alternatives to evictions can be a tool to others who are still developing their own strategies. Crucial to this meeting was understanding how communities must evolve from short term reactive responses (providing relief after eviction) to a long term proactive strategies to engage and negotiate with government prior to evictions and develop pro-poor inclusive alternatives.

A new report published in the Field Actions Science Reports aims at voicing the urban...