Shaping Human Settlements Through Partnerships Between Slum Dwellers and Academia 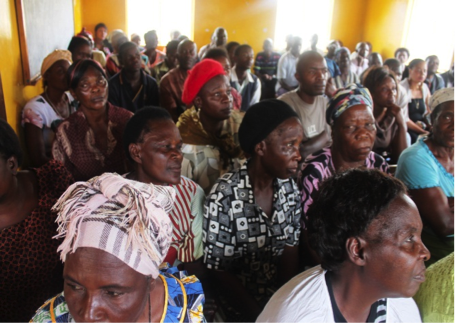 It is indisputable that the urban poor have the propensity to drive socio-economic transformation in their respective settlements through a coherent and systematic process of organized participation starting at the grassroots level. Vital to this transformation is the need to establish a powerful relationship between communities, local authorities and central governments – with government playing a powerful role in developing policies that directly affect the urban poor. In Zambia, and other developing countries, policy implementation remains a big challenge owing to the failure of officials to fully comprehend the realities on the ground and actively include grassroots communities in the development processes that affect their lives.

In an attempt to enhance mutual learning and planning with communities, the Zambian SDI alliance partnered with the University of Zambia’s (UNZA) Spatial Planning masters students to put theory into practice- conducting a participatory urban planning studio. The students are mostly officials from local and central government, as well as from other civil society organizations. It is envisioned that the students will be able to influence policy implementation given their current positions within government structures.

The urban planning studio aimed to practically demonstrate participatory slum upgrading possibilities in Kalikiliki informal settlement. The approach was largely bottom up, placing the grassroots community at the centre of the development process in order to come up with a Local Area Plan tailored to the wishes and aspirations of the Kalikiliki community. This report documents the processes and milestones that have been realized through this studio process.

The Zambian federation conducted a mapping and enumeration exercise in Kalikiliki (Lusaka) under the Know Your City project in 2013. A myriad of developmental challenges surfaced from this exercise that are characteristic of most of the un-regularised informal settlements in Lusaka, and Zambia at large. The salient issues were lack of secure tenure, decent housing, improper solid waste management, and WATSAN (water and sanitation) access. As a follow up to the Kalikiliki mapping and enumeration exercise, the masters students sought to build on this repository of information and have an action oriented plan towards improving the appalling living conditions which characterized life in Kalikiliki. 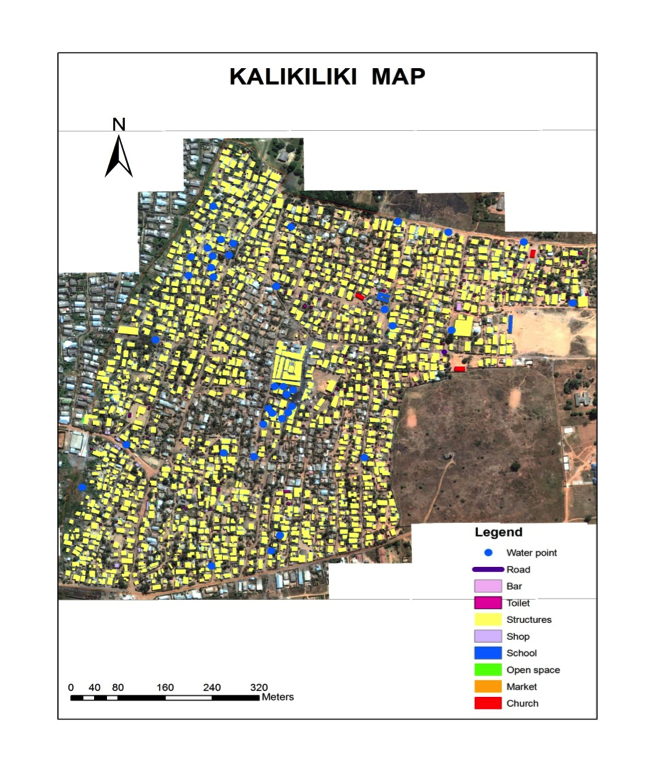 Signing of Memorandum of Understanding

On 10th December 2013, PPHPZ and UNZA signed an M.o.U to formalize their relationship. The M.o.U aimed to improve the Masters of Science in Spatial planning curriculum offered by the University and promote the goal of inclusive Zambian Cities that integrate the interests of informal residents.

The Masters of Science in spatial planning is the first of its kind being offered by the university and The Ministry of Local Government and Housing has sponsored ten officials drawn from local and central government to undertake the programme in an effort to build the capacity of the city planning fraternity. The programme thus provides a great opportunity to transform city planning in Zambia, with a bias towards hands on experience with informal areas and the massive challenges the urban poor face.

The ZHPF (Zambian Homeless Peoples Federation), through the Kalikiliki saving schemes, were from time to time requested to give lectures on participatory slum upgrading to the masters students at UNZA. The lectures were important moments because this was the first time the federation was teaching educated and experienced professionals in a lecture theatre. The focus of the lecture critiques was to bridge the gap between theory and practise in the participatory slum upgrading discourse. This was achieved by drawing from the lived experiences of the Zambian Federation.

One of the most interesting lectures focused on building standards. The Federation posed the question of “whose standards?” In earlier lectures some students had taken a purely theoretical approach arguing that slums should be razed and “decent” housing built for slum dwellers. However, the Federation argued that there is no government that can afford to embark on such a colossal endeavour, and that the most practical option is in situ upgrading. The Federation also made a strong case that whatever legal standards are adopted should conform to realities on the ground.

The ZHPF were largely responsible for mobilizing the residents of Kalikiliki to participate in the upgrading of their settlement. The ward councillor (The Honorable Benjamin Chanda), Lusaka City Council officials, ward development committees, churches, water trusts, market stall holders, senior citizens and other community based organizations (CBOs) all participated.  One of the key strategies employed to disseminate information was announcing activities through various churches. Pastors played a crucial role in encouraging congregations to participate, which resulted in large numbers of people taking part.

5 validation meetings were held with the residents of Kalikiliki who actively participated in the shaping of the local area development plans developed through the studio. These validation meetings helped to reinforce social cohesion in the community as residents came together for the common good. 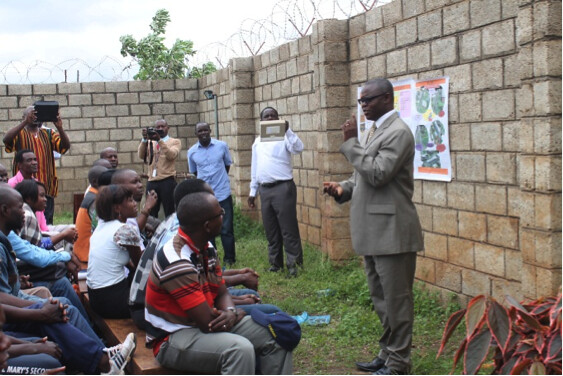 After broad consultations with the community the final local area plan was tabled before the Lusaka City Council for possible adoption on 6th March 2014. Students generously shared their thoughts on and experiences of the Kalikiliki planning studio and its outputs. Most appreciated the principle of community participation, the emphasis on community empowerment, consensus building, and the fact that government was brought closer to the residents of Kalikiliki. Speaking through their class representative, Mr Jamie Mukwato (The Director of City Planning, Livingstone City Council), the students said the following about their experiences in Kalikiliki.

The project in Kalikiliki gave us an opportunity to genuinely engage with informality. We have always considered the issue of informality as peripheral to our daily planning work. The Kalikiliki project thus provided a new lens to examine the relationship between informality and urban planning in Zambia.  The studio gave us an opportunity to examine our planning values and ethics in a country where informality accounts for over 70 percent of the urban population. Generally, planners do not engage with the informal sector in the way we did during this project. Informality is here to stay and as planners we need to look for a way to work with our people in the streets and in informal settlements. During this planning project we developed multiple skills. These included learning how to work with the community to formulate a plan that responds to the massive challenges they face on a daily basis. It was an appropriate learning experience that built the desire to respond to the real challenge of urban poverty. The process sharpened practical skills in dealing with people from different backgrounds.  For upcoming planners the studio offered a great initiation into the world of planning.

There was significant community representation with local leaders and community members expressing satisfaction with the process. Representing the Lusaka City Council, Mr. Chanda, the ward councilor for the area stated that:

“The final plans that have been jointly formulated opened up the space to actualize our dreams for an improved Kalikiliki settlement. Both the settlement-wide and precinct plans have provided me with a course of action to immediately start development activities together with the community, especially around solid waste management. I thank UNZA, PPHPZ and other partners for the initiative in this much-neglected settlement. I pledge my commitment to help take the ideas developed, including the need to have this settlement declared as legal, to the council chambers and the area Member of Parliament.”

Pastor Tembo, on behalf of the community, noted that:

“The project has given the community an opportunity to discuss strategies for improving living conditions. We have been looking for a partner to promote upgrading activities including community-led waste management. We are ready to work with UNZA, PPHPZ and other stakeholders and will support any initiative meant to upgrade our settlement. This is our home and we have been living here for decades, so why continue to regard our home as an “illegal” settlement? On behalf of the Kalikiliki Pastor’s Fellowship Association, the church and the community, I wish to say that the future of the more than 20,000 people depends on initiatives like this one and not on disturbing the way of life for a community who have been here for over 30 years.”

The Lusaka City Council was represented by the Senior Community development Officer, who reflected that:

“It proved to be a challenge for Local Authorities to access houses, especially in the western end of the settlement where houses are haphazardly erected. The proposed plans by students will assist in improving access within Kalikiliki.   These plans will not be wasted and we will consider implementing some of the ideas tabled. Working with the Millennium Challenge Account Zambia (MCAZ) and other partners, we will focus on implementing proposals on waste management, water and sanitation, improving access and eventually achieve full regularization of the settlement. We will also work to ensure that the issuance of occupancy certificates is expedited to cover every resident in Kalikiliki. This will ensure easy administration of ground rents and the overall effective management of the settlement”

“The federation provides a forum for all the residents in the settlement to take charge of their lives by having an opportunity to access finances for both short and long term investments through savings. If you are worried that you will not have finances to improve your house after the upgrading process, come and join our movement. Our “husbands”, (PPHPZ), are always there to help us with the necessary skills needed for our survival and continuous improvement. They make appointments for us to meet senior government and donor officials such as ministers, the mayor, and other important partners. So do not be left behind, come and join us now.”

Key milestones of the studio

The spatial planning studio demonstrated the efficacy of partnering with organized communities in compiling development plans that address vital grassroots challenges. The studio provided the students with practical insights into the experiential knowledge of slum dwellers.  The technical expertise of students, combined with community knowledge, allowed for the development of spatial development frameworks.

The studio methodology was a departure from conventional academic approaches. Kalikiliki slum dwellers lectured students and in so doing reduced the gap between practice and theory. By placing communities at the centre stage of the planning studio an enabling environment for mutual learning and co-production was created. 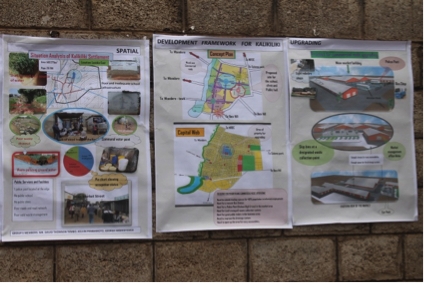 As a result of the solid partnership between the Kalikiliki and The UNZA the community was able to attract the attention of the Millennium Challenge Account (MCA) in Zambia. MCA is one of the largest global development donors and is considering implementing some of the proposed upgrading interventions tabled in the spatial development frameworks for Kalikiliki. This furthers the goal of the studio moving beyond a mere academic exercise.

Furthermore the studio enhanced social cohesion among the Kalikiliki community as they came together to propose development plans for their settlement. This also fostered the relationship between the community and the ward councilor, ward development committee and the local authority. It is understood that the plans will be adopted by the Lusaka City Council and set a precedent for other local authorities in Zambia. Efforts are now underway to ensure the adoption of the plans during the next full council meeting.

Federations Put Data to Use in Lagos, Nigeria ...