"Sanitation and Shelter for Everyone" Says SDI President Jockin 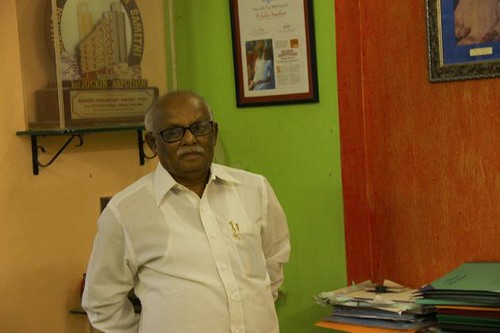 **Cross posted from The Hindu**

Sanitation and shelter are for everyone, says Jockin Arputham, the Mumbai-based activist who has been nominated for this year’s Nobel Peace Prize.

“Jockin, Slum Dweller.” That is how, Jockin Arputham, from Dharavi, Mumbai, nominated for the Nobel Peace Prize this year, introduces himself in any public forum. All his life Jockin has been fighting for dignity, for the ‘weakest of the poorest person’. Except that when he chanced into his line of work, in 1969, he had ‘no theory, philosophy, nor a political compulsion.’

Like the great majority that lives in Dharavi, Arputham is a migrant, who came to Mumbai looking for work. But the city appalled the young man. “It was a culture shock,” he says. He had come expecting a rich city. Instead, it had the worst slums.

He lived in one such slum, Janata Colony. In the first few difficult days, when he felt he had ‘fallen into the pit’, he contemplated taking his own life. So he climbed up a nearby hill, and stayed there for three days, but then he decided he wouldn’t die. Nor go back.

The next morning, he put his carpentry skills to good use, made some money and, in a few days, began sub-contracting work at the nearby Bhabha Atomic Research Centre (BARC). He learnt to give orders in Hindi; and soon the 21-year-old settled down in his new life in Mumbai.

Arputham, now 68, knows what he wants. He wants shelter, sanitation and water for every slum-dweller in Mumbai, in India, in the world. He wants every pavement-dweller relocated. He wants to see change — redevelopment — happening with people’s participation.

It was mosquitoes that made him aware of his potential as a change-maker. Arputham was conducting a coaching class for slum kids when he found the kids unable to focus because they were being bitten. The problem was mounting piles of garbage. To show the municipality the magnitude of the problem, Jockin made the kids carry a newspaper parcel of rubbish and dump it outside the municipal office in Chembur. When the police came to arrest him, Arputham said he would repeat his act until the garbage was cleared. The municipality was shamed into doing its work, for the first time in 22 years in that settlement.

Having tasted the power of protest, he decided to do more. He cleaned the filthy community toilet, again with children’s help. “By that evening, it was a beautiful new toilet!” After that, he was summarily adopted by the people who sought him to sort out civic issues. He learnt English, became an activist, a ‘self-built leader’, led huge demonstrations against the proposed eviction of Janata Colony. In 1974, when he got married, he finally rented a small house.

Arputham still lives in a rented house. He has no property, no assets. His immediate family is small — he has two grandchildren, one from each of his daughters. But his extended family is very large — the urban poor from 33 countries in Africa, Asia and Latin America. They are all members of Slum/Shack Dwellers International (SDI), an organisation founded in 1999, to provide alternatives to eviction. SDI’s headquarters is in Cape Town, South Africa, and Arputham is its president.

But the path to fame was not smooth. In the 1970s, there were many attempts to arrest him. Each time, people, especially thousands of women from the slum, surrounded him and hid him.

When Emergency was declared in India in 1975, Arputham found that he would be put away; so he fled to the Philippines and stayed there until the new government was elected. But he carried on with his work. He set up the Bombay Slum Dwellers Federation in 1975. Slowly, the movement grew and became the National Slum Dwellers Federation (NSDF). “The organisation is a very huge one,” he says. “I work in around 70 cities in India.”

While Arputham never wavered in his ideals, his approach changed over the years. In the early 1980s, he swapped the ‘shirt of militancy’ for one of negotiation. He moved from Janata Colony — the slum made way for BARC — to Dharavi.

Dharavi alone has 89 slum pockets, he says, sitting in his office. The walls are painted in jewel colours. But the real jewels in the room are Jockin’s awards — the Ramon Magsaysay in 2000; Padma Shri in 2011; and an honorary Ph.D. from KIIT University, Bhubaneswar, in 2009.

As the founder, and now reluctant president of NSDF (he wishes to resign, but nobody will hear of it), he’s especially keen to include women in the organisation’s activities. “I’m running this organisation because of the strength of the women. In India itself, more than 10-12 lakh women are members. Men are good bullies; they tend to take the credit, even if women run the show.”

In the slums where NSDF functions, migrations from rural to urban India are touching new highs, and sleepy little towns are today being transformed into bustling shanty towns.

‘Achche din’ has to reach out to these people too, argues Arputham. “Show me one budget that is talking about the other citizen of the city. You look at the city corporation agenda, which I look at every week. Three per cent of the agenda is connected with the slum-dwellers whereas their population is 60 per cent. The rest of the city hogs the whole agenda.”

“I’m known world over as ‘Toilet Man’. In South Africa, where it’s a stigma to say toilet, I made them talk about it. In the United Nations, I built a demonstration toilet in the UN plaza.” And demonstrated to Kofi Annan how Indians squat! He has built more than 20,000 (toilet) seats in Mumbai alone.

It was from Dharavi that Arputham drew plans for inclusive growth. He insisted on new standards on redeveloped housing, an increased floor-space-index. Over the years, Arputham has built 30,000 houses in India, and 1,00,000 houses abroad. Funding for his work comes from many sources. Thanks to his work, he has met both Bill Clinton and Nelson Mandela.

The winner of the Nobel Peace Prize 2014 will be announced on October 10.