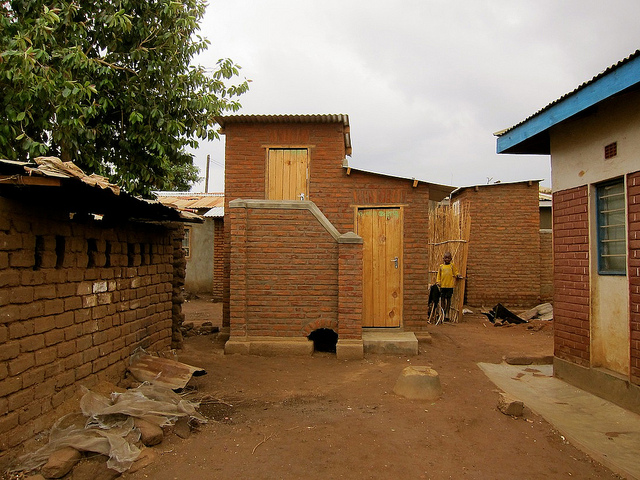 By Mariana Gallo and the Malawi Homeless People’s Federation

The sanitation challenges that Blantyre currently faces are complex with limited affordable options for informal residents to choose from. No sewerage treatment or disposal services, poor access to water, and a lack of space all characterise the cities’ slums.

The Centre for Community Organisation and Development (CCODE) and the Malawian Federation have been supporting informal communities to access Ecological Sanitation (dry composting) toilets since 2005 with approximately 800 toilets serving 14,400 people having been built to date. EcoSan toilets started out as part of the housing process pursued by Federation savings groups but, over time, their provision has become a stand-alone investment in settlement upgrading.  Once the first “precedent” toilets were constructed, the benefits were realised by many and demand among the Federation grew. Currently, sanitation is a key aspect of the Blantyre Alliance’s settlement upgrading efforts. Community-led data collection shows the gaps that exist between the number of residents and the number of toilets in a settlement. Profiles indicate that in many of Blantyre’s slum settlements toilets are shared by up to 10 families (approximately 60 people), stressing the urgency for affordable and practical solutions.

The demand for EcoSan sanitation has grown over the years due to a number of advantages in comparison to more traditional approaches to sanitation (e.g. simple or improved pit latrines):

Including all community members

At first, toilet loans and technical support were only offered to Federation members – accessed and managed through savings schemes. After a number of years, and subsequent to internal discussions, EcoSan sanitation loans were made available to non-Federation members. This change was motivated by an increased interest in the technology by the wider community and recognition that scaling up must imply working beyond the Federation as the whole community, and not just Federation members, face sanitation challenges. An example of one such challenge was the cholera outbreak of January 2015 that affected entire communities. The toilets built to date have been spread across low-income areas in Blantyre with greater uptake in areas with rocky ground where traditional latrines have been difficult and expensive to build. Using data from enumeration reports, the density of EcoSan provision ranges from between 2 in 10 households in some areas to 6 in 10 households in others.

The process of including non-Federation members required a focus on the mobilisation of entire communities. In Blantyre, EcoSan toilet provision has taken a central place in slum upgrading strategies. The slum upgrading work is undertaken in close collaboration with traditional leaders, who play an important role in vouching for individuals to receive sanitation loans, managing various meetings and overseeing any issues that arise around repayment.  Drawing traditional leaders into the process has proved effective especially when working with non-Federation members and loan repayments rates have improved.  Repayment rates have varied between 45% and 87% over time and are often affected by variables such as whether it is a lean period or harvest time. As noted, institutional shifts in the methods deployed by the Federation have also affected repayments (e.g. a 5% commission for loan collectors has recently been introduced. But before this can be implemented more widely, more questions on costs need to be answered). The highest effectiveness was demonstrated when Federation teams worked closely with technical projects teams. However, over time this approach has not been sustained and repayments have dropped.

The current cost of a complete EcoSan toilet (toilet and bathroom) is 150,000 MK (around 272 USD). Families are required to make an initial payment of 10% (15.000MK) and the rest over one year period (with interest). These costs can be unaffordable for many of the poorest residents of informal settlements in Blantyre. In addition, the burden has been on landlords to invest in the toilet, with tenants having to push for the service. In the cases when landlords have invested, in general, rents have not increased as in Malawi it is the landlord’s responsibility to provide a toilet for tenants – a cost incurred whether the investment is EcoSan or a traditional pit latrine.

Some advantages in terms of costs of the EcoSan toilets are:

Understanding that despite the above benefits long-term investments can be prohibitive for the poor, several measures have been put in place to make the toilets affordable. These include:

Whilst a lot has been achieved so far, the scale of the problem in Blantyre is huge and further efforts are needed to address improved sanitation for the poor. The construction of household EcoSan toilets is an ongoing process, with a revolving fund financing mechanism that covers the loans provided throughout time, and a demand that continues to grow. Six EcoSan public toilets have been constructed in market places in informal settlements, which look to release the pressure of the lack of sanitation facilities in those areas, and serve about 1,500 people that work and visit each market daily. These toilets are community-managed through a local committee and the small fee paid by customers (of 30mk or 0.05 USD, representing 3.6% of monthly income of someone on minimal wage) aims to ensure their maintenance and sustainability over time. Furthermore, a city-wide sanitation committee has been set up to oversee the functioning of all the public toilets and all local committees (to ensure appropriate management of the facilities). Furthermore, the city-wide committee is expected to engage in other initiatives related to city-wide sanitation in the near future. CCODE, the Federation, the City Council and traditional leaders are represented in the committee, ensuring close partnerships for better sanitation in the city.

Some of the issues delaying the progress in the provision of adequate sanitation are the lack of trained builders in this technology, which depends on the demand – which can be high with as many as 20 toilets on the waiting list. Constructing a toilet takes 1 week, and sometimes families have to wait up to 2 weeks to have their toilet built. Training is on-going to ensure there is a workforce available to address the existing demand. Funds required to finance the toilets as well as to fund further trainings and supervision could also boots the efforts and multiply impact, and these have been secured in the past through organisations such as the African Development Bank (ADB).

The provision of EcoSan is implemented as a joint venture with Blantyre City Council (BCC), deepening the relationship between the BCC and CCODE/Federation. The City Council provided support in terms of programme design, and in some cases it also provided land for public toilets. This has helped scaling up of the efforts in the southern region of the country, and set precedents that are now being implemented in other regions, as an essential component of a number of donor-funded projects. Furthermore, EcoSan toilets have been included in the national sanitation catalogue as an improved sanitation technology, an achievement that will enhance its replication.