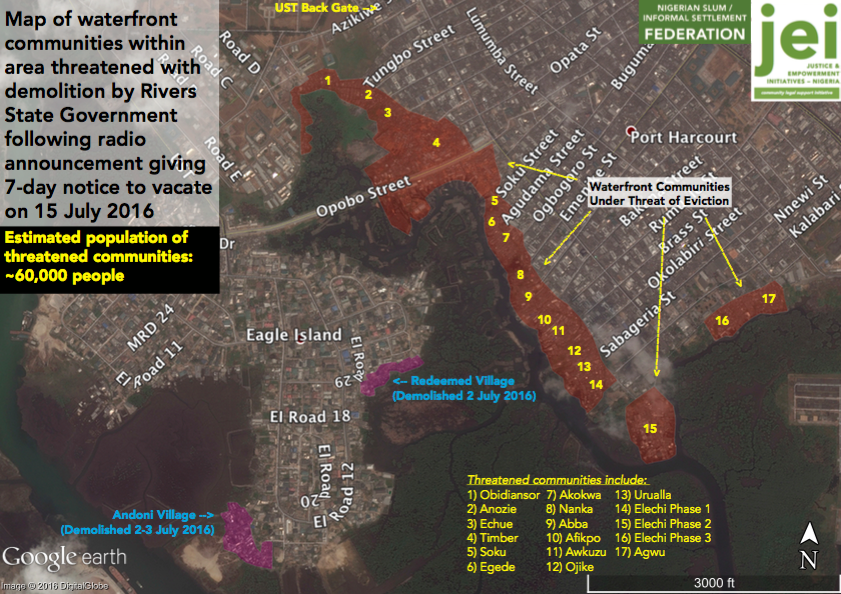 On Friday July 15th, 2016 the Rivers State government made a radio announcement notifying citizens of 17 waterfront slums in Port Harcourt, Nigeria of a 7-day “notice to vacate,” saying that anyone who remains will be deemed a criminal and arrested.

From the Nigerian Federation’s profiling data, we estimate as many as 60,000 people stand to be evicted.

A mass protest (reportedly some 4,000 inhabitants) took to the streets in Port Harcourt on the morning of Tuesday, July 19 and were met with rubber bullets and tear gas. A small group, including the SDI-affiliated Federation, is reportedly meeting with the Governor now. A bus full of Federation members traveled from Lagos to join in action and show solidarity.

The Nigerian Affliate is approaching the court with a motion for injunction, but previous experience demonstrates little faith that the legal route will do more than buy some time, if that. The Governor has called all of the waterfronts “dens of kidnappers” in order to come under a provision of a new Anti-Kidnapping Law that allows for demolition of kidnapper’s homes.

The Nigerian Federation has mobilized a coalition of Port Harcourt NGOs that will all come out in solidarity, and are drawing on their media contacts as well.

The Protest, The Representatives and The Peti ...