SDI demands no forced evictions and no relocations without negotiated alternatives! But what happens when anti-poor governments refuse to negotiate? This continues to be the case in Nigeria. When this happens SDI affiliates are compelled to take to the streets and the courts. While that plays itself out, often with tragic consequences, SDI calls on the international community to help us talk sense to power. As these poignant stories from Lagos demonstrate evictions and armed force cause irreparable damage to the lives of poor people. Eventually it does the same to the cities in which they happen and to the Governments that cause them and sanction them with silence and with violence.
—
On the date of a protest by Otodo Gbame evictees, the Nigeria Slum / Informal Settlement Federation issued a press release, marking one year since the violent and unconstitutional evictions in their community began.
On Wednesday 15 November 2017, more than 600 evictees and other members of the Nigerian Slum / Informal Settlement Federation gathered at Ojota and marched to the office of the Lagos State Governor to demand justice in line with the Government’s own promises and the orders of the Lagos State High Court that evictees should be resettled.
After some time, a delegation from the Lagos State Government led by the Commissioner of Home Affairs and the Commissioner of Special Duties came out to address them. These two commissioners are part of an ad hoc committee set up in April 2017 that had met with evictees and promised relief and shelter. Since evictees submitted a list of persons affected, however, there has been no response whatsoever from the Government to several follow-up communications.
As such, when the commissioners again asked evictees to “exercise patience” today, evictees decided to stand their ground and wait at the Lagos State Government’s office until the Governor deems fit to address them and ensure his Government will make good on their promises. We are informed that the peaceful protesters are prepared to sleep outside the Governor’s office as they wait.
The day has been marked by heavy police presence and use of violence and tear gas against peaceful protesters, including the elderly, women, and children.
Justice & Empowerment Initiatives – Nigeria (JEI) stands in solidarity with evictees from Otodo Gbame and with the Nigerian Slum / Informal Settlement Federation as they press their demands for justice and an end to forced evictions.
Below are a few photos, and a timeline that explains the forced eviction in Otodo Gbame and efforts to achieve justice up to date. More photos and updates will be forthcoming as the story evolves.
Thank you for your solidarity and coverage of these important events. 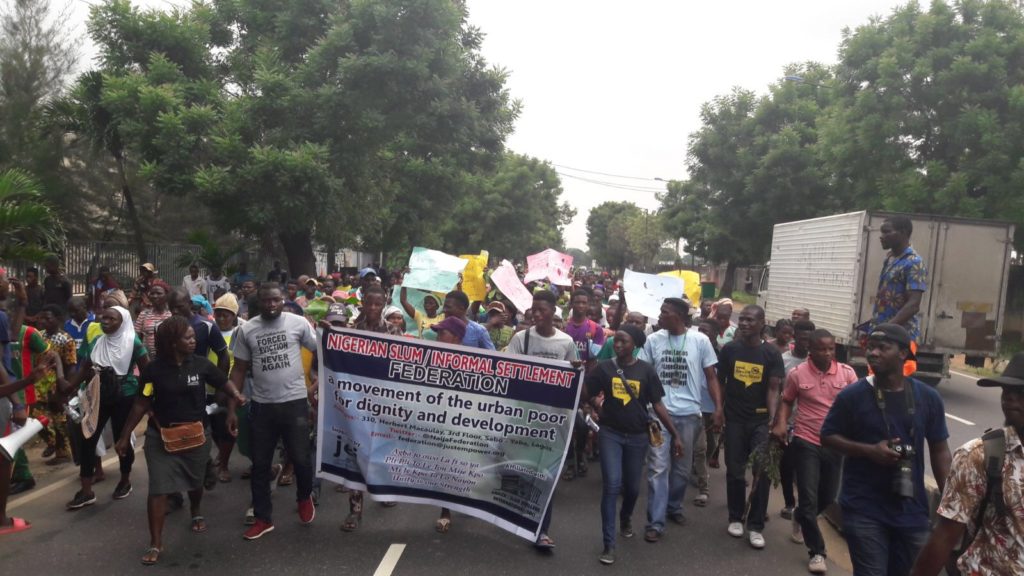 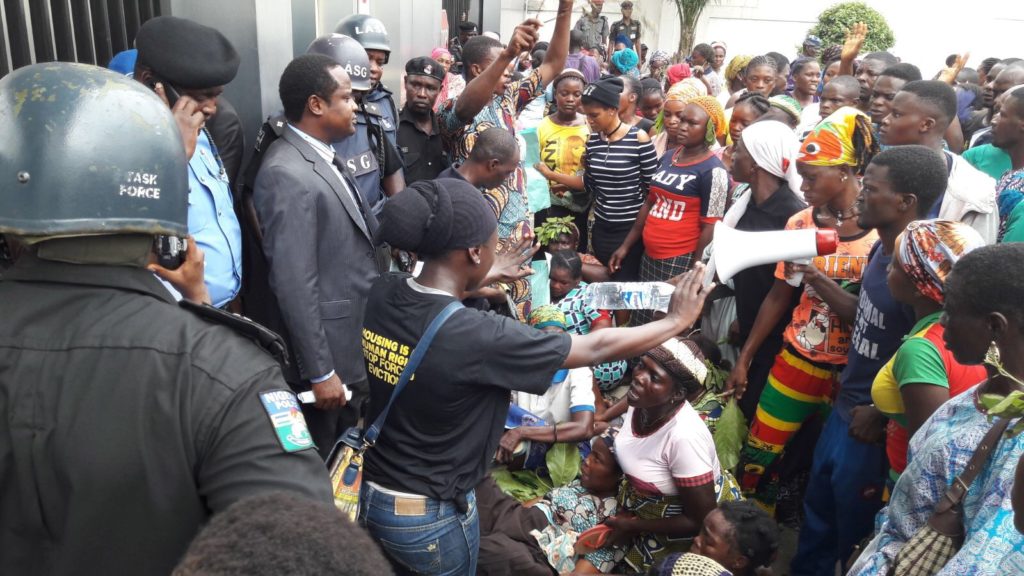 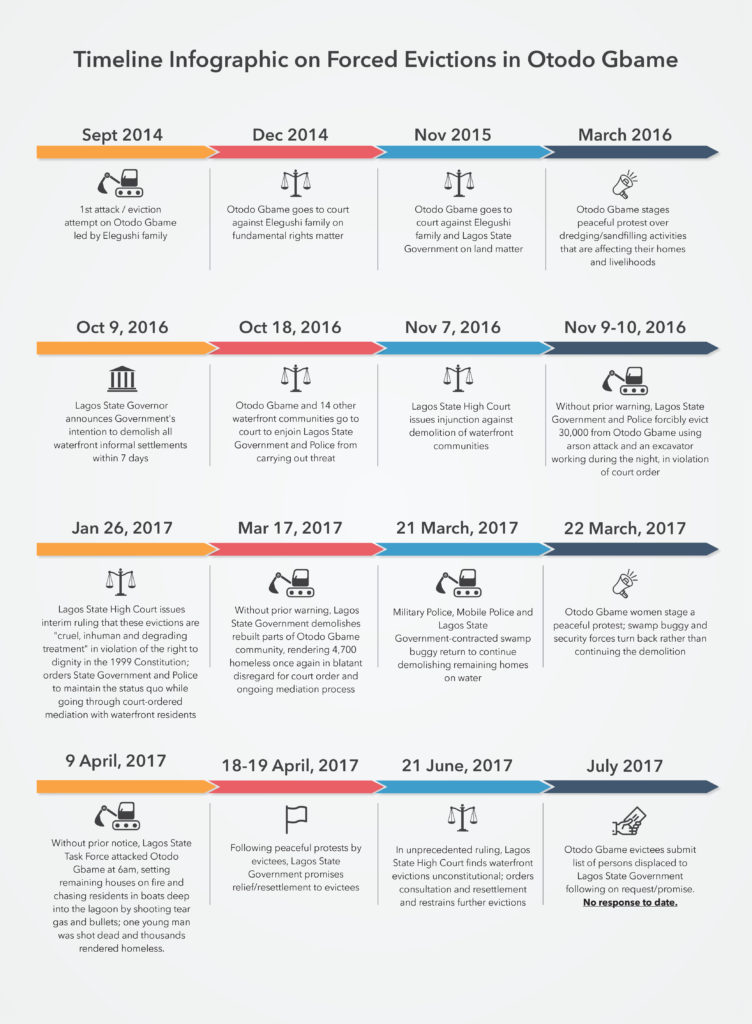 UPDATE:
The SDI Secretariat received the below update from our Nigerian affiliate at 3:25am on Thursday 16 November 2017.
Our apologies for the late message. This is to update all media, foreign missions, and other civil society partners on some deeply concerning updates from the peaceful protest by Otodo Gbame evictees and the Nigerian Slum / Informal Settlement Federation.
Nearly five hundred peaceful protesters remained on the protest ground outside the office of the Lagos State Governor as night fell. They sang and danced, they prayed collectively, and they settled in to spend the night in hopes the Governor would address them in the morning. Attached are some pictures taken by photographer Omoregie Osakpolor of the evening hours of the protest. Please be sure to attribute if making use of them.
Just after midnight, the Lagos State Task Force (a specialized police force) stormed the protest ground and began beating the peaceful demonstrators. They brought three “Black Maria” mobile detention vehicles and arrested many of the protesters, especially men. We have reports from inside that one vehicle was packed with 46 demonstrators. We believe the others contain similar numbers. They were taken first to the Task Force office at Oshodi in Lagos and then to the State Criminal Investigations Division of the police at Panti, Yaba in Lagos, where they are now. Those arrested include a number of leaders of the Nigerian Slum / Informal Settlement Federation and JEI community paralegals.
The remaining protesters, mainly women and children, were chased away from the Governor’s office and had to hide themselves along the roads in the surrounding area. We are tracing groups who are in different locations trying to hide and remain safe. We understand they are trying to regroup so as to return to the protest ground in the morning, a sign of their incredible resilience and courage.
Justice & Empowerment Initiatives (JEI) condemns in the strongest possible terms the use of force and unlawful arrest of peaceful protesters who have come out to demand justice and an end to forced evictions that plague the urban poor. We will be with the evictees of Otodo Gbame and all those arrested as they seek their liberty and continue their struggle to its logical conclusion.
All supportive actions will be welcomed. The evictees of Otodo Gbame need your support and coverage now more than ever. 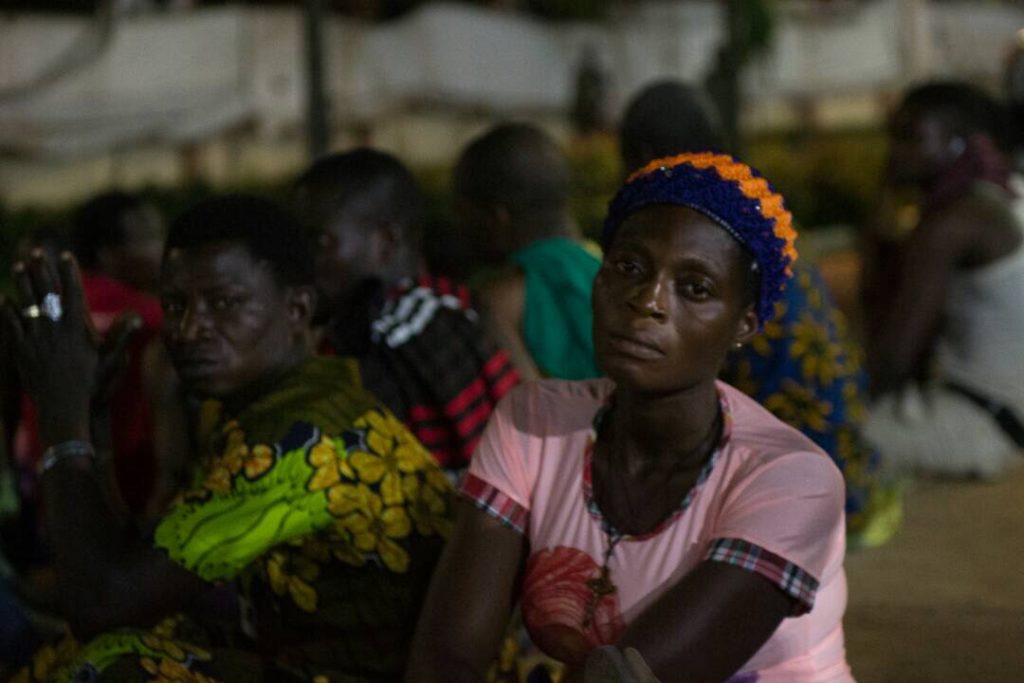 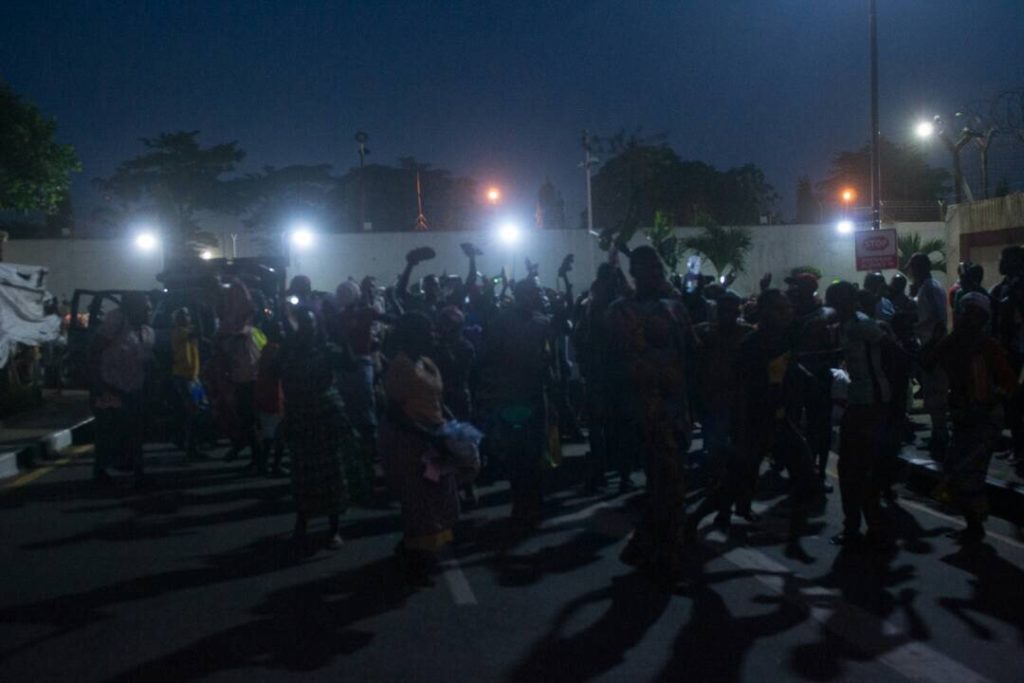 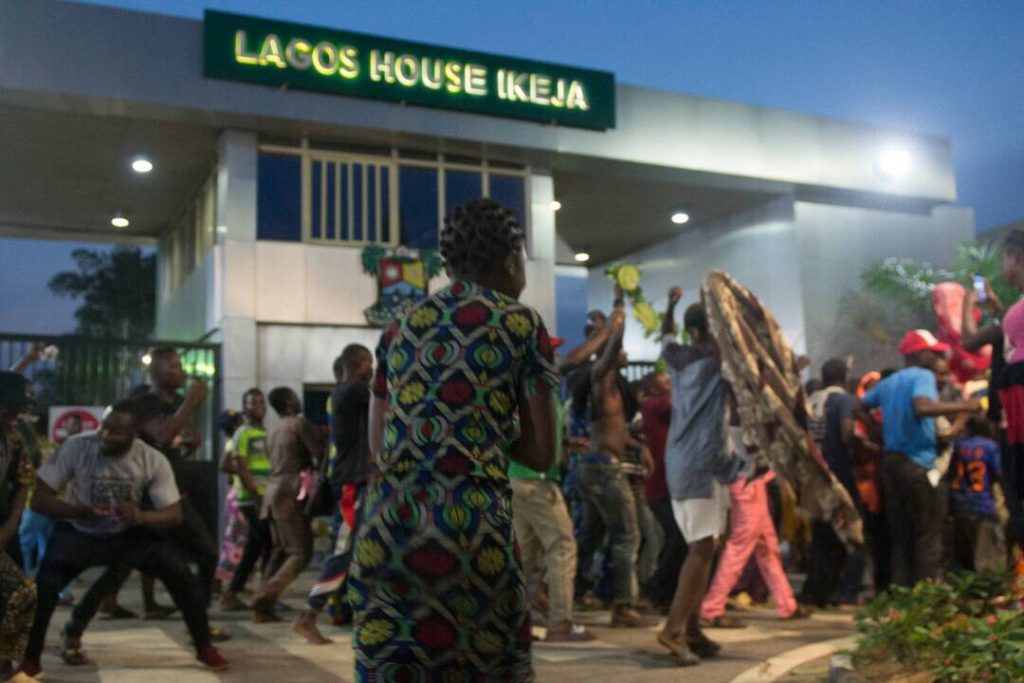 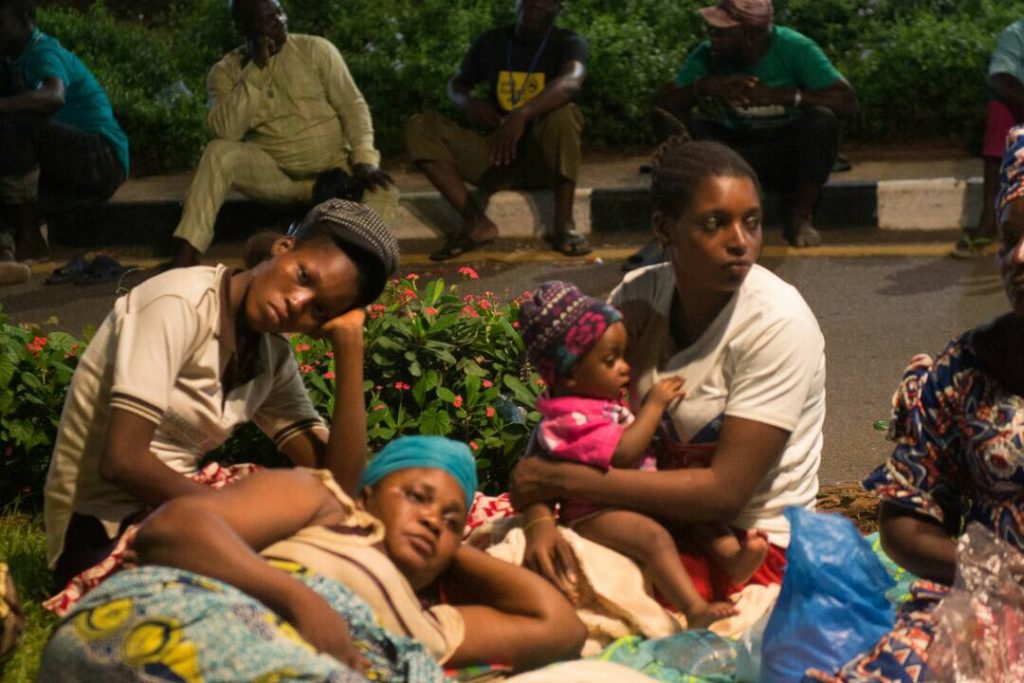 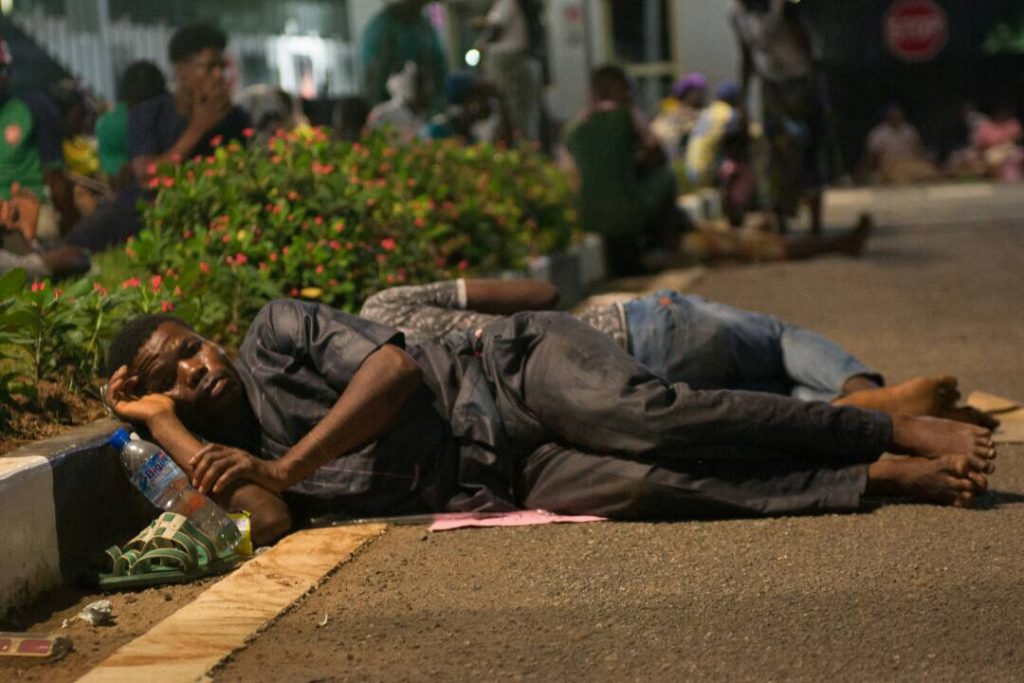