Winners of the 2019 Community Led Habitat Award for Africa 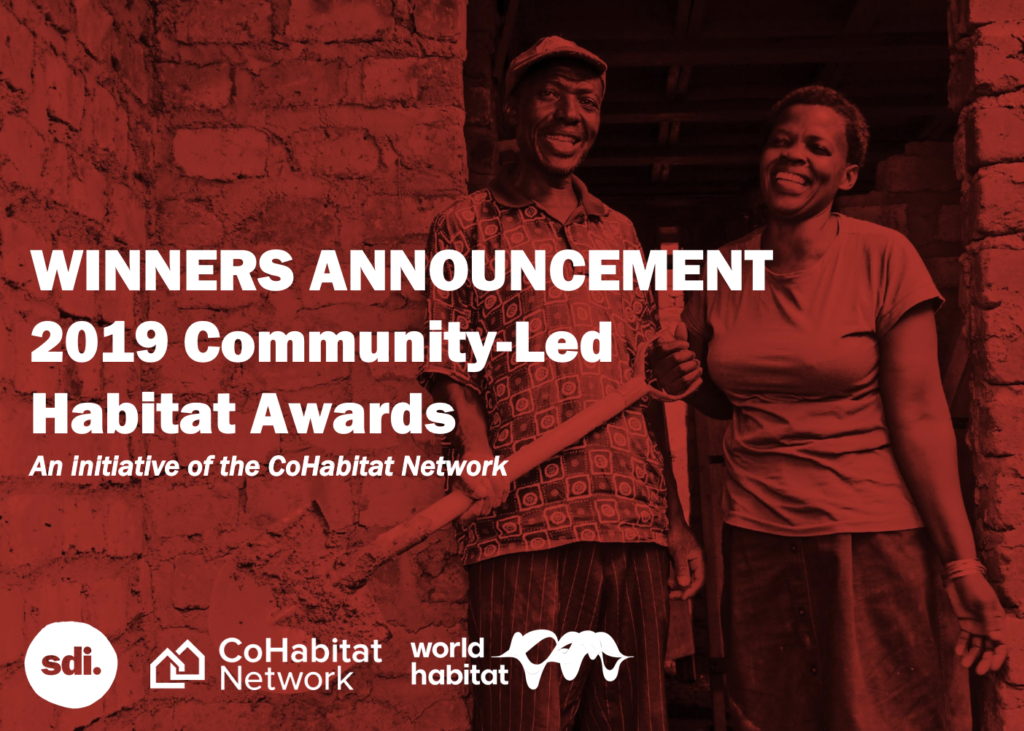 SDI is excited to announce the winners of the 2019 Community-Led Habitat Awards: Project Call for Africa, an initiative of the CoHabitat Network implemented in partnership with urbaMonde and World Habitat. The aim of the call was to highlight innovations produced in relation to community-led habitat and the built environment. The winning teams will be awarded USD 1000 for continued learning to leverage visibility of the project and will present their project or partnership at the inaugural Habitat Assembly in Nairobi later this month.

The call was open to all resident-led or grassroots organizations, with three award categories available:

The following have been selected as winners in the Best Project category: 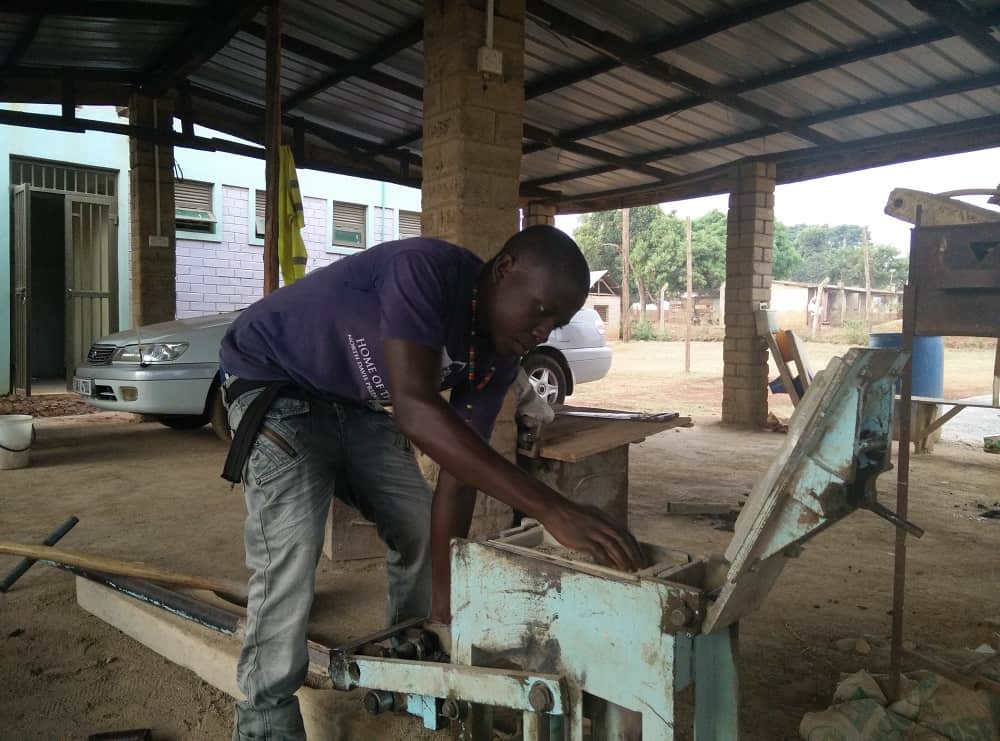 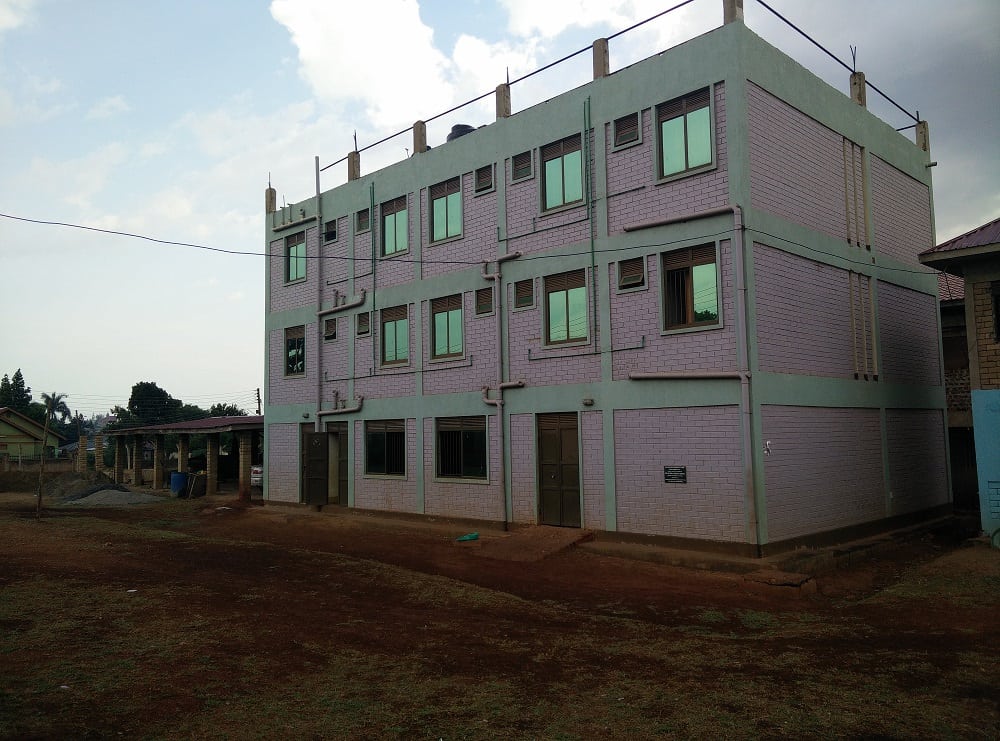 Walukuba Material Building Training Center (Uganda). The Jinja Material Training Center is a social enterprise and a resource center for Incremental Upgrading in Jinja. The project was established by National Slum Dwellers Federation of Uganda (NSDFU), ACTogether and SDI. It is comprised of a materials workshop used for the production of innovative low cost building materials and training, a community hall for the Walukuba Community, a hostel for trainees and Federation visitors, and a selection of demonstration projects such as sanitation units and a demo house. The three-story hostel and community hall were constructed entirely from products produced on site. Project impact includes: Skills-training on production and improvement of low-cost housing materials; income-generation through the hostel; and community-building, both through project planning and implementation and thanks to the provision of a community hall as part of the project itself. 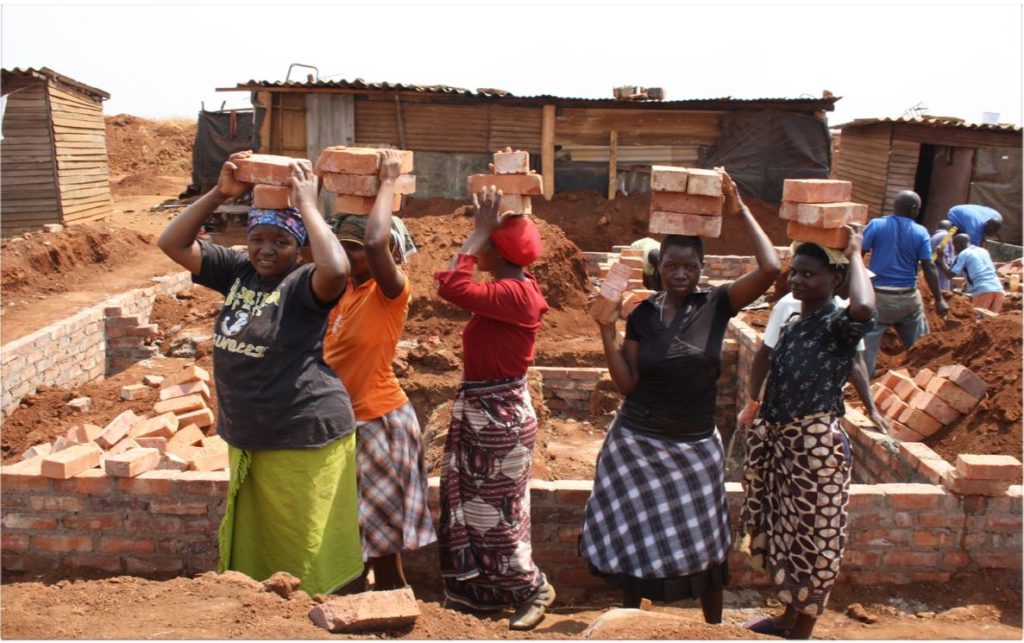 Dzivarasekwa Slum Upgrading Project (Zimbabwe). The Dzivarasekwa Slum Upgrading Project is a housing project based in the community of Dzivarasekwa extension. This projects forms part of the greater Harare Slum Upgrading Project which is being implemented by the alliance of the Zimbabwe Homeless People’s Federation and Dialogue on Shelter for the Homeless Trust, in partnership with the City of Harare and the Zimbabwe central government. Construction began in 2011 and is still ongoing with 480 families as primary beneficiaries of land for housing development, leading to secure tenure and provision of adequate water and sanitation facilities among other essential services. 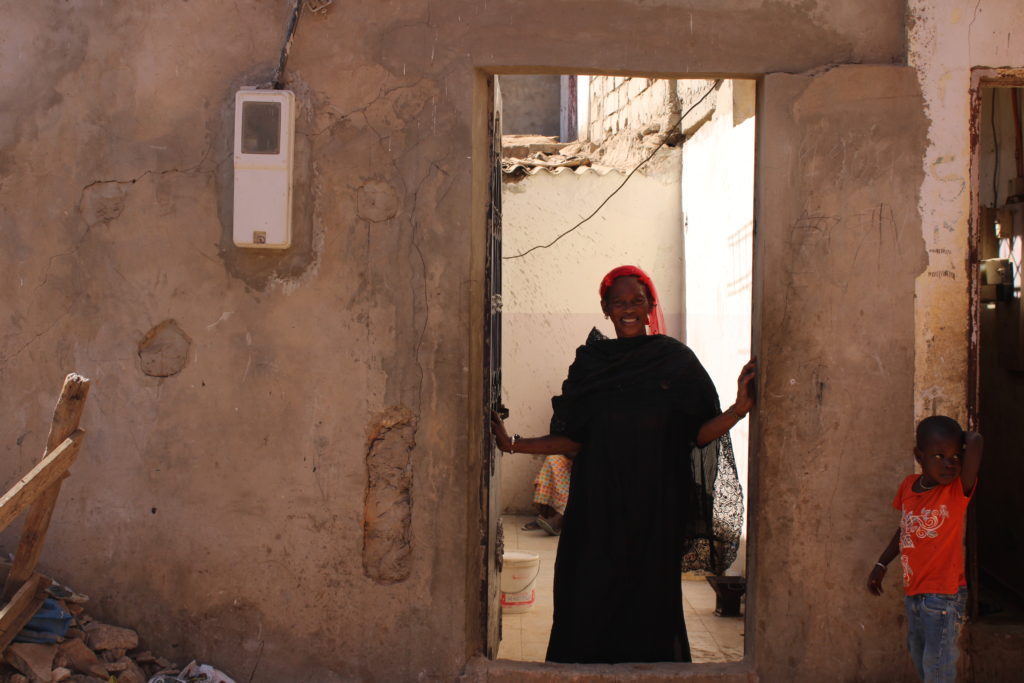 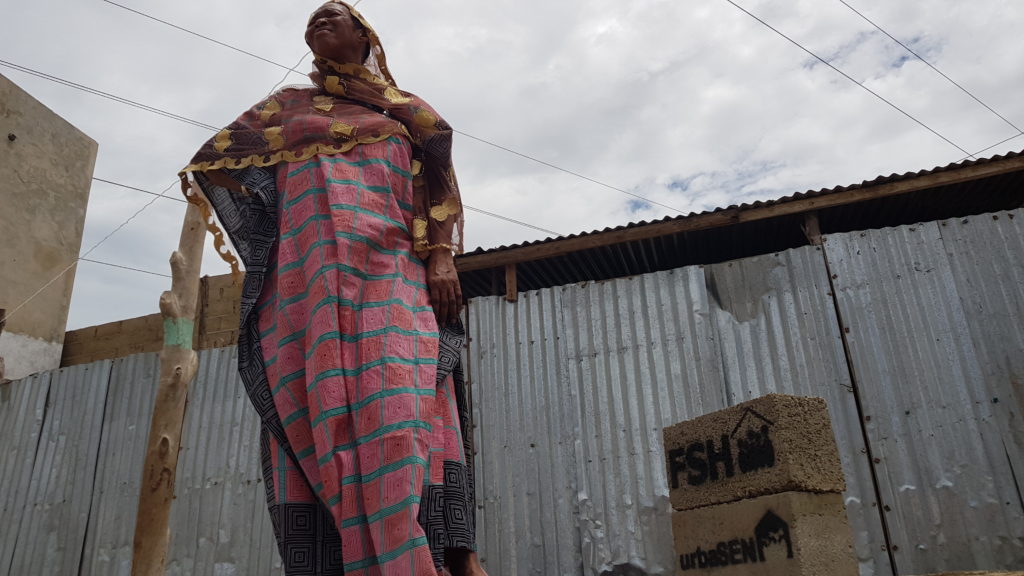 Home Improvement/Upgrading Project in Flood-prone areas // Appui á la reconstruction de l’Habitat en zone sinistrée (Senegal). A home improvement and reconstruction programme stewarded through the federation’s revolving fund,  benefitting to date more than 300 households affected by floods. The programme provides an opportunity for low-income communities in the suburbs of Dakar to improve and rebuild their homes through an affordable financing mechanism and with technical support. The programme is currently being expanded to include community-wide infrastructure and sanitation projects. To date, 313 home improvements have been completed, in addition to 80 micro-projects. Another 300+ home improvements are in the planning phase. 5000 savings group members have been mobilised, and 100 local craftsmen trained in construction skills.

The winner in the Best Partnership category is Namibia for “A Multiple Partnership Approach for Community-led Housing and Services in Namibia.” Partners include: Shack Dwellers Federation of Namibia, Namibia Housing Action Group, Namibia University of Science and Technology (NUST), Local, Regional and National Government of Namibia, and private sector. 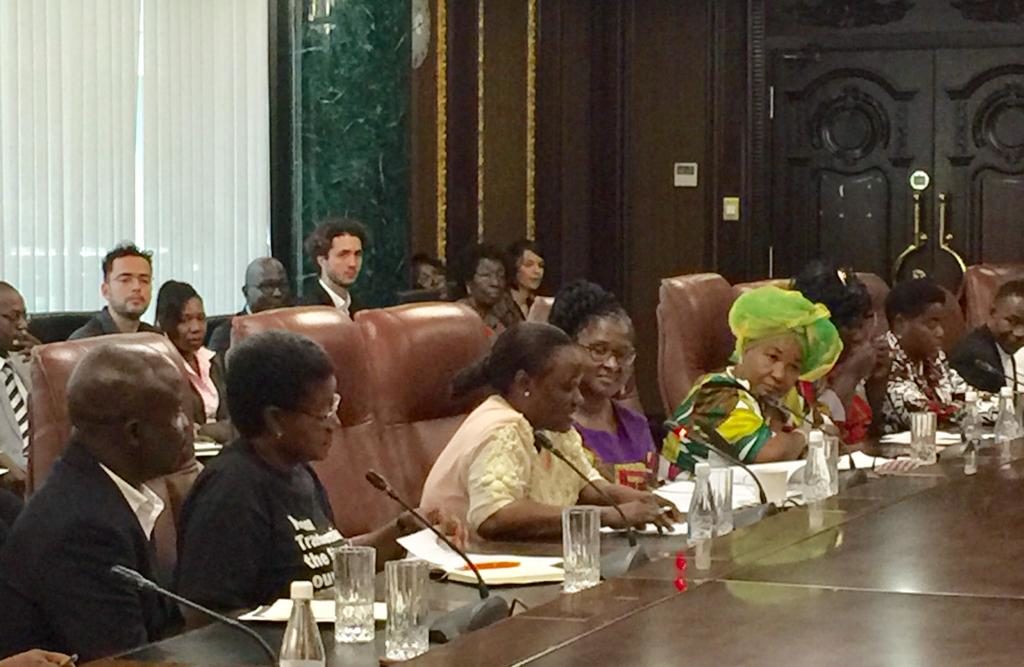 The Shack Dwellers Federation of Namibia (SDFN) has, over a number of years, formed an active partnership with the Namibian government in order to work together towards pro-poor, participatory housing and urban upgrading policies – including financing, land tenure and participatory planning and upgrading aspects. Today, SDFN is negotiating conditions and the framing of the policies. It manages the urban poor fund and negotiates partnerships with third actors. In addition, SDFN is working to forge new partnerships with the private sector Standard Bank who started the a Buy-a-Brick public fundraising campaign, as well as a partnership with Ohorongo Cement Factory, First National Bank and Pupkewitz Foundation with donations of N$3 million a year. They have contributed N$ 10 million since 2016.

The impact of this partnership has been far-reaching, and has included the development of a pro-poor housing development program resulting in the construction of houses throughout all the regions of Namibia and an Informal Settlement Upgrading in Gobabis for more than 1,000 households. In addition,  a Memorandum of Understanding exists between SDFN and Namibian government for the collection of settlement data to be undertaken by the federation, and the peoples’ housing process is included in the National Housing Policy as updated in 2009. Building on the experiences of community, the Flexible Land Tenure Act of 2012 was approved to cater to the community to register their blocks of land. The Namibia government has, since the year 2000, assisted 2,284 households to obtain housing through donations of N$ 59.6 million which forms 35% of the N$ 165.3 million channeled through Twahangana Fund – the Namibian urban poor fund – to more than 10,000 households to build houses, install services and improve incomes. The community contributed 37% to the fund through repayment (N$58.9 million) and their own contributions (N$2,2 million).

There was a very close call in the Best Short Film category, where the Nigeria and Kenya KYC.TV teams tied as winners of the Audience Award, with each team mobilising over a thousand votes. The award for overall Best Film was given to Nigeria, for their film “Undevelopment: Forced Evictions in Nigeria,” with a special mention to Uganda for their submission.

“Undevelopment” focuses on the impact of forced eviction, defined by the United Nations as “the permanent or temporary removal against their will of individuals, families and/or communities from the homes and/or land which they occupy, without the provision of, and access to, appropriate forms of legal or other protection.” The Nigeria federation has compiled data on 114 forced evictions in Nigeria since 1973. This video seeks to bring the scourge of forced evictions to the forefront of the Nigerian social and political conscience. It weaves together the stories of eight evictees as they describe life before, during, and after eviction, and makes an appeal for more inclusive urban development. The video draws on footage collected over several years and countless contributions of many individuals from Justice Empowerment Initiatives and the Nigerian federation. Elijah Atinkpo, who lost his home in the forced eviction Otodo Gbame eviction of 2017, led the visioning and post-production processes.

We are inspired and encouraged by the response to this year’s Community Led Habitat Awards and look forward to watching as winners continue to spread the learning from their projects to still more communities. Stay tuned for news of the 2020 CLH Awards. We are excited to continue on with this initiative.