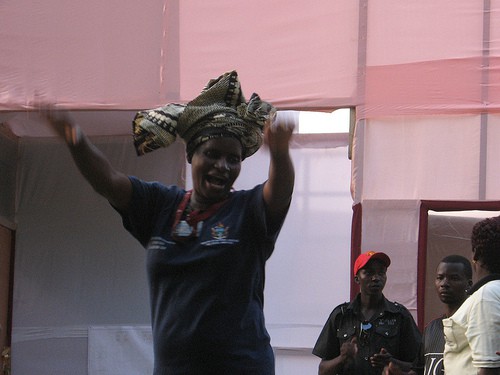 The Zimbabwean Homeless People’s Federation put on a real show at October’s National Housing Convention in Victoria Falls with an eye-catching double-storey housing model, and song and dance inside the conference room. But big news was happening behind the scenes.

During last month’s SDI Council meeting, I caught up with Patience Mudimu, a project coordinator at Dialogue on Shelter, an NGO supporting the activities of the ZHPF. She told me that the Federation and Dialogue held a number of meetings with local government authorities during the convention. “For possibly the first time, we were getting directors to queue up to have appointments with us,” she said.

There have been follow-up engagements with authorities from five different cities — Harare, Masvingo, Chiredzi, Mutare, and Bindura. The plans under discussion in all of these places reveal a lot of the challenges and possibilities of local administration and urban housing in Zimbabwe.

In Harare, Dialogue on Shelter is talking with Mayor Muchadeyi Masunda about a partnership between the ZHPF and local government to renovate hostels in four settlements. Though town planners are often responsible for much of the implementation process of policy, mayoral will is key, Mudimu told me, to give political clout to a project like this.

In Masvingo, the Federation is facilitating exchanges of local ministers between different cities. As part of the exchange program that they agreed to at the housing convention in October, Mayor Femias Chakabuda wants to bring Federation members in Masvingo to visit the Federation-built settlement in Victoria Falls. According to Mudimu, Chakabuda was particularly impressed by his visit to the settlement.

The Chiredzi local authorities invited Dialogue on Shelter and the Federation to give a presentation to the full town council. They gave this presentation in early November about the difficulties that homeless people have in obtaining land.

The authorities in Mutare had given land to the Federation to build boreholes, a project being funded by SDI’s Urban Poor Fund International (UPFI). As part of the negotiations at the housing convention, the Mutare authorities gave a verbal go-ahead, but there is still no written agreement on the issue.

Finally, Bindura authorities have offered space to the Federation to build a community resource center.

As Mudimu noted to me, while it can be tough to achieve much publicly at these big housing conventions, the public show can serve as a good backdrop for successful negotiations and partnerships behind-the-scenes.

In Situ Upgrading and Accessible Cities

Accessible and inclusive cities demand systems and policies that provide the poor with equal access to the social, economic, and service benefits of the formal city. Relocation to the periphery...