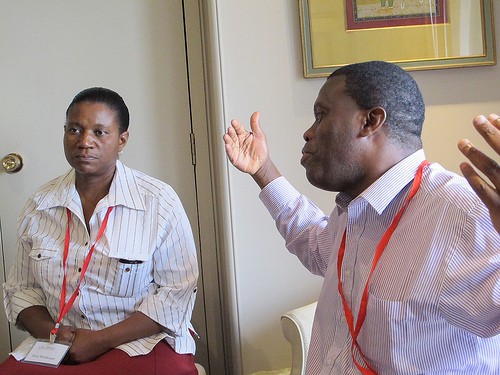 This week, SDI delegates are traveling through Uganda with members of the Cities Alliance secretariat to meet with Uganda Slum Dwellers Federation-organized communities, ACTogether, an NGO supporting the activities of the USDF, and officials from all levels of government. This is part of a project facilitated through the new Cities Alliance “Land, Services, and Citizenship” program that is focusing on five secondary cities in Uganda (Jinja, Mbale, Arua, Mbarare, and Kabale).

During the Cities Alliance consultative group meeting last week, SDI and ACTogether delegates met with the Ugandan minister of housing, land and urban development Michael Werikhe and his commissioner, Samuel Mabala. The key goal of these engagements, at all levels, is to ensure that organized communities of the urban poor are put at the center of the processes of development in Uganda.

Updates on this greater process of organizing communities through SDI’s tools such as savings, community-driven information gathering, and community-based urban poor funds, will be forthcoming as events progress on the ground in Uganda. As one of the poorest countries in Africa, with a low rate of urbanization (about 15%), this is an exciting opportunity to put organized communities at the center of urban development in its relatively early stages.

UPFI board meets in Stockholm