UPFI board meets in Stockholm 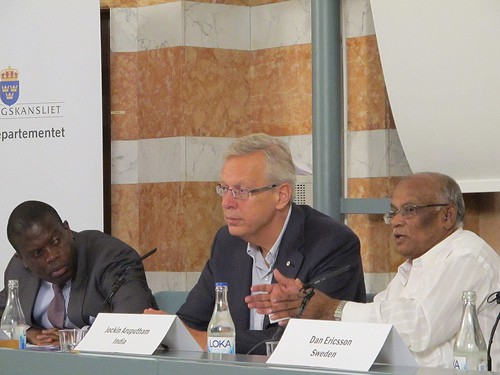 The Board of Governors for SDI’s Urban Poor Fund International (UPFI) held its second and last meeting of the year last week in Stockholm, Sweden. Such gatherings are a unique chance to mobilize political support for a people-centered agenda for urban development. High-ranking government officials from countries in Europe, Africa, Asia, and South America, joined slum community leaders to discuss how to support initiatives of locally-rooted community organizations in cities throughout the Global South.

The UPFI provides seed funding to local urban poor funds of national federations affiliated to SDI. The idea is that the money provided by UPFI catalyzes local initiatives that can leverage further resources, have an impact on urban policy, demonstrate possibilities for reaching further scale, and increase sustainable financial practices of the poor through savings.

“I see it as a tool that supports the SDI affiliates in upscaling their development,” says Rose Molokoane, member of a savings scheme of the Federation of the Urban Poor in Oukasie, South Africa, and deputy president of SDI. “For us to have one basket of funds draws the funders to come closer together to create space for the poor and strengthens our self-reliance.”

The Zimbabwe Homeless People’s Federation (ZHPF) is an instructive example of the ways in which the poor control their developmental future through the UPFI. The ZHPF has used the funding to build “eco-san” toilets in cities such as Bulawayo and Chinhoyi. These toilets are pioneering a cheaper, environmentally-friendly alternative to basic sanitation provision in slums where the high cost of traditional basic services has impeded any kind of incremental development.

The Malawian Federation, also affiliated to SDI, served as a horizontal resource for the development of the ecosan model. In March of this year, a Malawian team comprised of three builders, one federation member and a Water and Sanitation Programme Manager, went to Zimbabwe to teach the ZHPF about the ecosan toilets and construct model toilets in those areas. The projects have enabled the ZHPF to change policy at the local level by involving city officials, and have also had an impact up to the national level. The ZHPF is the leading community voice of the poor for housing in negotiations for a new Zimbabwean constitution. The incremental upgrading strategies employed by the Federation, especially with regards to sanitation, are affecting local university planning curricula as well.

The Stockholm meeting of the UPFI board, hosted by the Swedish government, was coupled with a seminar on “reshaping financial markets to make them more relevant to the poorest of the poor.” This seminar featured a mix of slum dweller activists, academics, NGO professionals, and finance experts, presenting on policy and practice in urban settings in Asia, Africa, and South America. Over 75 people from the Swedish business world attended the seminar, and the hope is that private institutions can begin working to develop financial instruments for poor individuals and communities. Access to finance is one of the biggest challenges impeding many people’s ability to get out of poverty, especially in urban environment.

Jockin Arputham is the founder of the National Slum Dwellers Federation in India and president of SDI: “To empower the poor you need to organize the people and make them taste the fruit of organizing. Your power is strengthened by your negotiating power. You don’t go empty-handed to negotiate with government. The UPFI helps people to win the kind of power you need to negotiate with government: statistics, finance, everything. Now no government cannot ignore SDI. There’s no way anyone can ignore this process. They have to engage communities,” he says.

The Swedish government has posted a video from a press conference at the UPFI board meeting, as well as documents used in presentations at the following day’s seminar.

For a better Mumbai, fix the slums first ...

This article was first published in The Hindu.  By Jockin Arputham The government has plenty...