"Crafting a suit that fits" 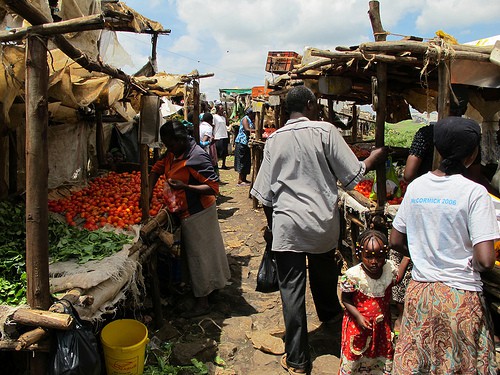 pictured above: A crowded market area in Mukuru, Nairobi.

Editor’s note: The following text is the foreword to a community-led profile, or inventory, of all informal settlements in Nairobi, Kenya, published in 2009.

As we were writing this inventory, residents of Mukuru Sinai came to Pamoja Trust for help in fighting off an eviction threat. Sinai is part of a belt of slums collectively called Mukuru that run along the length of Nairobi’s industrial area. Sinai is built on both sides of the petroleum pipeline. A dangerous place to live. The state owned corporation, Kenya Pipeline Company had issued an eviction notice to the residents. The corporation had plans to expand the line. Sinai’s residents have no legal title to the land and so the company did not feel compelled provide compensation or alternative relocation options. The residents said they would go with a relocation plan.

This story is not unique for Kenyan slum dwellers. Theirs is a-wrong-way-round world. Conventionally, security of tenure is the quiet enjoyment of personal space bestowed on citizens by their Government. It is different for slum residents. Since no one will bestow any space to them, they have little choice but to squat on any parcel that is unutilized. And by virtue of numbers, because they outnumber those legally bestowed citizens, their claim carries truth – not all the truth but certainly some truth.

So the Mukuru story epitomizes a battle of truths for urban space. Losing the battle for the slums would mean the residents of Sinai, and a hundred other slums, become entirely destitute. It is not a battle they can afford to lose. Yet, to yield to their existence would be to accept a breakdown of social order and the rule of law. Then, only a negotiated position that appreciates the values, believes and needs of the state, and those of its dislocated poor, is a workable way forward.

In Kenya today, there is a process of negotiation between the slums and the state. Rather unfortunately this process is characterized by aggression. The state declares its commitment to solving the slum problem and sets up a program within a Ministry to coordinate slum upgrading. The state then finds that the slums are very inconveniently located. There are slums on riparian, road, power, railway and other utility reserves and on private poverty. It follows that whenever any organ of the state, except the slum upgrading program, is confronted with a slum, that organ seeks to evict the people. And on the slum dweller’s end, every eviction is resisted. If and when resistance fails the next step is inevitably the invasion of some other contestable land.

Our purpose in putting together this Inventory is to change the nature of the negotiation. To provide an appreciation of the scale and depth of the slum problem. To provide a starting point for positive action. To impress, hopefully that evicting slums is in the long run futile. To encourage the development of a plan to ‘sort out’ the slums. We realize that policies, as opposed to a plan, assume that slums are part of the human condition. They are not. They are quantifiable and the challenge surmountable.

In order to do this, we found it necessary to collect and present the story of each slum in the city. After many years of working with slums, we know that no slum is exactly the same as any other. The ratio of structure owners (the informal equivalent of landlords) to tenants may vary anywhere from 1 structure owner to 100 tenants or adversely 100 to 1 tenant. The physical locations and layouts; demographics; histories and economies, fit only the broadest of ranges.

This was important because we are persuaded that no upgrading model or plan, by the fact of its existence, will change the urban landscape. For there to be a change, there must be an intervention in each and every slum. An intervention that appreciates each slum’s unique set of circumstances and therefore negotiates and crafts a suit that fits. It was important to present information in this manner because, today in Kenya, the process of negotiation will be shaped by the amount of information that replaces perception as its basis.

Everything else we threw into the Inventory – maps, pictures and case studies are there to give form and life to what may otherwise be a faceless, colourless monologue of discontentment. In describing the slums we did not derive variables from professional, academic or technical strains. That pallet does not have all the colours you need to paint the informal reality. Yet even the Inventory is not the complete picture. The full motion picture is only available for those inspired to wander down twisted, slippery, narrow aisles, jump over open sewers, take in the smells of one-year old garbage, taste stewed chicken beaks or roasted fish gills, and share in the fear of being bulldozed in the middle of the night.

A publication by C40 Cities, ICLEI, IIED, SDI, and UN Habitat, with support from Cities...