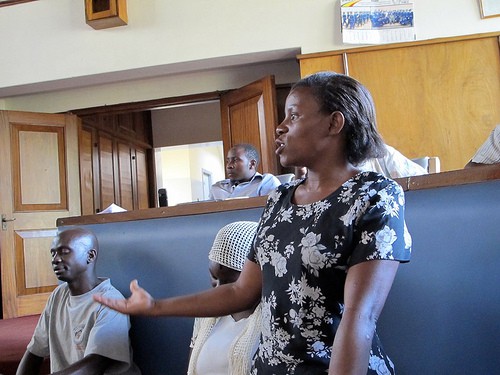 In February, I joined members of slum dweller federations from Kenya, Tanzania, South Africa, and Zimbabwe, who were on an exchange to assist the Ugandan federation to profile the city of Mbale. Just in this past year, the federation, supported by NGO Actogether Uganda, has profiled the cities of Arua, Kabale, Jinja, and Mbarara, in addition to Mbale. I am now back in Uganda, as the federation and Actogether launches household enumerations in each of these cities.

A key challenge for communities that collect information about themselves through city-wide profiling, and household enumerations, is how to make the most impact with the information they have. This can mean getting the information endorsed as official by local authorities, which in turn ensures that it becomes the basis for urban planning decisions in a city. The information collection can also help facilitate closer relations between organized communities and their government so that they can work together to prioritize allocation of resources and improve informal settlements.

The information can also be used to create a public awareness about the planning challenges that exist, and to develop political will within government to approach communities as equal partners in development. Ugandans opened up the New Vision newspaper yesterday to learn how slum dwellers in every informal settlement in Mbale are drinking water contaminated by human waste. New Vision is the most widely-circulated newspaper in the country. A local leader named Richard Wandoba used the information collected through the recent city-wide profiling exercise to raise awareness about drinking water conditions in slums throughout the city. This kind of city-wide approach means that organized groups of the urban poor are now ready to meet with local authorities as equals to engage around planning issues, such as water provision.

You can find a JPEG file of the full article here.

**Cross-posted from Global Land Tool Network** With the enthusiasm and cooperation of the Government of Uganda through its Ministry of Land, Housing and Urban Development (MLHUD),  municipal officials, community leaders...