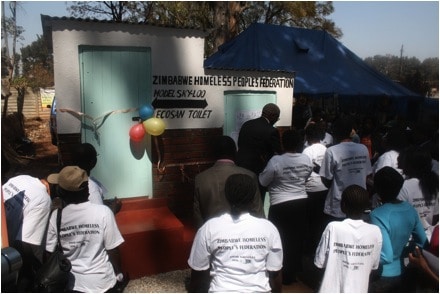 By George Masimba, Dialogue on Shelter

The Zimbabwean Alliance for the first time in its history exhibited at the Zimbabwe Agricultural Show. The exhibition has provided a platform for the alliance to reach out and publicise the philosophy behind the uMfelandawonye (Federation) process. In the same vein, the show has also presented a glorious opportunity for the various Federation business projects to establish and penetrate uncharted markets. But most importantly, this inaugural exhibition was used to showcase the eco-san toilet popularly known as ‘sky-loo’ — a technology imported from Malawi. The SDI family graced the show and was represented by Malawi and Zambia from the southern Africa hub.

The ‘sky-loo’ technology came into being following an exchange visit to Malawi where the concept has been adopted and is being used on a very wide scale. After the trip to familiarise with the technology, which involved both Dialogue on Shelter and the Zimbabwe Homeless People’s Federation, a lot of excitement was generated within the alliance. Soon, negotiations started with Chinhoyi Municipality to allow eco-san units to be built so that families could move onto an allocated piece of land. The municipality agreed and more than 10 eco-san units have been built and over 50 families have so far moved onto their plots. Once the families occupied their plots, they began constructing their own houses. In this regard, the eco-san technology has opened a lot of opportunities for the urban poor.

It is with the possibility to scale up this approach in mind that the alliance resolved to showcase the technology at the Zimbabwe Agricultural Show. An eco-san demonstration unit was therefore constructed at the Federation stand, and as a way of heightening the stakes and potential for buy-in the His Worship the Mayor of Harare was invited to officially open it. Among other stakeholders, the official opening ceremony was attended by Ministry of Housing officials, Harare City Council, UNHabitat, NGOs (ZINAHCO and ZERO) and the University of Zimbabwe. In his speech, the Mayor acknowledged the need to support such innovations around alternative sanitation strategies and expressed that the City was committed to embrace such ideas. The Malawian Federation also presented its solidarity speech which described how this model had helped a number of households to access affordable services and also to contain cholera outbreaks.

On the other hand, besides the eco-san technology, the exhibition has also created opportunities for the income generating projects from across the country’s 43 chapters of the Federation. Following the business skills training sessions that were earlier facilitated by Dialogue on Shelter and the subsequent loans that were disbursed to the various groups by the Gungano Fund, it was only appropriate that all these initiatives be complemented by a strong marketing drive. The exhibition therefore provided a perfect platform to do just that. As a result, Federation exhibitors displayed goods ranging from batik products to herbal medicines and building materials, all produced by uMfelandawonye members in various projects.

In Situ Upgrading and Accessible Cities

Accessible and inclusive cities demand systems and policies that provide the poor with equal access to the social, economic, and service benefits of the formal city. Relocation to the periphery...