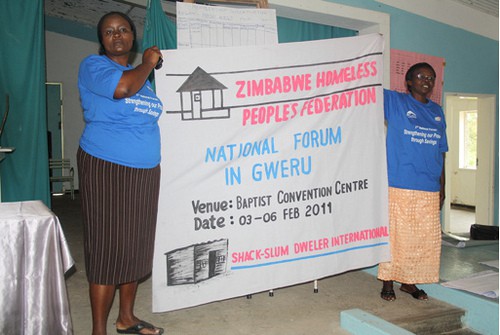 By George Masimba, Dialogue on Shelter

The Zimbabwean Alliance hosted the second National Forum whose theme was ‘strengthening our process through savings’. The Forum which was held in the Midlands Province in Gweru was attended by Federation members from the seven regions namely Harare, Matebeleland South Matebeleland North, Masvingo, Mashonaland West, Manicaland and Midlands.

SDI affiliates from South Africa, Namibia, Malawi and Zambia graced the occasion and assisted greatly with the discussions. The Forum’s main agenda involved presentation of regional reports, reflection on the Federation rituals and drafting of regional work-plans.

The various regions reported how they had expanded the Federation coverage through opening savings schemes in new areas. In areas around Harare, new initiatives like Shamva, Bindura, Guruve and Marondera had now been mobilised whilst Matebeleland South now encorporated areas that include Plumtree, Kezi, Gwambe, Esigodini and Tsholotsho. The countrywide mobilisation of new areas had seen uMfelandawonye chapters grow from 32 areas in 2008 to the current 54 areas. The different regions also reported on the establishment of networks in their areas – a strategy that had seen participation of more members and strengthening of groups through breaking regions into smaller clusters. Networks were also reported to be facilitating the decentralisation of regional budgets.

A majority of savings schemes outlined how they had started the creative usage of savings through the mobilisation of money for buying groceries, pre-purchasing building materials and availing loans for business projects. Some of the products from the business ventures were also on display at the Forum. Harare region, for instance, showcased products from a project that was producing building materials and herbal medicines. The various regions also highlighted that the move to ensure the immediate usage of savings had been necessitated by the lack of trust in the banking sector.

The regional reports were then followed by specific presentations on the Federation rituals and components. Under the health component, it was reported that a pilot mobile clinic had been set up and been functional for close to three months. The clinic was currently stationed at the Crowborough Federation resource centre catering for the wider community as well.

The presentation on land noted that negotiations with both central and local government institutions had since yielded a total of around 5354 stands across the country. Infrastructure was however reported to be the biggest challenge hence there was a now a well-coordinated campaign for alternatives like boreholes and ecological sanitation units. Whilst on one hand lobbying was going on with officials to have buy-in, the Federation’s capacity to build the eco-san toilets was being developed through training sessions and exchange visits. Seven artisans training sessions have so far been conducted in the country’s six regions.

Enumerations as a powerful tool for negotiations had been expanded and sharpened to include mapping. The national enumeration team reported how they had started building and strengthening their teams in preparation for a number of surveys as well as the Harare Slum Upgrading Programme. Lastly, the Forum participants then grouped according to the regions in order to prepare regional work plans on the basis of the different areas’ priorities.

Consistent with current practice with other SDI hubs, the Southern Hub of Africa met in Zimbabwe around the latter’s National Forum. The five SDI affiliates in attendance appraised each other through country reports.

The Malawians provided feedback pertaining to their National Forum held in 2010 and thanked the other affiliates for their support. The Malawians also reported on a series of exchanges around water and sanitation that had taken place with Zimbabwe. The activities in Malawi had also started to have impact on policy as shown by the Malawian government’s Growth and Development Strategy which was modelled around the Federation concept.

The Zambians indicated that they were currently busy with a number of housing projects as well as building resource centres hence they had plans to strengthen their capacity through artisans training programmes. In addition, the Zambians had scheduled two Forums on Housing and Health in the first half of the year which drew a lot of interest from other affiliates.

In Swaziland, the need for Federation strengthening emerged as the main priority although it was mentioned that interaction with central and local government had significantly improved. A national forum held in December inn Swaziland had helped to boost the savings schemes.

In Harare, the Federation was implementing Slum Upgrading Project in partnership with the City of Harare and already an exchange had taken place with the Malawians around this project. The Zimbabweans noted that there were plans to scale up current health programmes.

In Namibia, a countrywide 5-year programme (Community Land Information Programme CLIP) documenting informal settlements, was reported to be underway. The Namibians also informed the meeting about the pending programmes aimed at supporting the emerging process in Angola.

The South Africans invited other affiliates to their National Forum earmarked for March 2011. In particular, FEDUP requested support on health issues from other affiliates during the Forum.

After the country reports the meeting then went on to discuss the UPFI call for proposals whose sum total for the entire hub was US$100000.00 with a repayment period of 3 years. The affiliates discussed the terms for accessing UPFI funds and the following country-level issues were noted as the basis for allocation;

On the project level, the following specific considerations were observed as critical for the disbursement of funds;

In the end, the affiliates agreed on the following allocations for the UPFI call;

*Namibia did not have a proposal during the time of meeting

The following exchange programmes for the hub were planned for the year 2011.