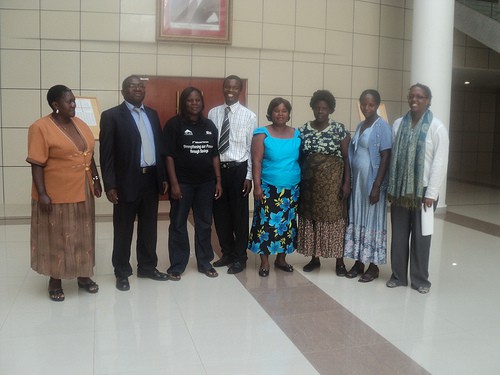 pictured above: In Kariba, members of the Zimbabwe Homeless People’s Federation talk about one of their infrastructure projects with representative of the national government’s Parliamentary portfolio committee on housing.

Many members of the Zimbabwe Homeless People’s Federation were among the victims of Zimbabwe’s infamous Operation Murambatsvina in 2005. Then, over 700,000 were displaced nationwide by a government program of evicting primarily informal urban dwellers.

Since then, the Federation has rebuilt its membership by mobilizing new savings schemes, and reconstituting old ones. There are currently over 42,000 members actively saving in 53 cities or towns. Further, the Federation has provided 14,450 families with tenure, and built over 2,000 houses.

But it is not just the numbers that speak volumes. In 2010, the Federation, along with support NGO Dialogue on Shelter, began to engage with the Parliamentary Portfolio Committee on Public Works and National Housing. This is the committee exploring how housing and shelter issues are to be incorporated into a new constitution for Zimbabwe.

A new report from the Portfolio Committee demonstrates how the patient work of the Federation to translate its struggles to real action on the ground is influencing how shelter issues are understood in the formal political space. In the report, the Committee emphasizes its desire to understand “short-term and immediate solutions to the escalating housing crisis in our nation.” As part of this mission, the Committee visited projects of the Federation in Epworth, which is adjacent to Harare, and Kariba.

The Committee’s report describes the process as follows:

The Federation uses the model of incremental development whereby priority is given to the most important facilities and then gradually followed by the least basic ones. Incremental development is done on either infrastructure or housing development. Water and sewer are put first while roads come at a later stage on infrastructure development. At the beginning those basic services are used communally, and then families graduate into individualized connection when they can afford them. In housing development, poor communities start both with a single or two-roomed unit with a temporary toilet and a stand-pipe and upgrade their structures until the whole house is complete.

Town councils in Zimbabwe have some of the highest standards for housing in Africa. In Epworth, the Parliamentary Committee discovered what poor people have understood for quite some time. A meager 1% of all the houses in Epworth meet the council’s housing standards, and 65% of residents live in informal dwellings. In one ward within the council, everyone lives informally and without serviced stands.

Given this realization, the committee submitted that “there are over 300,000 people who are informally settled [in Zimbabwe] and as such, Government intervention is necessary and unavoidable if the town is to develop and meet the standards required by the Urban Councils Act.”

This is a significant realization in order for any government to begin addressing the scale of urban growth and attendant informality. The resources and regulatory framework provided by government are key determinants of the kinds of interventions that are and will be possible. As such, the Committee made three recommendations for principles to underpin a Constitutional right to housing:

(1) Ensuring 0% eviction rate in the country to ensure that the poor are protected in societies.

(2) Ensuring that the Community Based Organizations pay about 20% of the total cost of the land.

(3) Instituting policies to ensure that the vulnerable groups are accommodated, because as of now, the policies are inhibitive and do not guarantee housing to the poor.

The Committee’s overall observations of the work of the Federation also noted the centrality of women to sustainable urban development:

It was interesting to note that the whole process mirrored the community through effective participation and the community owned and identified with the development. Communities were the agents and actors of development rather than mere beneficiaries. Thus, they developed a strong sense of ownership of both their successes and failures. Community involvement significantly reduced the cost of housing development projects and made them affordable through contributions in the form of ‘sweat equity.’

A striking aspect that was witness by the Committee was the Federation’s strategy that put women in the forefront in all the activities that addressed homelessness and poverty. They led the process of problem identification and development of solutions to both household and community issues. Women worked side-by-side with lead builders as they assisted in the construction of houses. The reason put forward was that women bear most of the challenges of and are hit hardest by poverty. The other reason was that, women were given the space to balance this previously marginalized group. Thus, if women’s lives are changed, the whole community changes.

In conclusion, the Committee recommends four areas of policy changes to help enact the proposed “right to housing” in Zimbabwe’s new constitution:

(1) Poor communities can only afford infrastructure services on an incremental basis. The committee’s recommendation is that Government adopt alternative models such as ecological sanitation to allow the poor to develop houses and accelerate housing delivery.

(2) Government to subsidize the provision of on-site and off-site infrastructure. … Incremental development ought to be accepted by the Government and viewed as a normal way of development for organized low income groups. In view of the fact that the provision of housing is the responsibility of Government, it is the Committee’s feeling that Government work in partnership with Community Based groups on housing issues even in the planning process. … Subsidies may not necessarily be money alone but the cost of development can also be cut, for instance, through approval fee exemptions on bulk standard plans or offering of engineering services to CBOs’ developmental work.

(3) The government can also avail alternative financial options for housing for the poor, and this will alternatively improve the pace at which construction projects are developed. This window can take the form of a Housing Development Bank controlled and owned by Community Based Organizations. This housing finance ought to be channeled directly to the Community Based Organizations.