Between the “informal” and the “formal”: Slum upgrading in South Africa 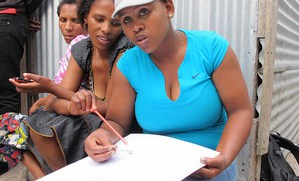 Building a bridge between the “informal” and the “formal”: Reflections on slum upgrading in South Africa

In January, the South African SDI Alliance affirmed a vision to build city-wide networks of informal settlement communities that mobilize to upgrade their settlements. Nearly six months later, about 30 representatives of the Alliance partners — the Informal Settlement Network (ISN), Federation of the Urban and Rural Poor (FEDUP), Community Organisation Resource Centre (CORC), iKhayalami, and uTshani Fund — met in Cape Town to reflect on the upgrading work that has been accomplished thus far.

On 7 June, visitors from elsewhere in South Africa visited the settlement of Sheffield Road. There, the ISN and CORC have worked with community leadership to re-arrange or “re-block” shacks in the dense settlement built on a road reserve. In addition to re-arranging the settlement spatially, they have built upgraded shack shelters. As the project has fallen within the ambit of a city-wide partnership between the Alliance and the Metropolitan Municipality of Cape Town, the community has been able to work with the City to install new toilets in locations planned by the community as part of the arrangement of shacks.

The Alliance then spent the next two days reflecting on the way in which the upgrading process has unfolded in Sheffield Road. The lessons from this case study served as a springboard for a deeper discussion around basic principles for upgrading projects ongoing or still to come both in Cape Town and in the Alliance nationwide.

The underlying lesson of this discussion is that upgrading informal settlements is anything but the technical exercise presented by many in the formal world such as governments, professionals, and academics. The primary challenge lies in the basic fact that upgrading settlements requires the inclusion of whole affected communities in the processes that go into such improvements. Whether we refer to the political, financial or planning aspects of upgrading, it is the initiative and leadership of organized communities that is the essential ingredient in making a project successful.

Evaluating and learning from Sheffield Road

Critical feedback from all participants emphasized both positive and negative aspects of the process and outcome of the Sheffield Road project. Positives included the demonstration that in situ reconfiguration of space within a settlement can make a large contribution to the building of social bonds and life within a settlement, as well create a safer environment from both crime and natural calamities. Further, the relationship of the city-wide ISN and the leadership of the Sheffield Road community helped build a bridge to municipal officials. This resulted in the provision of new toilets located as part of a spatial layout plan developed by the community. Though leadership structures have been challenged throughout this process, the existence of strong leaders able to mobilize residents through a risky process of tearing down shacks and rebuilding, has been a powerful impetus for the success of the project.

Participants noted an apparent dependency on technical support from the NGO, insufficient contributions from savings, difficulties with uninterested or unaccountable leadership structures, and a general lack of “sensitization” of the community. It was emphasized that community mobilization is the key to the sustainability of any upgrading project. As long as the NGO drives the process, the project fosters a growing sense of entitlement in the community and prevents residents from taking ownership.

What is blocking out?

Blocking out is a way of refining the planning of informal settlements. Put more simply, “blocking out” or “re-blocking” refers to a rearrangement of shacks in an informal settlement. Re-blocking is a way of addressing the larger concept of spatial reconfiguration versus the simple delineation of sites. The difference is between focusing on individual households or space that is used by whole communities. The space can be used for communal amenities, or to create lanes for installation of services such as water, sanitation and electricity.

Blocking out is also understood as a way to increase tenure. It demonstrates community capacity with regard to planning, and makes way for installation of services, which can provide a greater level of security to residents.

In the case of Sheffield Road, iKhayalami, a NGO linked to CORC, provided replacement zinc shelters to residents who moved their shacks as part of the “re-blocking” exercise. The Alliance debated whether this should be linked to “re-blocking” and how it should be done.

Positive aspects of provision of shelter are primarily related to the fact that residents’ shelters may be damaged in the course of moving their shacks. Further, they are only given four walls, so they contribute to the building of their new shacks, breeding stronger ownership of the project. Finally, the provision of a shelter upgrade through iKhayalami was considered necessary for mobilizing the community in a non-disaster situation.

Criticisms of this approach centered on the linking of private housing space — the upgraded shack — to what is primarily a project about public living space — the re-blocked settlement. Some participants noted that the upgraded shelter may be seen as minimizing the existing investments that residents make into their shelters prior to the re-blocking exercise. A related point was that informal settlement residents have demonstrated great resourcefulness in building shacks and sourcing material for these shacks. Therefore, provision of a new shelter may distract from larger upgrading projects. Some suggested that the provision of new shelters in the context of re-blocking could amount to a reduced form of “RDP” housing provision, and could set an example for a R5,000 subsidy for improved shack versus a R50,000 subsidy for a government house.

Another critique suggested that it would not be cost-effective for CORC/iKhayalami to provide heavily subsidized shelter upgrading solutions at any kind of meaningful scale. While some participants saw this as a critique of working to upgrade private shelter through provision of modular iKhayalami-type materials, an additional view was that this was also a way to access the resources of the State for the poor. The NGO would be making an up-front investment to get much greater returns in terms of the potential resources that could be secured from the State. The view is that funds such as those coming from Emergency Housing Fund or Urban Settlements Development Grant could be made available at large scale for such an upgrading protocol, given a proper demonstration model. The popularity of the iKhayalami shelters in the projects proposed to the Community Upgrading Finance Facility (CUFF) board, even with a 10% required contribution on the part of informal settlement residents, indicates that this may be a favorable option.

Finally, there was a discussion about the difference between finance for public upgrading improvements — eg. public space, basic services — and funding constraints for individual improvements — eg. shelter. This led to a discussion of the possibility of trying to implement a financial instrument for shelter upgrades. It could be partly microcredit, which would help provide some recognition for the investments that families make to upgrade their shelters. By the same token, the discussion acknowledged that upgrading an informal shelter is a risk that would be very difficult to get banks to take on without some kind of further guarantee. Hence a mix of grant funding and microcredit was proposed as a way to a) provide access to finance, and deepen formal acknowledgment of investments that the poor make into their shelters, and b) to develop a potentially sustainable mechanism for both securing finances for upgrading informal households from a State nominally keen on providing subsidies for poverty alleviation, while simultaneously “banking” an “unbanked” sector.

How do communities organize to upgrade?

“Blocking out is actually a mobilization tool more than anything else. We are saying that we are an Informal Settlement Network. So we need to be preaching informal settlement upgrading.”

The case of Sheffield Road highlights a number of challenges regarding community organization. The long time frame of the project is due primarily to difficulties in mobilizing savings contributions for the shelter upgrade. Further, the ISN leadership engagement with the community included the institution of a new community leadership structure that was not initially accepted by the community. Ultimately, there was a sense that it was especially difficult to build a constituency for upgrading at Sheffield Road without dangling the carrot of a shelter upgrade.

But if a community-led approach to upgrading is to be taken to scale within the Alliance, then everyone agreed that the key conversation is about how communities organize themselves. Savings has long been the backbone activity of the Alliance partners. Yet savings has been one of the most difficult activities to mobilize in the upgrading process. A central contradiction is that savings has long been a membership-based activity linked primarily to FEDUP. But upgrading is a community-wide process, which therefore requires community-wide pooling of financial resources.

In Sheffield Road, re-blocking has been done in clusters of about 15 shacks, and savings has also been organized at that level. In Umlazi in Durban, the community divided itself up into five different sections, and has begun saving by section for upgrading projects.

Such strategies for community-wide savings have a big impact on the methods of organization that communities are finding necessary for upgrading at the whole settlement scale. In Slovo Park, in Johannesburg, the community leadership realized that it had to organize structures all the way down to the block or street level in order to be effective. “We realized that we were holding lots of meetings and people weren’t coming,” said community leader Mohau Melani. “We realized that we have to go down to the block level.”

It was further noted that enumeration can be an effective tool for promoting such organization. Perhaps even more importantly the use of enumeration as a tool for understanding the most important needs of a community was underlined. Participants agreed that, in most cases, the enumerations taking place within the Alliance are not being used to the full extent of their potential effectiveness.

A social movement aimed at the upgrading of informal settlements is an issue-based social movement. Therefore, the primary activities of this movement need to be geared towards identifying developmental issues — through tools like enumeration, profiling, and regional dialogues — as well as the pooling of political and financial resources — through the establishment of deeper leadership structures, savings schemes, and participation of women.

The challenge of scale

The establishment of the Community Upgrading Finance Facility (CUFF) is an initiative of the Alliance designed to encourage a constituency for community-driven upgrading projects nationwide. CUFF operates through a bottom-up structure. Informal settlement and backyard shack dweller communities make proposals to a board composed of a majority of slum dwellers, for grant funding for upgrading projects.

The intention of CUFF is to demonstrate a wide multiplicity of upgrading solutions, methods for community leadership of upgrading projects, and institutional structures for bottom-up, city-wide finance facilities for upgrading that can eventually be adopted by the State. CUFF was established earlier this year, but few of the projects that the board has approved are yet up and running. Participants in the meeting agreed that a renewed focus on deep mobilization, as detailed in the previous section, needs to be the primary focus in order to generate a constituency for projects that will be creative, effective, respond to community need, and have potential for going to larger scale.