Slum Dwellers as Professors and Planners 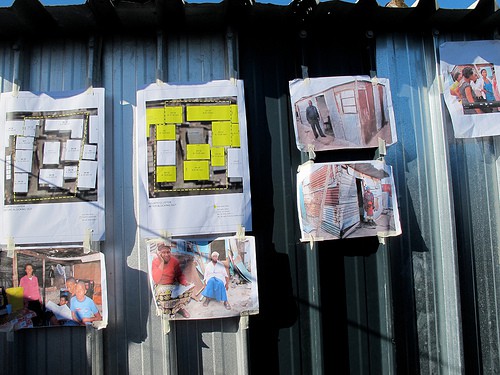 Floods, Fires. Lurking danger while searching for a place to shit. And, above all, the spectre of police and bulldozers waiting outside your door ordering you to leave your home.

To the academics, planners, and policy-makers, such an existence is informal and illegal. To those living in urban slum settlements throughout Africa, Asia, and Latin America, it is the stuff of daily life. Recent engagements between slum dweller networks linked to SDI and universities show how this gap between theory and reality is shrinking.

The challenge of developing institutions to adequately address the very immediate issues that slum dwellers face is often a challenge of having the right information at hand. Usually, professional and academic planners use limited — and usually aggregated — information upon which to base their decisions. They envision cities that extend the ways in which they already live their lives.

But the poor also have visions for their cities. As one South African newspaper headlined a piece by South African Federation president Patrick Magebhula, they are “moving from slum survivors to urban planners.” The SDI network is now developing a range of experiences in which slum dweller communities collect detailed information about themselves in order to organize, plan and impact the ways in which they interact with the formal world.

In Kenya, the Federation, known as Muungano wa wanavijiji, is working with students from the University of Nairobi and University of California—Berkeley in the United States, to develop a zonal plan for the Mathare Valley in Nairobi. The Federation savings schemes in the community work with residents to survey every house, and then use this information to map the settlement jointly using GIS technology. This technology integrates the socio-economic data collected into a visual picture of the way in which the social dimensions of the community exist spatially.

We have often discussed the enumeration, mapping, and profiling activities of SDI federations in this newsletter. Now, federations are using links with planning programs in local universities to build broader understanding of community-led planning activities. In doing so, they are creating new platforms to build political backing for the cities that they envision. These are cities that finally appreciate the contributions of informal organization, and include these contributions in future planning.

The Informal Settlement Network in South Africa is working with two adjacent large informal settlements in Cape Town called Barcelona and Europe. The communities undertook their own processes of enumeration and mapping. Now, they are working with students at the University of Cape Town to translate this information into a vision for the future. The settlements are on top of a landfill site, which is polluting one of the main freshwater reserves in the city. It is clear that this will increasingly come on the radar for city planners, as water resources become scarcer. So the community is getting ahead of the city by developing its own plan.

Here, the role of universities to help translate to the formal world the information that communities collect is vital. The communities use the tools of the academics to articulate their existing social realities and economic contribution to the city as a whole. For instance, economic analysis emerging from the community’s enumeration estimates the community’s economic activity as generating about USD 6 million as yearly expenditure.

A similar case is in a large informal settlement called Langrug in the relatively small municipality of Stellenbosch near Cape Town in South Africa. Residents have enumerated the settlement and, led by two young women without high school education, mapped the information. The community leadership now use this information to negotiate with the municipality for toilets, installation of sewers and water pipes, and to find the space to relocate those members of the community who live in a flood plain next to a small river that runs through the settlement.

Last week, residents of Barcelona and Langrug gave a unique lecture about this work to students in the University of Cape Town’s M.Phil program in Community Development and Planning. Audio of the lecture by Vuyani Mnyango from Barcelona and Kholeka Xuza and Olwethu Mvandaba from Langrug can be found here, as well as an accompanying slideshow here.

This is not the first time that slum dweller leaders from SDI Federations have become professors to the professionals and academics. Last year, members of the Zimbabwean Federation traveled to the University of Manchester in the UK to teach economics students. And earlier this month, community leaders from Cape Town and Durban in South Africa, traveled to Perth, Australia, to present to the annual World Planning Schools Congress. Listen to an interview on Australian Broadcasting Corporation’s “Futuretense” radio show with the South African Federation’s Melanie Manuel here. In order to further such engagements, SDI signed a Memorandum of Understanding with the Association of African Planning School in November 2010.

University students have learned from the communities how informal settlement dwellers live and work, as well as how they organize themselves. The students have then contributed the tools of planners to articulate this information in a way that serves as a platform for the communities to engage with city officials on future planning for the area. For example, in June, after talking with residents from Barcelona and Europe around the plans they developed with the University of Cape Town students, Cape Town municipal officials were pleasantly surprised. “To get to this level of understanding, it can take us years of working through expensive consultants,” said Natasha Murray, Head of Planning for Informal Settlements at the City of Cape Town.

The linchpins of this work are the information collection of activities of Federations and slum dweller communities. These communities collect information at the household level, leveraging a wealth of data that can be entirely disaggregated. They then plot the information onto maps, and work with highly detailed socio-economic and spatial data to develop future plans. Universities help translate this data using formal tools that create a framework for communities to engage as leading partners to plan with city governments.

This is a striking new role for urban poor communities in city development. Such communities are becoming the professors and planners. They are working to use this information to build stronger internal structures and more effective city-wide networks. They are also challenging their newfound partners. Are the planners, academics, and policy makers ready to listen to these doers? And how can they change their practice to a) provide the necessary platforms for communities to tell their long-suppressed stories, and b) to articulate their compelling visions for the future?