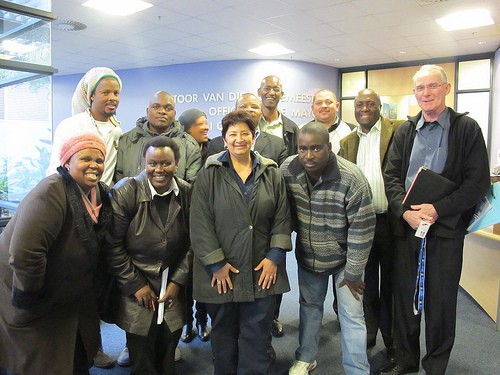 Community development is often a hard, slow process that requires patience and dedication.  The South African SDI Alliance takes the position that community members are actually the linchpin to the success of community development, and nothing less than full inclusion in their own development processes is sufficient.  But how do you tackle the problems the urban poor face if the very city they live in effectively excludes them and government departments operate in isolation, trying to address issues which require an integrated approach?  The solution lies in the concept of inclusion, and the Alliance has learnt that the City needs to be included in its efforts.  But the inclusion of the City does not rest on the shoulders’ of its Informal Settlement Unit alone and the Alliance knows that a more strategic approach is required by drawing in the help of all role-players.

It was in this spirit that the South African SDI Alliance introduced itself to the new Mayor of Cape Town, Patricia de Lille, at a meeting at the Civic Centre on 4 August 2011.  In doing so, the Alliance aimed to garner support from the City for an integrated approach in tackling informal settlement issues and to highlight that community members were a valuable resource along with all government departments.   Representatives from the Informal Settlement Network (ISN) and the Community Organisation Resource Centre (CORC) described the history and nature of the partnership to the gathering, which included representatives from the City’s Human Settlements, Utilities and Urbanisation Departments as well as the Informal Settlement Unit’s manager.  Since 2009, the Alliance has been working with the Informal Settlement Unit within the City of Cape Town’s Housing Department, and together the partnership has identified 23 settlements where joint pilot projects for incremental upgrading would be executed.  The Mayor commended the fact that the Alliance was working towards solving one of the country’s biggest problems and affirmed that the City’s new administration was more than willing to work with them in this regard.

The Alliance representatives revealed that there were advantages in partnering with the City but expressed concern that not all departments were committed to the partnership.  The Director of Urbanisation echoed these sentiments and explained that steps were being taken to address this issue.  The Mayor affirmed this and envisaged practical engagement with the Alliance on a number of fronts and in particular highlighted that the ISN could make valuable input into the City’s five-year Integrated Development Plan, help the City resolve conflicts in areas that the ISN represents, as well as help establish an accurate database of informal settlements and backyard areas.  She felt that a Memorandum of Understanding needed to be signed to formalise the partnership.  The drafting of this document is currently underway and will be signed the next time the Alliance meets with the Mayor.  It is hoped that this will lead to an integrated departmental approach from the City to informal settlement development issues, and through the Alliance the voice of the urban poor would be included in this process.