Visiting Kisenyi, A Settlement Under Siege 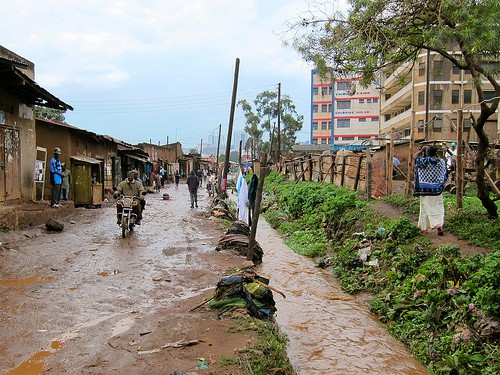 We pull into Kisenyi, Kampala’s largest informal settlement, in a packed bus, rattling down muddy dirt roads. A motorbike heads toward us and women and children line the streets, hanging washing after the rain, playing in puddles. We disembark in front of a tall green building, a sanitation project of the Uganda Shack Dwellers Federation. A group of men and women sit on the front stoop behind sewing machines. Zainabu, one of the local federation leaders, tells us that this is an income generation project providing tailoring services to the community. They work away as we head upstairs.

Zainabu welcomes us, explaining that we are in Kisenyi III and that we will be doing a walking tour of the area, stopping to visit a few Federation members’ homes and income generation projects along the way. The group breaks into song – there is always song – the lyrics are about President Museveni, and the improvements he has brought to Kisenyi’s residents despite the injustice inflicted upon much of country’s people. During the early years of Museveni’s presidency, sewerage, electricity and water services were extended to certain segments of Kisenyi. However, the hardships of daily life remain harsh here. Living quarters are extremely close, and basic services like water and sanitation are sub-standard at best, presenting serious health and hygiene risks to the community. But in the face of poor drainage, flooding, insecure tenure and extremely high densities, the residents of Kisenyi have created a bustling, vibrant community in the heart of Kampala.

We head out into the community. At the base of the sanitation project is a cluster of homes owned by Federation members. Salomi Kakuliremu shows us her savings books, explaining that she purchased her home with a loan from the Ugandan Federation’s urban poor fund, and is paying it back using money she makes selling pineapple juice here in Kisenyi. Her two little girls peek around the curtain at the front of the house as she shows us her savings books, daily savings and loan repayments recorded meticulously with amounts and dates, a thousand Ugandan shillings per day and a secure roof overhead.

We stop next at a poultry project behind one of the houses. Federation members raise chickens in a small coop, selling them for income. Most of the homes here are made from bricks or wattle and daub, they are low with few windows, and the land they sit on belongs to someone else contributing to the daily threat of eviction.

We come to a main road, where Zainabu shows us her home. It is a large brick structure with a wide, clean gutter out front lined with stone so as to preclude flooding. As we move along the street is lined with children. They follow us through the community, shy and laughing behind me. All around us life is happening. A man sells roast meat and chapatti from a street cart, another shop advertises car parts and electronics. 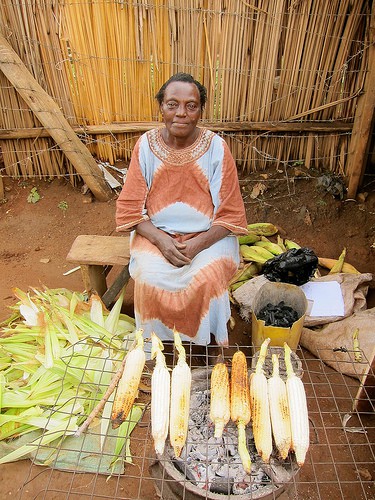 One of the federation members introduces me to Frank Onyapidi. He is striking young man with dark ebony skin, a tan leather jacket and auburn dreadlocks falling down around his face. He sits with a handful of young men inside a shaded shack, sewing game skins into handbags, cell phone holders and shoes. Frank tells me that this is a local project to generate income for young men, to keep them off the streets and out of trouble. They smile, ask where we come from, and I give him my card, wishing him luck with their project, impressed by their handiwork.

Next we are introduced to another Federation member, Jennifer Bukiwa, selling roasted mealies over charcoal. Everyone is impressed with the innovation of the people here, with their initiative to find creative ways to make a living.

Rounding the corner, we make our way down one of the main arteries, a double-lane road that separates Kisenyi III from Kisenyi II. Bordering the road is an open swath of land, riddled with debris. It is the site of a recent eviction. Hundreds of families forced out of their homes and their shacks razed to the ground. The remnants of life, chained in by barbed wire. This is the daily threat – and harsh reality – of informal living. Centrally located settlements like Kisenyi sit on some of the city’s most valuable land, “The gold of Kampala, the real gold of Kampala,” says one Federation member. He is right. Land is scarce, and becoming scarcer as populations urbanize at a rapid pace. But where do the urban poor fit in? How do communities secure their livelihoods, their homes, in the face of power, money, greed and exclusion?

Federation members have begun discussions for land sharing agreements, attempting to broker deals with landowners in order to secure rights to stay on the land. For the urban poor, Kisenyi is their life, the lifeblood of the city, an economic, social and political engine churning away in the middle of Kampala. To others, however, the urban poor seem to be blocking access to gold, taking up space, a nuisance to be removed and relocated. The challenge put forth is how to reconcile these views, how to legitimize the space occupied by the urban poor and make clear their right to the city – how to claim ownership of  these settlements under siege.

In the coming months we will look at a number of centrally located informal settlements in cities across Africa. In Kampala, Harare, Cape Town, Accra, and Nairobi the urban poor face threats of eviction as they attempt to keep their homes on valuable urban land close to the city centers. SDI alliances of the urban poor in these cities have begun to work towards incremental slum upgrading, catalyzing settlement-wide upgrading with precedent setting pilot projects to improve the quality of basic services such as water, sanitation, drainage, road access, waste collection and housing. The hope is that such projects will give urban poor federations the necessary backing to build partnerships with government officials and leverage government resources in order to bring these projects to scale.

As part of this series, SDI will hold conferences in each of the focus cities, bringing together Federation members, their support NGOs and government delegations in a dialogue on citywide incremental slum upgrading strategies. The first conference – during which the site visit to Kisenyi took place – was held in Kampala, Uganda from 8 – 10 August 2011.The official conference report presents a comprehensive look at the conference proceedings, including country action plans for the coming months.

By engaging in such dialogues, the urban poor can take steps to secure the space they have carved out in the hearts of these cities. The underlying vision being the development of protocols for the upgrading of large informal settlements that are under siege. These include in situ upgrading, or suitable and negotiated relocation as opposed to state or market driven eviction or dislocation. Through this kind of incremental, upgrading, cities can begin the necessary task of bridging the informal and the formal, using people-driven, participatory processes to lay the foundations for inclusive, pro-poor cities.

Click here for a deeper look into the fabric of life in Kisenyi in the new book, THIS.IS.KISENYI., published by ACTogether Uganda and the Uganda Shack Dwellers Federation.