Building Partnerships Between the Urban Poor & the City 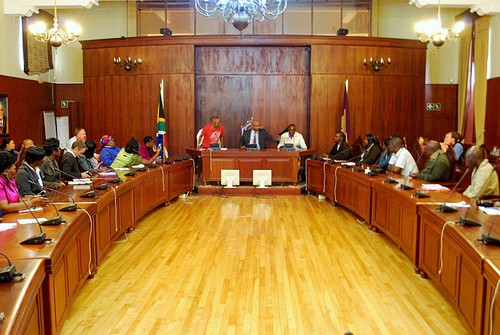 “This is a dream come true in bringing City Councils and communities around a table to talk about possibilities of city-wide informal settlement upgrading,” said Jerry Adlard, the facilitator of the 9th November learning event organised by South African, Namibian and Malawian poor people’s movements aligned to Shack/Slum Dwellers International. Paired with these words, was the call for honest reflection on the objective, structure, achievements, lessons learnt and challenges of unfolding partnerships in the cities of Cape Town, Stellenbosch, Ethekwini, Ekurhuleni, Johannesburg, Windhoek and Lilongwe. The learning event was preceded by two days of site visits to re-blocking, sanitation and relocation projects in the City of Cape Town and Stellenbosch Municipality.

How do various actors implicated in urban development build partnerships to ensure pro-poor and inclusive cities? Contemporary African cities are juxtaposed with multiple layers of social, political, economic and environmental realities, which in many ways are aggravated by its colonial past. On the one hand, cities are the spaces of aspiration, innovation and drivers of social change, and on the other, social polarisation, poverty, conflict and environmental degradation narrate the conditions of large portions of city dwellers. In an age that is characterised by urbanisation, said to transform the cities of Africa, Asia and Latin America, there is arguably never been a time where effective partnerships are more needed.

In many cases, slum dwellers are taking the lead in building partnerships with local authorities with the view to significantly influence the way slum upgrading is conceptualised and operationalised. The full participation of slum dwellers in upgrading programmes is central to meeting the outcomes of sustainable human settlements, tending towards social (and political) change. For instance, slum dwellers of the Homeless People’s Federation of Malawi influenced the Lilongwe City Council’s bureaucracy through its large scale enumeration project which involved churches, tribal chieftaincies and other community based organisations (Lilongwe slums span municipal boundaries and averages in sizes of 50,000 residents). This inclusive project resulted in a shift on the part of the City Council from treating urban development as homogeneous to rural development. The establishment of the Informal Settlement Unit, a department which reports directly to the Mayor, was the result of effective lobbying on the part of the urban poor. This partnership illustrates the limitations of technocrats and the possibilities of communities initiating their own developmental priorities.

In Windhoek, the partnership between the Shack Dwellers Federation of Namibia (SDFN), City of Windhoek and the Polytech is challenging the limitations to transformation implicated in the inherited colonial land use management norms. Space for policy innovation is opening where the contribution and full participation of informal settlements are at the plinth.

Partnerships unfolding in South Africa through the Informal Settlement Network (ISN) and Federation of the Urban Poor (FEDUP) were also discussed at length. Some of the overarching achievements to date have included pilot projects in Cape Town, Durban, Johannesburg and the mining belt in Ekurhuleni whereby communities successfully re-blocked (e.g. Ruimsig (CoJ) and Sheffield Road (CoCT)), installed drainage (Masilunghe (CoCT)), and resettled (Langrug (Stellenbosch) and Lwazi Park (CoCT)). Innovation through upgrading is challenging the enduring (mis)conceptions associated to the subsidised housing paradigm which only looked after the interests of the nucleus family. The SA Alliance’s aspirations for establishing city-wide Urban Poor Funds – funding facilities that support the initiatives of poor communities – have also partially realised when communities successfully leveraged funds from the Stellenbosch Municipality in financing the relocation project and associated service provision.

The institutionalisation of partnerships for city-wide upgrading initiatives is underway. Reports were heard from city officials and community leaders of respective cities. As communities penetrate the seemingly perceived ‘iron towers’ of city bureaucracy and build effective partnerships that influence budgetary allocation and prioritisation, the emphases are shifting from ‘control’ to ‘participation’.

Delegates argued that if the partnership cannot affect political will, for instance to transform the ward councillor structure (in the SA case), then there is no real power to promote the upgrading agenda. One of the Namibian delegates remarked:

“There is a problem to talk about the poor’s ‘self-reliance’ when the issue actually lies with the state’s orientation. Political space is opened to engage around delivery priorities and this is a two-way process; both the state needs to be held accountable, and citizens, demanding basic human rights, need to be proud and organised. One of the main reasons why the partnerships fail to deliver is that the departments don’t understand the difference between upgrading and housing delivery”.