Manenberg Backyarders: Doing What We Can, with What We Have, Where We Are 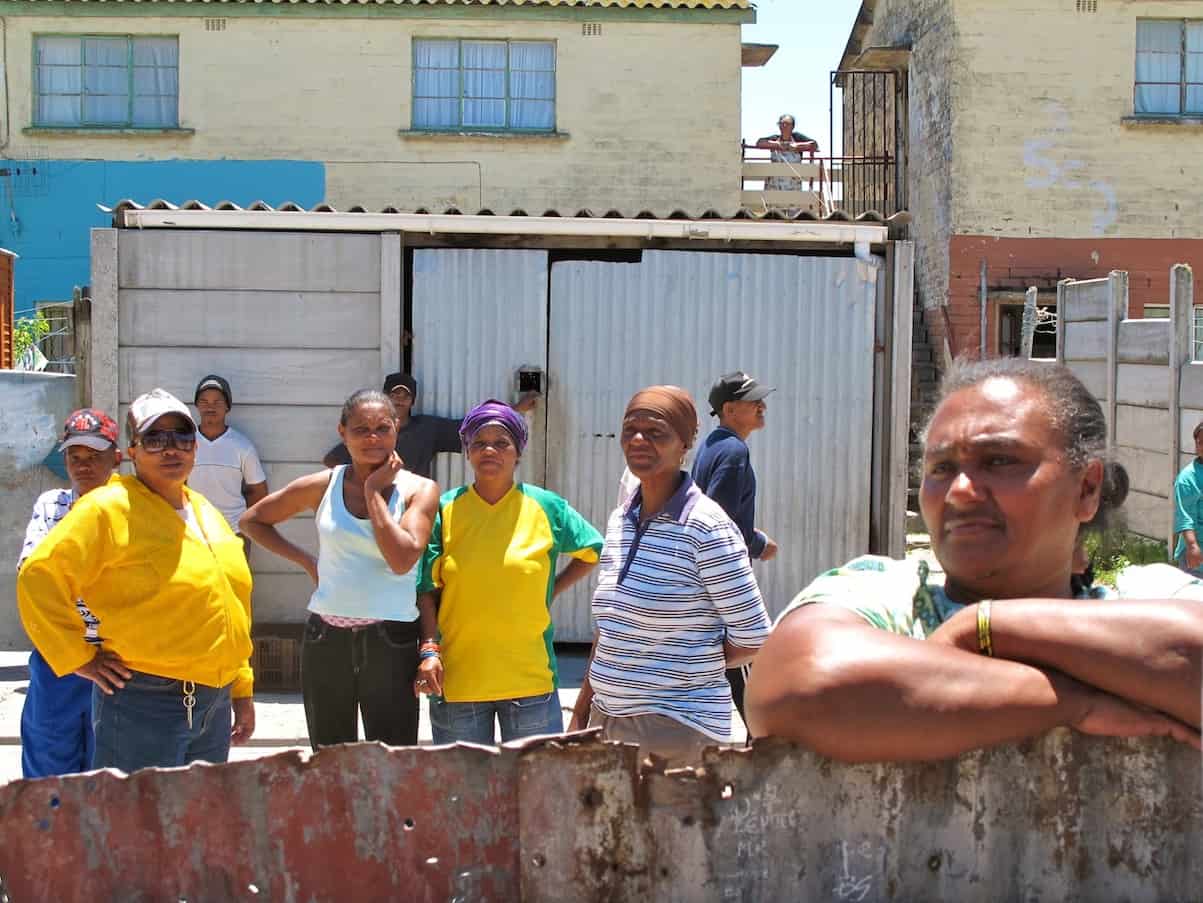 These are the words that epitomize the approach the Western Cape Backyarders Network (WCBN) has towards solving the problems that exist within backyarder communities in Cape Town. But how do you build momentum in a community that has had a history of fragmented approaches to solving its numerous problems?  The answer for Manenberg has been both simple in its execution and complex in the processes followed to get to where it is today.  Various community organisations at work in Manenberg met recently at the People’s Centre at a gathering organized by the WCBN in conjunction with the Informal Settlement Network (ISN) to review the work being done to improve the lives of backyarders in the area.

Patsy Daniels, chairperson of the Manenberg Development Coordinating Structure (MDCS) explained the history of community organization within Manenberg.  She described how organisations within Manenberg have been competing for funds, resources and exposure, which has seen a very disjointed approach to solving the area’s problems. The role of the MDCS was to provide a coordinated structure for organisations to work together and has provided the platform for the WCBN to start making a real impact on the lives of the backyard dwellers of Manenberg.

Melanie Manuel of the WCBN highlighted the plight of people living in backyard shacks across Cape Town and brought into sharp contrast the unique set of problems faced by slum dwellers who are effectively hidden from the public eye. She explained that with the help of the Community Organisation Resource Centre (CORC) and its links to Slum Dwellers International (SDI), the rituals of enumeration and savings were being utilized to begin an upgrading initiative with Manenberg backyarders as well as some of the most overcrowded rental stock houses in the area.  The plan of action did not end here, however, and the approach being followed by the organisations tasked with looking after the housing sector in Manenberg included a multi-facetted method, which would seek to draw in various other sections of the community.

Yulene Waldeck, a member of the WCBN and Manenberg Community Management Services (COMS), then took the gathering through the proposals for a multi-purpose centre, which would be located on a vacant piece of land.  The centre would provide accommodation for the elderly, drug abuse counseling facilities as well as skills training and support to young mothers who often lived in overcrowded conditions and had no place to go when facing the pressures of motherhood.  In addition, the centre would serve as offices for the organisations working with backyard dwellers and give the community a first port of call in addressing the complex issues around backyard living and informality.

Savings served as the entry point for the work of the Federation of the Urban Poor (FEDUP) in Manenberg.  Naeema Swartz of the Manenberg Slum Dwellers explained that even in a community like Manenberg where people are very poor, the need to save is very important.  She emphasized that the discipline of savings was key to help many backyard dwellers in the area upgrade and improve their current living conditions.  The principle here was to develop the ethos of self-reliance in addressing the concerns of their own community.  Gail Julius of the WCBN took the opportunity to highlight another of SDI’s key rituals, that being enumerations and explained how this tool served as an excellent mobilizing and learning tool for the community of Manenberg.  The enumeration helped the various role-players understand that overcrowding was one of the biggest concerns facing residents.  In one instance the enumeration team had encountered a home where 22 people were sharing a one-bedroom house.  The enumerations highlighted the difficulty backyarders had with regards to accessing basic services like sanitation, electricity and water.  They would often have to pay for access to these services from the tenants of the rental housing stock. This meant that if there were issues with the tenants the backyarders had no grounds for legal recourse as the City had agreements with the tenants and not with the backyarders, effectively leaving them in limbo.

Henrietta and Lezhaun, members of a family of ten living in an overcrowded one-bedroom house in Manenberg, explained that they have been on the waiting list since 1987.  Compounding their overcrowded circumstances was the additional fact that they are both blind.  This family in particular raised awareness around the plight of many families where 2nd to 3rd generation members, having no place to move to, simply stayed in overcrowded conditions.  In many cases, situations like these have led to the establishment of backyard accommodation which has been the only viable option for people who did not want to move out of Manenberg or lose the social security net that familial networks in the area provided.

Washiela Baker of the Caring Organization, who has been active in community work in Manenberg for over 25 years, stated that she was shocked at the findings of the enumeration.  Being able to go into the backyards and witness for herself the conditions people were living under galvanized her to focus more effort towards these people who were hidden from the public gaze.

The enumeration thus guided the community organisations in the housing sector of the MDCS towards an approach that would seek to upgrade the living conditions of backyard dwellers by improving the dilapidated make shift structures, which thousands of residents in Manenberg find themselves living in today.  A secondary proposal looked at the opportunities that existed in demolishing old rental stock houses and building structures that used the space more efficiently to house more people.  Melanie Manual explained how the space currently occupied by a five-unit structure could be utilized to build units for eight families and include a courtyard space for children to play in safety. 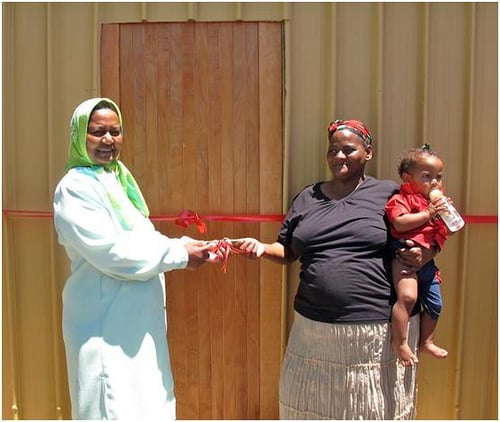 The main thrust of the gathering was to draw people’s attention to the dire conditions the backyarders found themselves in but at the same time highlight solutions which the community themselves could be involved in.  The gathering was invited to take a walk to the site of an upgraded shack in the Manenberg area.  Melanie explained that an agreement had been reached with the local government to allow for the upgrading of current structures as long as correct procedures were followed. Backyard shacks housing family of the tenants of council houses could be upgraded provided the tenants were in agreement.  This simple step towards an upgrading agenda will mean that thousands of backyarders in Manenberg will finally have the opportunity to live in structures that provide shelter from the harsh Cape Town elements.  The upgraded shack was built by an NGO called iKhayalami who specialize in affordable homes and alternative technologies for the urban poor.  As people gathered round the new structure a discernable buzz could be felt sweeping through the crowd.  Shouts of encouragement and praise rang out as Ms. Sandra Joubert was presented with the key to her new home.  To outsiders it would not seem like much, but for this resident of Manenberg who had spent many a winter battling flooding, a leaking roof and the bitter cold, it meant a home that gave her not only shelter but dignity.  As the guests who had been invited to view the shack dispersed, a crowd of local residents remained.  Their interest had been sparked and inquiries were being made as to how they could access this new kind of shack.

Since the unveiling, Ms. Joubert has had numerous visitors to her upgraded shack all wanting to know how they could get their own shacks upgraded.  The WCBN with the help of CORC, FEDUP, ISN and Ikhayalami had clearly struck a chord with the community and upgrading appears to be the more realistic and viable alternative to the never ending waiting list which seemed to offer no hope for the backyarders.

Organise As of 2017, the South African Federation of the Urban and Rural Poor (FEDUP)...