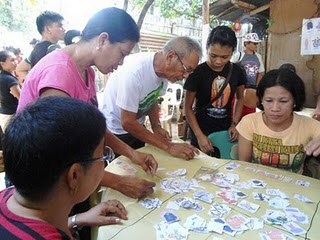 **Cross-posted from Homeless People’s Federation of the Philippines (HPFP) Blog**
ILOILO CITY– Social preparatory activities such as the Social Mapping and Dream House Workshop are among the capacity building activities supported by the Philippine Alliance to foster and promote community-led processes among partner communities in the country as a whole. New Baldoza Homeowners’ Association (NBHOA), one of the new community associations qualified to avail of the community-managed housing project implemented by the Philippine Alliance through the Community-led Infrastructure Finance Facility Program actively participated in the back to back training workshop facilitated by housing participants from Kabalaka and San Isidro housing project. The activity which was held last November 20, 2011 in Barangay Baldoza, Lapaz, Iloilo City, was attended by twenty (23) out of the twenty seven (27) applicants. 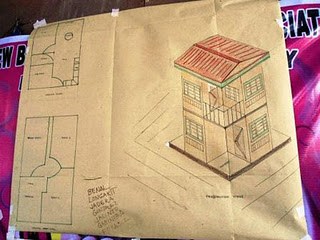 Social mapping during the morning session was conducted to map-out the socio-economic profile of the association members who are entitled to avail of a maximum loanable amount of one hundred fifty thousand pesos (P150, 000.00) and will serve as supplementary basis in validating the information given by the participants during their application and reconsideration of the loan package on the part of HPFPI-PACSII in Iloilo.

Dream house workshop on the other hand provides a venue for each participant to express their dream house through participative and illustrative schematic design making. Individual designs are then consolidated to integrate common spaces and essential design attributes by community architects and interns from the TAMPEI though three dimensional (3D) design models and prototypes.

Despite budget limitation, particularly on the capital fund for the construction materials as well as the participants expressed preference on replicating the house designs in San Isidro Relocation Site in Jaro instead, the Alliance considers it imperative to conduct separate dream house workshop for New Baldoza as it would facilitate social acceptability and pave the way in building a sense of ownership among association members. As a response and in consideration of the people’s inherent adaptive capacity, the alliance encourages incremental development as a strategy to bridge the gap resulting from the aforementioned budget limitation.

For the past years, since the beginning of its housing initiatives in 2007, the Philippine Alliance has been consistent on its stand that social preparatory activities such as social mapping and dream house workshop are fundamental components of a cohesive and responsive community development undertaking. Building capacities among housing participants is likewise a leap forward towards a holistic community-led process.
Philippines Profiling Enumeration And Mapping Slum Upgrading Women

By Rolando A. Tuazon and Theresa Carampatana Originally featured on the IIED blog:Â https://www.iied.org/community-led-covid-19-response-work-philippines-homeless-peoples-federation Based on...

From Purok to Barangay: Mapping Informality in Philippine Cities