The creation of a new Urban Poor Fund was the highlight of the event: The community contributed R12,000 in savings

The enduring nature and extent of homelessness and landlessness in post-apartheid South Africa has compelled new approaches to housing the urban poor. Informal settlement upgrading – an incremental approach to securing tenure and improving basic service delivery – has gained recognition at local and national levels. The central participation of shack dwellers in the planning and implementation of settlement upgrading is integral to the creation of sustainable human settlements and inclusive cities. The anticipation for ‘deepening democracy’ through governance reform and extensive participation is arguably precursory to the prospects of ameliorating the depressing living conditions of slum dwellers. There has possibly never been a greater need for establishing effective partnerships between civil society and the state capable to navigate the turmoil currents of the urban crisis. 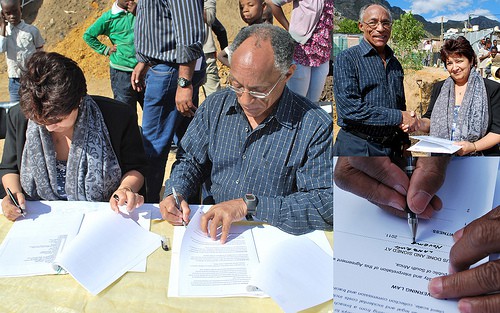 At a spirited event on 12th November in the informal settlement of Langrug on the outskirts of Franschhoek, the Executive Mayor, H.E. Mr. Conrad Sidego, said: “The benefits of this partnership are far-reaching and should be viewed as a paradigm shift in municipal governance.” This historical event was centred on the signing of a Memorandum of Understanding between the South African Alliance aligned to SDI and the Stellenbosch Municipality. The establishment of an Urban Poor Fund servicing informal settlements in the borders of the Stellenbosch Municipality concretised this pledge of partnership and renewal to “municipal governance”. Delegates from the Bill and Melinda Gates Foundation, the Swedish International Development Agency, the Governments of Norway and Uganda, and representatives from poor people’s federations in India, Namibia and Malawi were present. The Urban Poor Fund was financed by contributions by the Alliance and the municipality to the value of R3.5 million. Perhaps most significantly, R12,000 of hard-earned savings by the poor of the Stellenbosch region were also pledged.

In the first financial year, in addition to the capital and operational expenditure of community-initiated projects, the Fund will aim to “build an urban poor platform through a network of informal settlements and informal backyarders” by surveying, mapping and profiling settlements with the view of up-scaling upgrading across the municipality. Provisions are also made to invest in the social institutions of the poor in order to manage the partnership projects (e.g. setting up mini offices in five strategic clusters). Tiers of government and other interested parties to participate, especially role players in urban development, will also be engaged with the view of researching and designing “financial facility that incentivises community participation in informal settlement upgrading”.

Jockin Arputham, the president of SDI and of the National Slum Dwellers Federation of India, addressed the residents of informal settlements across the municipality: “If everyone depends on the waiting list, it might be 25 – 40 years. And then you won’t even get water or a toilet. I think that the Municipality of Stellenbosch has taken a lead, and they have come forward with a very, very big blessing that where ever you live, that is your land of ownership. If you have your land, you can improve your housing and living condition, which is designed by you. It is our pleasure to set up the urban development community fund where people will have access to the money and the work has to be done by you, the way you want it. Your frustration list is the waiting list.”

The Mayor added: “Today is about changing mindsets in providing housing … Just days ago we contemplated that we now have seven billion people on the planet and the challenges going with that … For us as the local government, we also need to understand and face the reality of what we need to do. If we continue with our old thinking, there is no way that we are going to change this.” 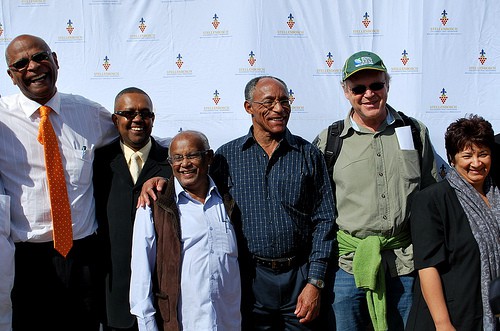