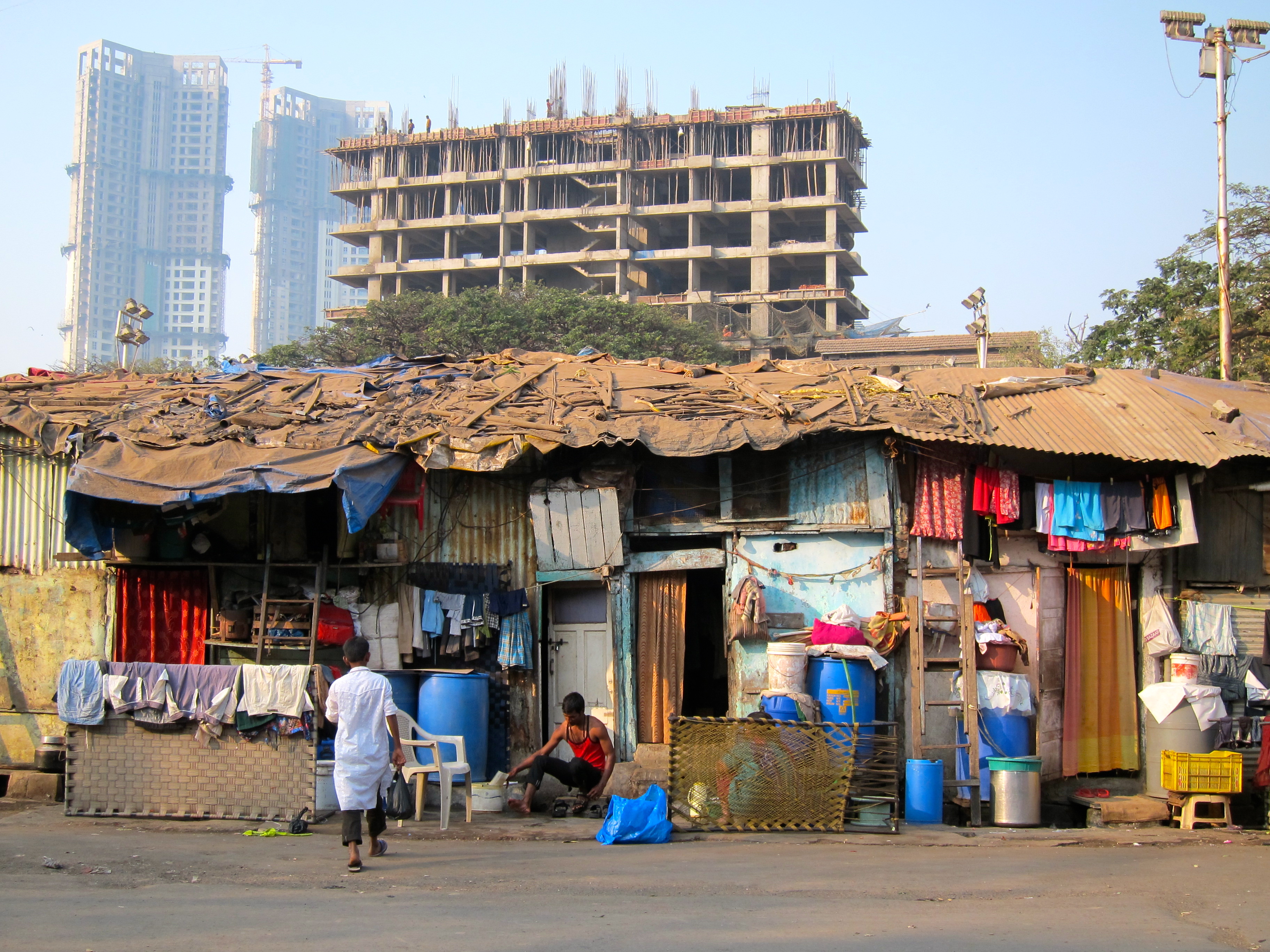 It is nearing the end of my stay in Mumbai, and I know I am going to miss this city as soon as I board the plane. I have spent the past week getting to know her streets and her people, and it is an experience I will certainly not forget. Mumbai is the kind of city that stays with you – the fragrance of the food, the colors of the sky at dusk, the buzz of people and traffic in the streets. Like other great cities of the world, its rhythm is invigorating and awe-inspiring – the vibrancy and speed of everyday life, set against the beautiful backdrop of history.

Over the past few days, I had the opportunity to revisit Dharavi: to walk the streets and narrow alleyways of the potters’ village and the recycling areas of the vast informal city-within-a-city, the world’s most well known slum.

We make our way from Bombay Central to Dharavi by train. It is past rush hour, so the great crowds I have heard so much about have subsided. The train is cool and quiet as it rumbles along the Central Line, and it is not long before we arrive at Sion station, the entrance to Dharavi. Actually, there is more than one train stop in Dharavi, making it very easy to access from almost anywhere across Mumbai. This, along with its central location, is one of the main factors contributing to increased interest in Dharavi as a site for private re-development. But re-development plans have not taken into account Dharavi’s place as a commercial hub in Mumbai’s informal and formal economies. They have not accounted for the outdoor kilns in the potters’ village, or the vast workshops where all means of recycling take place. Nor have they accounted for the long tradition of food production, leather shops, and textile mills. For now, plans are at a standstill. But there is a long road ahead if the vibrant economy of this bustling town is to be preserved. 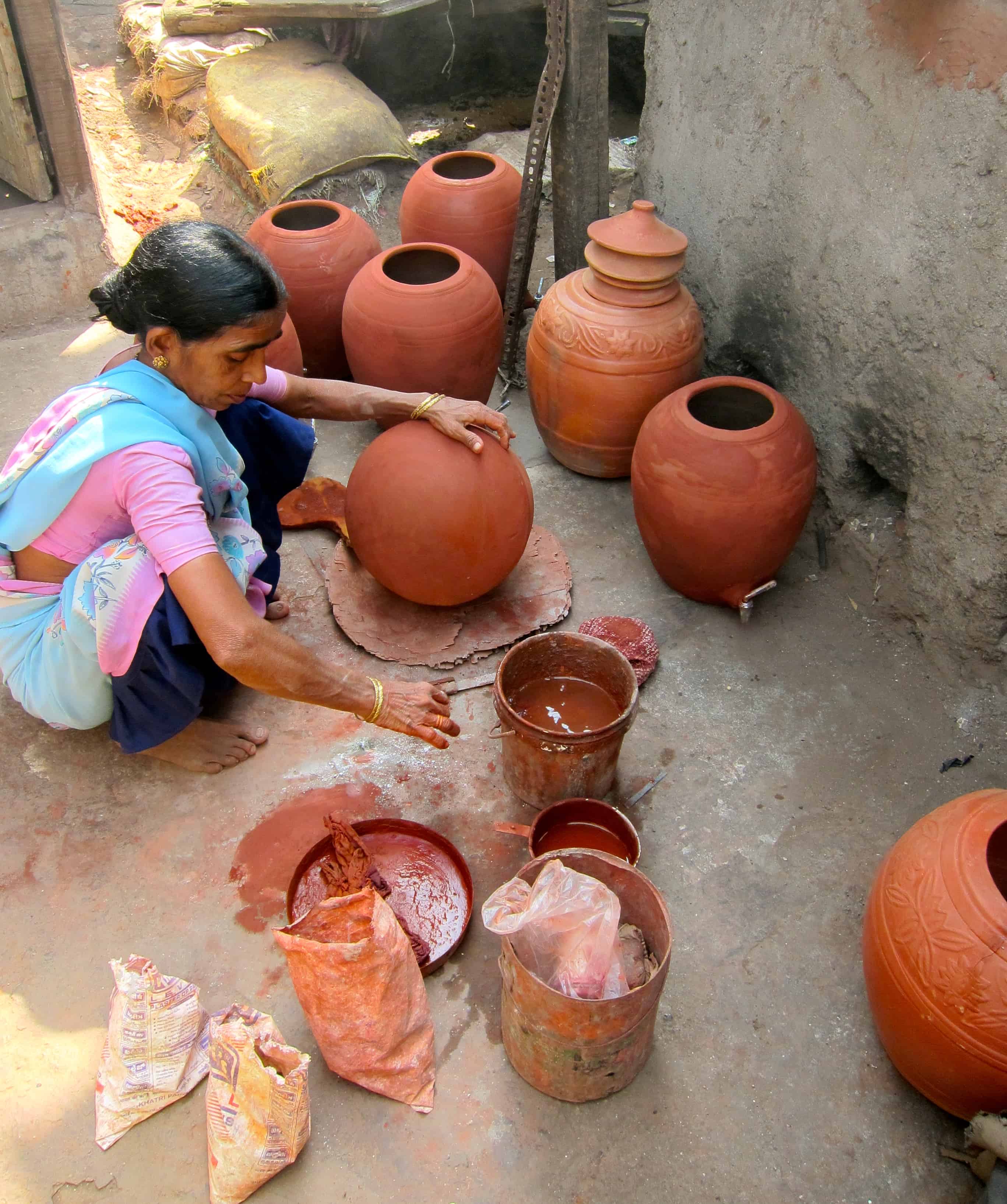 We start off in the potters’ village. Here, thousands of local people work with hundreds of pounds of clay every day, stamping, pounding, molding and spinning it into beautiful pots, urns, serving dishes, candle holders for Diwali and statues of the Indian god Ganesh. Orders come in from all over Mumbai. Pottery is sold to housewives and retailers. We walk for half an hour, past shops and workshops, each one with a home overhead. Men sit inside, spinning handmade pots on wheels. A woman is polishing water pots outside her home, rubbing wet clay onto just-fired pots to smooth over imperfections. There are hundreds of the same pots lined up a few feet away. I ask her how much these sell for. Sharmila, one of the women working at the Indian support NGO, SPARC, translates for me. “About 100 or 120 rupees,” she says. This is equivalent to about US $2. This isn’t much, of course. But it is US $2 more than nothing, and when you multiply it by the 50 or 100 pots beside her, it’s a significant income. Multiply that by the many other workshops around her, and it becomes clear that Dharavi is more than a small piece of Mumbai’s vibrant economy.

From here, Sharmila takes me to another area of winding streets, this time lined with one recycling workshop after another. I have heard about Dharavi’s recycling industry, but again it is something else to see it up close and personal. Each workshop is busy with men and women sorting through, cleaning and producing every type of plastic imaginable. Women sit outside in the alleyways sorting through plastic cutlery and take-away boxes, as men work away inside on melting and shredding them to be reused across India and beyond. Dharavi is home to the largest plastic recycling industry in India. If the proposed redevelopment took place, where would this industry move to? How could it not be accounted for? How could it be seen as anything less than integral to the very heart of the city’s economy?

The next day I visit the Mahila Milan-NSDF office in Byculla. This was the neighborhood where SPARC first began its work back in the 1980s, when they made links with the community of pavement-dwellers who had their homes along these streets. Today, the streets are still lined with homes and shops, people milling about, living and working in the heart of central Mumbai, just blocks away from Bombay Central train station. Again, I am struck by the presence of the informal right alongside the formal city. Not even alongside it, but smack in the middle of it. Part of it. Contributing to it. We spend some time speaking with the women of Mahila Milan living here. They have been members of MM for over twenty years. They have negotiated with local government for toilets, for water taps, for electricity. Now each home is hooked up to the electrical grid, they have access to community toilets, and many people have water taps inside their homes. And they have prevented demolitions, prevented the threat of middle-of-the-night bulldozers and unannounced evictions.

The women know they will not be able to stay in Byculla forever, but in many ways it is better than moving out to Mankhurd, further away from jobs and schools. They made their homes here on purpose, and although they know they will have to leave eventually, it becomes clear yet again that a home is so much than a formal house. It is a community, a sense of security, access to the services and opportunities that bring rich and poor alike to the cities of the world. Why then should the right to enjoy these be a privilege only afforded to the rich? In Mumbai, the poor have claimed their space in the city – their right to it. Now the question is how they will hold onto that, and how the rest of us will support them.

For more photos from Ariana’s trip to Mumbai, visit our Facebook page.