Uganda Loses USD $177m Annually Due to Poor Sanitation: What is the Federation Doing? 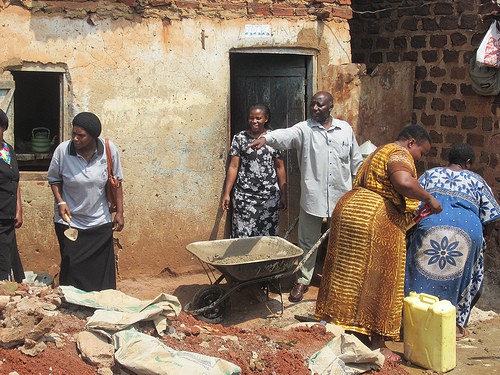 A World Bank report released this month estimates Uganda loses USD $177 million annually due to poor sanitation. According to the report, Economic Impacts of Poor Sanitation in Africa – Uganda, the majority of these costs come from the annual premature death of 23,000 Ugandans from diarrheal disease, including 19,700 children under the age of five. Nearly 90 percent of these deaths are directly attributable to poor water, sanitation, and hygiene. The study estimates 13.8 million Ugandans use unsanitary or shared latrines and 3.2 million have no latrine at all and defecate in the open.

The National Slum Dwellers Federation of Uganda is working to address the country’s sanitation crisis, which is experienced most severely by those living in the country’s crowded slums. Having already completed two sanitation units, one in Kisenyi – a slum in central Kampala – and one in Rubaga, a slum in Jinja, the federation is pushing to scale up its approach throughout the country. It has begun construction of a unit in Nakawa, Kampala and is about to commence construction of units in Mbale, Mbarara, and five other settlements in Jinja. The federation prioritizes settlements revealed by enumerations to be particularly underserved.

Federation-built sanitation units vary in size, depending on the amount of land the federation is able to secure through negotiations with landowners and municipal councils. Generally, however, the federation attempts to design units with at least 3 stances for males and 3 for females as well as bathing and disabled facilities. In addition to the sanitation services, a second floor is constructed for use as a community hall. This hall can be used for federation meetings, saving money on renting space, and also rented to others to generate income.

Project funds typically come from three sources: the first is community contribution. This contribution takes the form of financial capital (usually 20% of project costs in order to secure a loan) and also community labor and management. An additional contribution is sought from the municipal council in order to strengthen collective responsibility for sanitation and contribute towards the kind of institutional strengthening required to take the strategy to scale.  The final contribution comes from SDI’s Urban Poor Fund International (UPFI). This money comes to the federation as a loan at an interest rate of 8%.

In order to repay the UPFI loan the community has structured their sanitation units as income generating facilities. Community members pay a small user fee – typically much lower than that charged by similar facilities – and can rent out the community hall. The fees collected are used to maintain the facility and repay the loan. The federation conservatively expects to repay a loan of $25,000 within 6 years based on use projections for the toilet and bathing facilities.

During the construction phase the federation forms a Project Management Committee (PMC) headed by a PMC chairperson and PMC treasurer. The PMC has 4 sub-committees: Procurement committee; Finance Committee; Construction Committee and a Security and Store Committee.  These sub-committees are comprised of federation members, members of the local community that are not in the federation but may be central to the project – such as the landowner or market chairperson – and local authorities. The PMC receives training from other federation members in the SDI network and where necessary outside experts. A recent training held in Uganda, for instance, was conducted by the World Bank for the purpose of exposing the federation to procurement standards in the hope that the federation will be better equipped to participate in future large scale Bank projects.

Once construction is complete, the PMC changes. The project operations PMC is comprised of 2 caretakers to maintain the facilities to a high hygienic standard, 2 collectors responsible for day-to-day collection and banking of user fees, and federation Health and Hygiene representatives, a treasurer and project chairperson. All projects within the federation are overseen by regional leadership and the National Slum Dwellers Federation of Uganda’s National Executive Committee (NEC).

As the projects grow, so too will the number of Ugandans with access to adequate sanitation. The federation will continue to strengthen partnerships with outside actors and streamline its internal processes to make its approach more efficient and more scaleable. This is how the federation is working to reduce the incidence of premature death, preventable disease, and the wasted precious resources outlined in the Bank’s report.