The Brazilian Urban Context and SDI 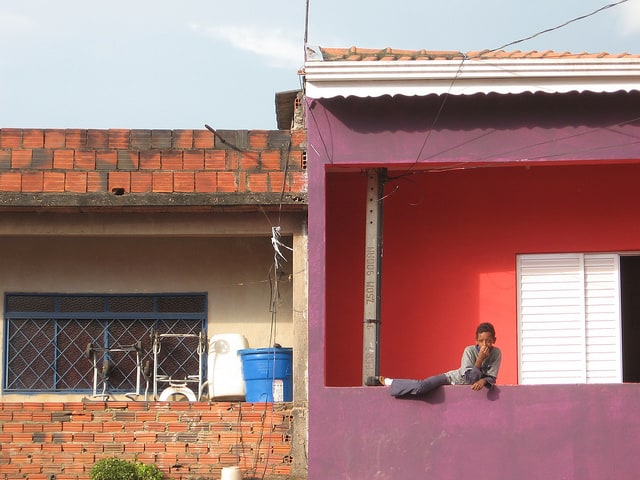 SDI started its activities in Brazil through the local NGO Interação simultaneously with the beginning of what can be proved to be the most significant transformation in urban and housing policies in the country. At the same time, the country initiated a journey of intensive economic growth with a social transformation process in course due to the impact of both: (i) intensive infrastructure investments, especially in “informal” settlements; and (ii) increase on income levels and decrease of poverty.

Interação was founded in the beginning of 2005 in a context of no resources for urban rehabilitation, but soon after, important progress took place in terms of legislation: the approval of the City Statute. By this time, a selected number of professionals and activists were aware of the importance of leverage for urban policies in Brazil and the need to make cities more inclusive, on the other hand, homeless social movements, born in the seventies during our military dictatorship in the southeast part of the country, were expanding to national level and struggling to institutionalize their “self-help mutual construction” programs successfully implemented in some cities of the country.

In this scenario, of having approved in 2001 the most progressive legislation in the world in terms of recognizing the right of the city for all with the creation of concrete legal, economic and planning tools to keep slum dwellers where they are living and create more room in urban centers for new low income housing development, the Ministry of Cities was created shortly before the foundation of Interação, in the year 2003.

The Ministry of Cities had two main challenges, despite its small size and technical capacity: (i) create a national level urban and housing policy; (ii) implement real programs in order to promote change in the urban context. However, because Brazil is a federal country, municipalities have been the real drivers of urban and housing policy since 1986 when the national level institution for housing (Brazilian Housing Bank – BNH) was extinguished, but in a very heterogeneous way, some of them being more aggressive and some of them lacking political and institutional capacity in the sector.

So, when Interação started in 2005, although the population had already started to improve its income, the “boom” came later and started to be publicly recognized by 2008/09 with all statistics screaming about the emerging of a “new middle class” and the decrease of poverty levels in the country: in the period 2004 – 2012 approximately 40 million people emerged from below the poverty line. On the other side, no strong urban and housing program was implemented yet by the recent created Ministry of Cities and the future scenario was not clear at all, would the federal government really invest in slum upgrading?

Basically in the settlements where Interação started to work in the surroundings of São Paulo, communities had being suffering with the lack of inclusive urban policies and a wrong approach of some municipal governments of creating “provisory” and unsustainable solutions (for example construction material and promoting the densification of new and existing slums). They were being bypassed by government, politicians and bad entrepreneurs, trust was not there and basically they were very closed for new opportunities. Overcoming this barrier was only possible with hard and intensive work of professionals and community leaders who believed in a different reality, SDI presence, through exchanges was very important to leverage some mobilization and open up the horizons of these frightened communities.

The barriers for Interação and the first engaged community leaders were immense, communities were targeted by politicians and social movements/organizations in a context of “competition” where one tried to push harder than the other to control the settlements and its residents. On the other hand labor market and access to credit was expanding (although still very expensive) so that individual interests were slowly overcoming collective approaches.

When the Growth Acceleration Program (PAC) was finally launched by the Ministry of Cities in 2006, and later on the subsidies program called “Minha Casa, Minha Vida” (MCMV) the situation became even more complex. The amount of investments on slum upgrading and infrasctruture is about US$ 250 billion for a 9 year period (06-14) and under MCMV access to about 3 million houses in total should be provided by 2014, which represented a major change of scale on addressing the slum and housing problems in Brazil. Communities supported by Interação also got their share on investments, with more than US$ 70 million of investments for infrastructure, housing and titling.

With the PAC, many strong construction companies moved their portfolio and started to gain expertise on slum rehabilitation and the private sector was also strongly attracted by social niche provided by the program, since 2,5% of infrastructure investments have to be directed to social support programs in slums.

Municipalities and state governments started than to launch biddings to hire construction companies and also “social work” companies to implement the social support for slum upgrading. Now, besides the usual politicians and social organizations, the social workers started to gain space in poor communities, bringing even more complexities for an already complex situation.

Brazil has now become a donor country, contributing to the reconstruction of Haiti and even to the current economic crisis in Europe. But where are the social movements and the federation in this scenario?

Until now the approach of SDI of promoting collective action and gather information and resources in the communities was crucial not just for the settlements where Interação and the Brazilian leaders were present and active, in Osasco, Várzea Paulista and Recife (besides others where footprints and seeds were left: Sorocaba, Santos, Novo Gama, São Paulo and Rio de Janeiro), but also for shaping the new national policy, in terms of reinforce the importance of community strengthening in the process of urban rehabilitation. It is important to highlight that the institutional partnership between SDI and the Ministry of Cities started in 2005, even before the launching of the relevant investment programs.

Some communities where SDI had strong influence, like Portais in Osasco, and Vila Real in Várzea Paulista reached high levels of improvement, with the implementation of full sanitation systems, streets, drainage, new houses and public services like schools, health units, and day care. The municipal policies certainly were influenced by SDI approach, with for instance the recognition of self enumerations as official data, even by the National Institute of Statistics. Residents from these areas also improved their personal lives, there are jobs available, children get education and there is even time and resources for leisure activities, such as vacation trips and others.

Other communities are still struggling to find their identities among these major transformations and the diversity and number of actors now involved in the “slum business”. Interação and SDI support some of these communities, but the strategies must be flexible and we must reinvent ourselves everyday.

The successful communities in Brazil planted the first seeds for Bolivia, a neighboring country with high levels of poverty and no urban policy, and more recently in Peru. The alliance with the Brazilian government has been important to influence local and national government and enable some changes, which might open new ways for the urban poor in the country.

At the current stage a group of community leaders from Osasco, Várzea Paulista and Recife are envisioning the consolidation of city level organizations, which might be the first step to build a national federation alone or in an alliance with existing federations. One important pillar is constituted by the lessons learned throughout several exchanges to and from Asia and African countries, but especially from the last joint visit with Bolivia to the Philippines. Although savings and loans are not the strongest side of Brazilian SDI groups, the understanding of the importance to leverage savings and loans in order to build trust and solidarity is gaining space, so as the notion of savings being the core of peoples mobilization which will be a paradigm shift on the historical social movements approach where hierarchical systems, massive mobilization and a strong influence from political parties were the main ingredients for their struggle.

The emergence of a federation of low income communities in a context of significant social and economic transformation and with a different culture of mobilization and powerful stakeholders (governments, private sector, national level social movements) has absurd challenges, but even if those strong will leaders never succeed on building a national level federation they will leave behind footprints in a history that is right now changing the life of the urban poor in Brazil and maybe in the rest of the developing world.