In Nairobi, Mobilising Against Evictions in the Ongoing Struggle for Land 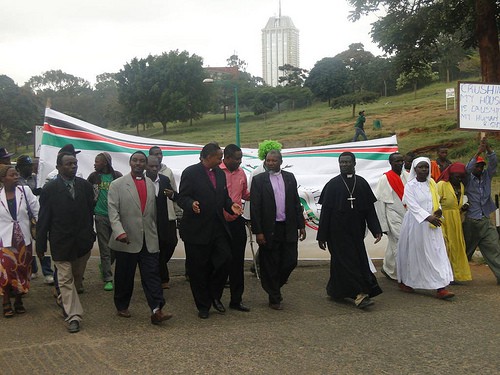 By Nysanani Mbaka, MuST Kenya

Mukuru – we will not budge

On Wednesday 12 September hundreds of city dwellers from the Mukuru belt, including Mukuru Kwa Reuben, Mukuru Kwa Njenga and Maendeleo settlements, converged at Nairobi’s Uhuru Park I. The agenda was a simple but powerful one: mobilising those affected by rampant land grabbing, poor service delivery, insecure tenure, and inhumane evictions, which contravenes Kenya’s new constitution.

The Kenyan slum dwellers federation, Muungano wa Wanavijiji, coordinated this march of solidarity, bringing together a constituency of organised communities, pastors, legal experts, small scale traders and supporters of this quest. After more than three months of intensive mobilisation, mass general meetings, and administrative and logistical preparation, residents arrived en mass at the Uhuru Park where they would later march to the Milimani Law Courts to lay a claim on some of the lands within the Mukuru belt that are currently in the hands of corrupt business people and well-connected political figures. 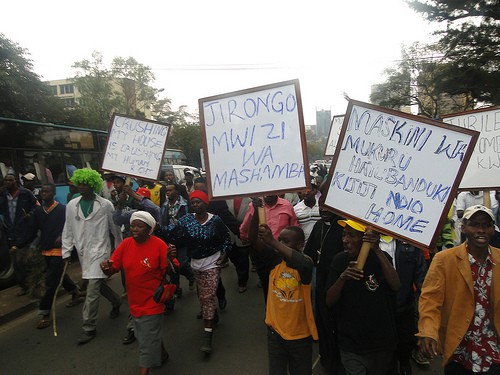 The march was catalysed by the recent forced evictions of informal dwellers living in the industrial zone of Mukuru Kwa Reuben and Mukuru Kwa Njenga. The Mukuru settlement community lodged an immediate interdict against Kenya’s Former President Daniel Arap Moi, Subsequent Commissioners of Land during Moi’s tenure, an aspiring Presidential Candidate in the upcoming 2013 General elections, just to name but a few. The slum dwellers were represented in court by a team of lawyers associated by The Katiba Institute. This case, which is serves as an example of all past evils committed against slum dwellers by the wealthy and mighty, informs a more direct agenda for holding government to account.

Communities in Nairobi City have been taking the initiatives to dialogue with local and central governments for more than a decade now. Government has not been entirely responsive to any of these initiatives. 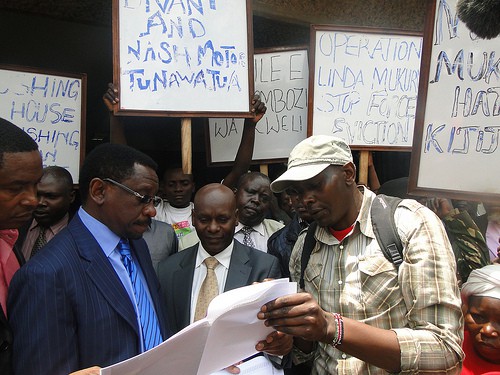 Kenya’s Minister of Lands, James Orengo said he was not aware of the land grabbing cartel in his Ministry, but will take time to act on some of the petitions and synthesized reports highlighting some of the culprits involved in “auctioning of the slum dwellers”, but that it will take time to investigate and report his findings to the Mukuru dwellers. He also reiterated that the community is exercising its right within the constitution to seek justice over the land issue.

Leading the memorable peaceful demonstrations were Joseph Muturi, Ben Osumba and Evans “Papa” Omondi of Mukuru settlement, all members of Muungano wa Wanavijiji. Papa said of the demonstrations, “We are here to support and protect our people from forced evictions engineered by selfish personalities who practice forced evictions without caring about the future of the urban poor.”

“We don’t want people to be homeless, in fact we demand security of tenure which we also hope the government is ready to negotiate for. Thereafter we demand housing for all, said Joseph Muturi.

The peaceful march was indeed a success and Muungano wa Wanavijiji proved their point. The matter is currently before court and the federation will respect the outcome of the court process.