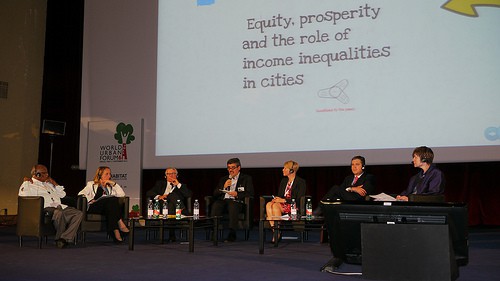 A large team from SDI attended the World Urban Forum in Naples, Italy in the first week of September. The delegation from India included Celine d’Cruz (SPARC/SDI), Jockin Arputham, John Samuel (NSDF), Parveen and Savita (Mahila Milan). There were leaders from several other countries from Asia and Africa in the delegation as well.

SDI had many events which were held at their exhibition stand, and participated in several networking sessions in which they showcased the work of SDI and its affiliates. In addition, many SDI representatives participated in the events of UN-Habitat in the official program as well as networking programs of other organizations. Over the weeks since WUF, various members have begun to report their reflections on their presentations, views and activities.

Jockin at the Panel of “What Needs to Change?”

In one of the main Dialogue Events, the question asked to all panelists was, “What can you needs to change to make cities work for all?”

Jockin challenged the person who asked the question and also the audience saying: “Since 1975 when this discussion began in the first UN Habitat event in Vancouver, what have we all done since then to make what we discuss actualize in practice? We keep coming to these events, and we ask each other these questions, and then we go away only to ask the same questions again.” 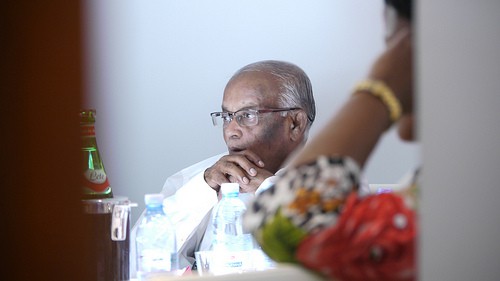 Jockin on a Networking Panel on Challenges of Sanitation

In a networking event on sanitation, Jockin challenges all the others in the panel and audience: “Have you constructed even one toilet – in someone’s home, or a toilet shared by several families, or a community toilet in a slum?”

His perspective was that the actual DOING demonstrates the real challenges that stop universal sanitation from taking place.

Of all the MDGs that are critical for the urban poor, this one is very tough because it’s the lack of practice and learning and evolving solutions that has stagnated this development investment – not money, not technology and policy.