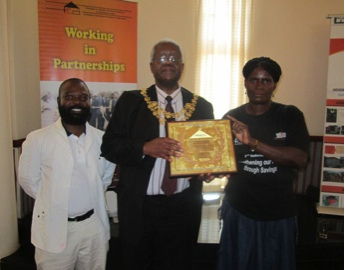 By the Zimbabwe Homeless People’s Federation & Dialogue on Shelter

Unlike the previous global urban meetings, WUF6 will be remembered with a difference by the Zimbabweans. At this year’s World Urban Forum, the Mayor of Harare was awarded the UN Habitat Scroll of Honour – a prestigious global recognition given to an individual or organization for outstanding contribution to human settlements. The award is an acknowledgement of the role that Mayor Masunda has played in the local government sphere in general. In particular, the award recognizes the work done in partnership with the alliance of the Zimbabwe Homeless People’s Federation and its technical partner Dialogue on Shelter under the Bill and Melinda Gates Foundation-funded Harare Slum Upgrading Project.

Today, the Harare Mayor invited the slum dwellers to his official residence in Harare to join him in celebrating this prestigious award. Mayor Masunda noted how the relationship with the alliance of the Federation and Dialogue has assisted the City of Harare to accomplish work that ordinarily would have been impossible without this partnership arrangement. The Federation’s power to organize and engage on critical developmental issues was one asset that the City had benefited from in dealing with the alliance. The Mayor explained how the partnership with the alliance, through the Memorandum of Understanding (MOU), has managed to create opportunities for leveraging resources to support slum upgrading. The slum upgrading project in Dzivarasekwa Extension was pointed out as a unique pilot that has put Harare on the global human settlements map. In particular, new innovations around achieving densification, affordability and the testing of alternative infrastructure technologies under the project were cited as the key aspects of the project that have helped to build a strong case for Harare as a model.

Through slum upgrading, the Mayor of Harare and indeed the entire City of Harare was demonstrating that engaging the urban poor through meaningful partnerships remains a sustainable solution to informality instead of confronting slums using bulldozers. It is thus through championing these new shifts in urban development practice that work by Mayor Masunda has not only put Harare on the map but also Zimbabwe in general. It is a reflection of the fact that the slum agenda has now become the city agenda. For Harare, therefore the slum issue is no longer an imaginary problem that the city can insulate itself from but rather a challenge that should be acknowledged and addressed through constructive engagement with the urban poor.