Pineapple Studios: SDI at 2012 AAPS All Schools Conference in Nairobi 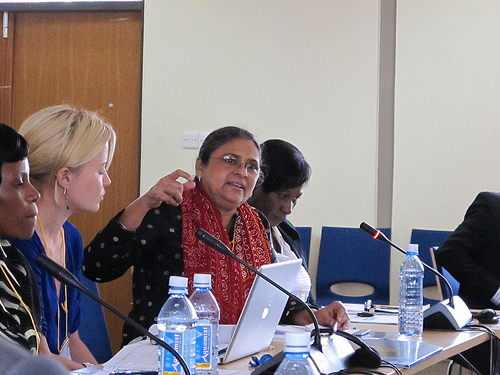 There were a number of comments from professors at the AAPS Conference in Nairobi (October 16-18) about the name that should be given to Urban Studios. Should they be called practical planning studios? Reality studios? How can they be distinguished from the studios to which planners are accustomed? For SDI, as one programme officer pointed out, “they could be called pineapples for all we care, as long as they do the work and have productive outcomes.”

This reality check was, in many ways, the reason SDI was invited to this gathering of planning professors from across Africa. A partnership between AAPS and SDI is working to make planning more responsive to the realities of life in developing cities by bringing planning students into partnership with slum dweller federations in SDI’s network.

Sheela Patel, one of the founders of SDI and chair of the organization’s board, gave the keynote address, which undoubtedly ruffled the feathers of a few professors who questioned the focus on slums, informality, and even the urban sector.

Sheela didn’t sugar coat her relationship to planners either. “I used to love to hate planners”, she said. As the years passed, however, she came to realize it is necessary to examine the reasons why planners were not serving the needs of the urban poor and work to change it.  She said her blood would boil as a young professional when she would be forced to sit across from a planner who ordered eviction after eviction, but she focused on finding the cracks and the loopholes, that would enable a critical mass of urban residents to generate solutions. For the critical mass, finding solutions was easy. The city could not plan for what it did not know.

She urged participants to work toward disconnecting planning from 19th century principles and recognize that planning is deeply political. Despite endless platitudes to the urban poor, she argued, the judiciary continues to uphold deeply exclusionary urban planning systems. This, she warned, could have terrible consequences for the cities of the developing world where she doubts young, impatient, and aspirational populations will not be prepared to wait for years for their cities to recognize them. She said the time has come for African planners to move away from Eurocentric models and generate their own.

AAPS is deeply cognizant of this need and the conference highlighted the urban pineapples conducted by SDI affiliates and AAPS member schools. The studios highlighted were conducted in Uganda and Malawi and the Kenya federation shared its experience working with students. The presentations highlighted the benefit to students and communities through such partnerships. The sense that the university is an ivory tower with little to no relevance to the urban poor was turned on its head. Each studio aimed to infuse Africa’s future planners with the knowledge that planning developing cities simply cannot ignore the reality of life in the informal settlements where the bulk of the urban population resides. As student Sam Nuwagira, a studio participant from Uganda, remarked, “As planners we are taught that we are gods. The studio helped me to see that the gods are the community as they have the knowledge about their areas.”

This point was reinforced by federation member and “community professor” Katana Goretti, “In communities we know the number of settlements, services and origins of the people. We know how they spend their money and how they would like to develop their areas. You cannot plan from the office but if you go to the ground and speak to people and learn from them it can help you plan better.” As part of the urban studio in Uganda, Katana delivered lectures at Makerere University, took students on transect walks through Uganda’s slums, and helped student planners understand the necessity of planning with communities.

Critically, the studio work will need to impact upon the planning curriculum. There was much discussion about how this might be possible and also much concern about the bureaucratic barriers within universities. This discussion will continue within the AAPS community. Many professors present expressed interest in conducting similar studio to the ones conducted with SDI and countries such as Nigeria, Mozambique, and Rwanda expressed interest in starting SDI affiliate federations.

For SDI the vision is to see organized communities become the drivers of pragmatic and inclusive urban planning. Building partnerships with actors typically charged with urban planning – such as municipal and city councils, urban ministries, and academic institutions – is seen as the most viable strategy for incrementally generating systemic changes to the practice of urban planning. Critically, partnerships – like pineapples – can look good from the outside, but be brown, mushy, and useless at the center. True partnerships involve negotiation and engagement between equals. Community professors still face challenges being perceived as such, but SDI believes it’s headed in the right direction.

**This article originally appeared on TheCityFix, produced by WRI** By Alex Rogala From evictions and...