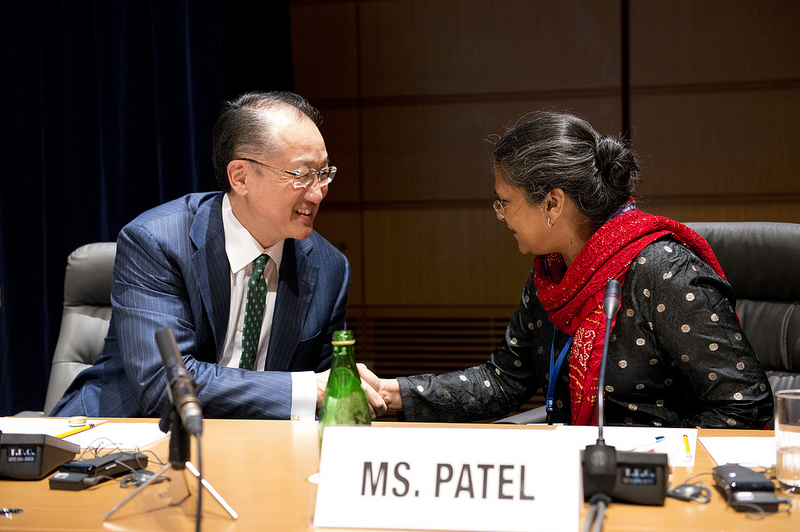 On the global stage SDI works to create a voice for the urban poor. Key global events provide a platform for SDI Slum Dwellers and co-ordinators to stress the importance of inclusive and pro-poor approaches to development. This political aspect of SDI’s work is a vital cog that calls into question top down institutional arrangement and actively promotes a more people centered form of development. Sheela Patel the SDI Chair recently participated in the “The Civic Society Townhall” event, hosted by the World Bank and IMF.

Ms. Patel spoke first and noted that poor-peoples movements around the world have gained prominence and autonomy and called for their voices to be heard by the Bank (see video below from 4:40-8:40). She also raised the issues of urban poverty and needs of the urban poor and how they need to be contemplated in the post-MDGs agenda. Mr. Kim spoke next and noted that this is his first Townhall as Bank President and feels quite at home since he comes from the civil society sector having helped create an NGO, Partners in Health, which promotes global health. He stated that among his goals, as Bank President will be to improve results and scale up operational collaboration with CSOs. Sheela’s speech is transcribed below.

In many ways, I think I represent those networks of people who feel disenfranchised in today’s world, who have begun to see that there is value in creating organizations and networks that not only seek to make their cities or their governments accountable to them, but seek both voice and agency from institutions like yours. As an organization that is committed through your commitment to end poverty, I believe that there is a vacuum in today’s international discussion about the voices of these constituencies.

You mentioned taking up the possibility of looking at voices of the poor. That process was many years ago. There are now powerful leaders in different constituencies representing different marginalized and disenfranchised people who want to come and make their own representation. I would encourage you to tell us that that possibility is imminent and that within these structures that exist within the bureaucracies that exist, there can be space for those voices, because they will come with solutions. They are powerful forces with energy that want to participate in shaping this new world and I think you need to explore ways by which the bureaucracy that you head has time, space, and the capacity to listen to them.

My second major concern is that we are all going to be involved in a debate of what happens after 2015. When we started discussing the MDGs, the world had not yet become mainly urban. The urban world and the kind of poverty that you will see in the urban environment has different characteristics, different difficulties, different levels that constitute poverty. We need new voices, new visions, and new knowledge to address this process.

Also, cities and urban areas are places where the market does play a critical role, and we have very few governance mechanisms that deal with this. It would be very useful for us to hear from you that, as part of the global architecture that is seeking governance, how are we going to arbitrate the crisis that is coming up in urban areas where you see extreme poverty and amazing wealth.

See below for a video of the full session.