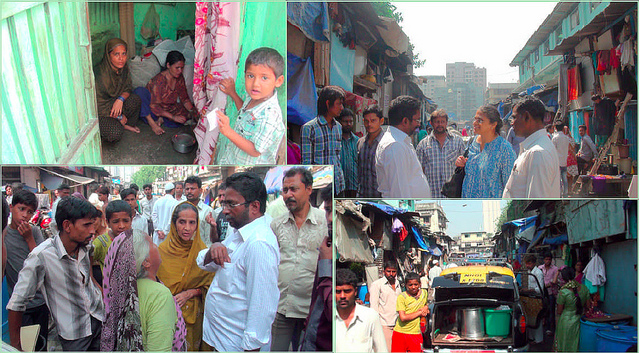 This document is the first entry in a diary of events that unfolded in the first week of November 2012 when several breakthroughs in negotiations between Milan Nagar, a cooperative of 536 pavement dwelling households formed in 1986, and the City of Mumbai allowed for the rebuilding of a partnership between the two stakeholders and an agreement that all Milan Nagar members would be housed in tenement housing through a relocation and rehabilitation process facilitated by the Indian SDI Alliance of SPARC, Mahila Milan and NSDF.

This diary will tell the story of the events and experiences that make up this process. They may not be in a chronological order but will serve as an attempt to document the communications, visuals that the process on the ground in Mumbai.

Negotiating for a Swap

A number of months ago, pavement dwellers reported that people were illegally occupying tenement homes constructed by the MMRDA and BMC for pavement dwellers from across Mumbai. Of course, this created a problem for the families intended for the allotted housing. When this information was presented to the Mumbai Municipality, discussions began as to how to move the “ghuskhors” (squatters) from the tenements so that pavement dwellers could move in. What emerged from this discussion was the realization that unless the entitled households from the pavements were properly identified, empty houses would continue to be invaded in this manner, as the authorities would have virtually no way of knowing the identities of the entitled households.

It was at this point that Jockin Arputham, president of the National Slum Dweller Federation of India, suggested that the pavement dwellers who were meant to move to the land at Milan Nagar, but have not been able to due to complications there, be able to occupy the tenement homes currently occupied by the “ghuskhors.” In exchange, pavement dwellers from other parts of the city will be able to occupy the housing at Milan Nagar once it is completed. This was accepted as a logical and feasible solution.

After getting the support of the municipality and police commissioner, the plan was finalized. The municipality gave a list of the “ghuskhors” to the police, who then removed them from the tenements and remained on the site for several days. In the meantime, Mahila Milan prepared the list of entitled pavement dwellers, as well as all the necessary documentation to make the allotments and undertake the relocation as soon as the “ghuskhors” were removed.

On 5 November documentation of 70 households living on Water Street in Byculla began. Videos of each street were made, photos of every household taken, and all documentation prepared. The households participated with local leaders in the assignment of housing allotments. On 6 November the “ghuskhors” were removed and on the 7th one person from each allotted household spent the night in their new home. At this point, the NSDF team made sure every house had a functioning fan and light after the previous residents moved out. The next day, on 8 November, the first 70 households began packing and were given transportation to move to their new homes. On 9 November the families broke down their huts on Water Street and the next street will begin the enumeration process, get their allotted home and begin to plan their journey.