“Learning From Those Who Have Walked the Path”: Sharing Learning from the 5 Cities Programme 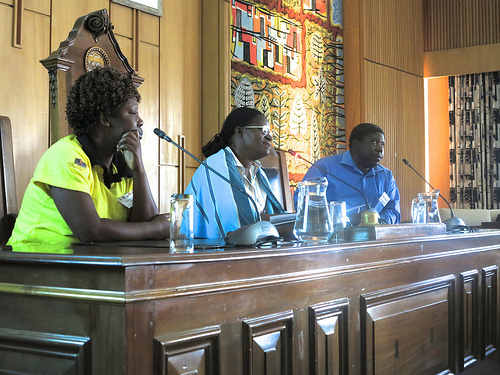 Community members and government partner from Harare, Zimbabwe talk about their experiences with the 5 Cities Programme.

Following the first two days of site visits and walkabouts in Mtshini Wam and Langrug, the final day of the 5 Cities Seminar consisted of country and municipality presentations and discussion in the City of Cape Town government building located in the heart of the city.  Unlike the first days’, which focused on sharing the Cape Town partnership, projects and overall experience, the final day’s schedule was dedicated to learning from the other 5 Cities around Africa.

After brief opening remarks from Cape Town Mayoral Committee Member for Utility Services Shehaam Sims thanking all the delegates for the participation in this conference, the delegation from Ghana was given the floor.  Through the 5 Cities Programme, the collaboration with the municipality of Ashaiman and the Ghana Homeless People’s Federation has made significant strides in terms of innovation around sanitation. Based on a common goal of providing toilets and waste management services to slums in Ashaiman, an area included in the Greater Accra region, the municipality and communities have come together address this community priority. As stated by the government official, Mr Anass Atchulo, this partnership has led to some significant changes in policy, with the creation of an informal settlement-upgrading department in the city of Accra is underway. Adding to Mr Atchulo’s words, Mrs Janet Abu, a community leader from Old Fadama settlement in Accra, mentioned the importance of community’s involvement, stating that without their initiative and work none of these projects could be realised.

Following Ghana’s presentation, Mr Costly Chanza from the Blantyre City Council, shared the challenges and successes experienced during the formation of a partnership between the Municipality of Blantyre and the Malawi Homeless People’s Federation. Proving that all slums are decidedly unique, the slums of Malawi are rather peri-urban, with low densities and characteristics reminiscent of a rural villages. As it was explained by Mr Partick Chikoti, a member of the supporting NGO in Malawi, “We cannot plan like the communities of Langrug or Mtshini Wam because the nature of our slums are completely different [with structures made out of home-made brick and cement]… so we find our own way of planning.” This is where the City comes in, sharing their technical support and advice to help the community implement projects such as sanitation units and drains. Similar to Ghana, the outcomes of this collaborative work has led to both the communities and city planners advocating for the creation of a human settlements planning section of the municipality to further meet the needs of the slums in Blantyre.

Continuing to share other experiences, the Zimbabwean delegation highlighted crucial lessons learned through the 5 Cities programme and the realities of creating partnerships. Through the partnership between the city council of Harare and slum dweller communities, the weight of responsibilities the city is faced with in terms of providing for its people has been lifted with the help of community-run initiatives. Mr James Chiyangwa from the city council of Harare shared that the communities “provide back-up systems of services that the city has failed to provide [to slum communities].” In turn, the city provides technical assistance, equipment, and advice to the communities in terms of planning. This collaboration has led to crucial changes in policy, including incremental buildin, which have been adopted as city policy, and the creation of a finance facility for the funding of slum upgrading to which both the governments and communities contribute. Drastically changing the mind-set of the government of Harare from the pervious belief that slums did not exist in Zimbabwe to beginning to recognize the existence of these settlements and finally to creating a working relationship between these two parties, this partnership allows these previously unseen informal settlements to take an active role in improving their living conditions and participating in local governance. As Mrs Sekai Catherine Chiremba, a federation member from Zimbabwe, summed it up, “we are planning with them, not them planning for us.”

The Uganda delegation finished the round of presentations adding their striking work in sanitation, water and waste management in multiple settlements in Kampala and across Uganda. With projects focusing on these central issues facing slum communities (along with the collaborative work between the community and the city), the KCC (Kampala City Council) has asked the National Slum Dwellers Federation in Uganda to submit a proposal of how the city can scale up current community-run sanitation and solid waste programmes. This achievement, along with the joint-work teams made up of the community members and city planners, has graduated the federation of Uganda to “a key ally [of the KCC] in terms of the processes geared towards improving the living conditions of slum communities,” (Mrs Sara Nandudu, federation member). This status has also been replicated in other municipalities where the federation and communities have begun partnerships with local governments. 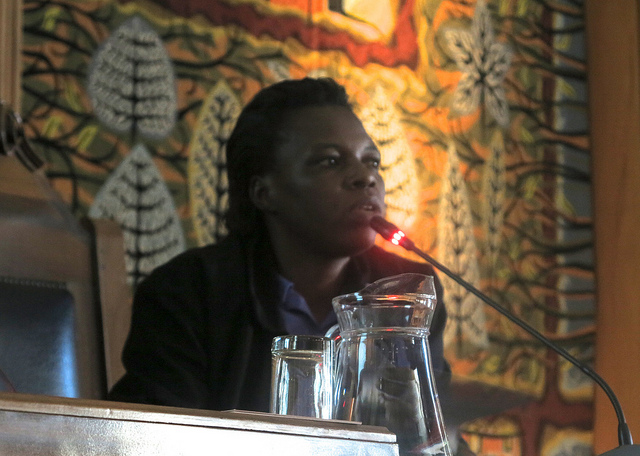 Sara Nandudu of the National Slum Dweller Federation of Uganda.

Although there are notable achievements that have been realised through these partnerships, it would be unrealistic to omit the challenges. All the delegations (including those from Cape Town and other South African cities) mentioned similar challenges, including:

As Mrs Melanie Manuel summarised it − using a metaphor coined by Ms Rose Molokoane comparing these partnerships to marriages, “husbands and wives always fight…like we do in our partnerships… [Now we must think of] how do we enhance our partnership? How can we make this marriage work?”

It was agreed that the best way to answer these questions is through trust. Borrowing the phrase of Mr Chinyangwa of Zimbabwe, “without trust you cannot move forward.” Both municipalities and communities must learn to trust each other through these relationships. However, for this to be successful it is essential that these partnerships be inclusive, where slum dwellers are involved from the planning stages through implementation and finally into evaluation. Without community participation throughout the process the work is not sustainable. As Patrick Magebhula said, it is essential to have “community involvement, not just leadership…this is what is needed in order for projects to succeed.”

Following the presentations of the visiting countries, the podium was opened for the representatives of municipalities outside of Cape Town, including the city of Johannesburg, Buffallo City and Nelson Mandela Bay Metro.

These presentations included little mention of current or future community participation or partnerships. Programmes already in place in many of these cities demonstrated a separation between communities and their governments, treating the slum dwellers as solely beneficiaries rather than key partners in upgrading initiatives. When questioned about this fragmentation, some of the municipalities mentioned their perception that the informal communities are disorganised, making it hard to work with them and appealed to ISN and CORC to help these communities mobilise. 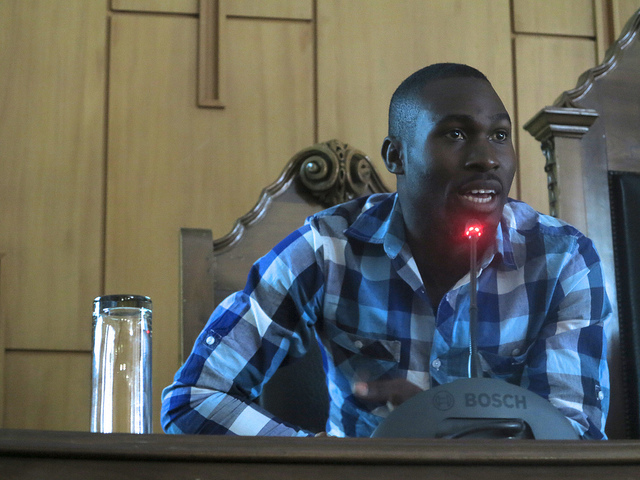 In concluding the conference, Ms Rose Molokoane posed a final question to the municipalities: “What are the critical issues that we would like to do with communities?” This brought up the topic of sharing between municipalities. Mr Lutwama Muhammed, from the support NGO in Uganda, shared that the municipalities’ presentations talked “more about what they are doing in terms of projects rather than describing how they learn from one another.” The invitation to these South African cities was extended in order to encourage learning and spark future plans for exchange visits and learning workshops. Ms Molokoane extended this invitation further by sharing a vision of these five cities (Buffallo City, Johannesburg, Nelson Mandela Bay Metro, Cape Town and Stellenbosch) becoming the examples of a national level 5 Cities programme for South Africa.

The ending reflection brought up key points to address upon delegates’ return to their own cities and to discuss in future 5 Cities seminars. These subjects included:

Ms Molokoane tied off the three-day 5 Cities Seminar with these final words, “Let’s not only look at building projects, but building ourselves, taking care of ourselves, and making our lives better.”

Tackling the Challenge of Sanitation in South ...

Cross posted from the SA SDI Alliance website By Ava Rose Hoffman (on behalf of...

**Cross posted from SA SDI Alliance Blog** By Walter Fieuw (on behalf of CORC) To the casual observer, a road is simply a tarmac to allow for different usages. Perhaps...

Partnering with the City of Cape Town in Mtshini Wam: Day 2 of the 5 Cities ...

Community members showcase model homes in Mtshini Wam.  By Ariana K. MacPherson, SDI Secretariat  The second day of the 5 Cities Seminar kicked off in Mtshini Wam, a settlement of...