The Real Crime Problem Lies in the Formal World 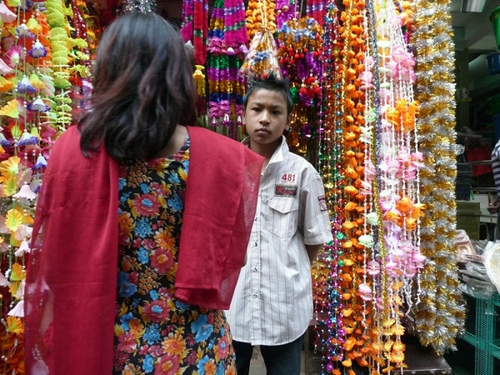 Fears about how slums harbor thieves and criminals reflect the fact that we are looking only at the bottom of the food chain of illegality. Photo credit: Cheryl Marland via Flickr Creative Commons

By Sheela Patel, Chair of SDI Board

In a guest blog post, Sheela Patel, advocate for the urban poor, argues that if illegal activity is a problem in informal settlements and economies, it’s nothing compared to the rampant crime in the formal world. You can read a different perspective on this issue by clicking here.

As a person working on redefining inclusivity in city governance, I am often challenged by the people who have argued, well and based on evidence, that informality is a menace to a city’s development. And maybe when challenged by it — especially when the face of informality is violent, abusive and confrontational — there is a legitimate case to be made for using police and judicial systems to subdue, contain, or manage it. The challenge we face is to examine where cities will be in the future if this is the only method used to deal with informality.

In many Asian and African countries, urbanization is clearly speeding ahead, and conventional regulatory frameworks that plan cities have clearly not been able to adapt to the global trends and local reality in which more poor, unskilled migrants are coming to cities. With no assets or skill sets, and kinship networks in the same situation as they are, they add to the city’s informality of work and habitat. Most of those in informal livelihoods serve the formal city in ways that we don’t acknowledge. Very few economists have sought to calculate how much they subsidize the lives of those who live and work in the formal institutions.

Traditional markets and vendors who brought goods to one’s doorstep have historically been part of the city. Only now, their numbers are expanding exponentially, and unlike in the past when they melted into invisibility, they are in your face, seeking to live and work in and around the formal city streets and near our homes. Today the vendor and hawker pays the equivalent of thrice what a licensed vendor pays to bribe police and municipal workers; similarly, slum dwellers end up paying for stolen water and electricity – resources that are often stolen by the utilities’ own staff, local politicians and illegal entrepreneurs, and then sold at three to four times their original cost to the slum dweller or vendor. 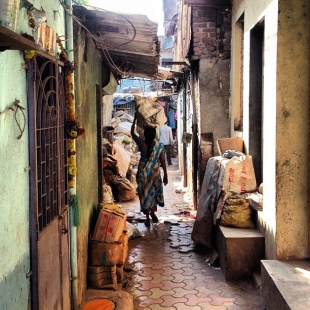 A woman in Dharavi, Mumbai. Slum dwellers end up paying for stolen water and electricity – resources that are often stolen by the utilities’ own staff, local politicians and illegal entrepreneurs. Photo credit: ToGa Wanderings via Flickr Creative Commons

In the face of industrial and manufacturing sectors being closed down, more and more assembly and manufacturing work is occurring in slums. With no safety nets the poor are forced to explore self-employment as hawkers and vendors, and those who are destitute to take up begging. Is the solution filling jails with people seeking to survive? How will we deal with the situation when another 25 percent of the world’s people come to cities in the next twenty years?

Crime and criminality occur across class and race, and for every petty criminal and thug on the street one could argue that the formal, respectable, upper-class elite steal much more per capita. So fears about how slums harbor thieves and criminals reflect the fact that we are looking only at the bottom of the food chain of illegality. The reality is that the city does not police informal settlements, and being out of bounds makes them safe heavens for bad elements.

Just like transport planning has to move beyond investing in roads only for the private cars that 10 to 15 percent of the city owns, cities too have to be planned for all of those who will eventually end up living in cities. Those of us who see cities gearing up to attract foreign direct investments and imitating European cities where populations are shrinking, or being seduced by Northern planners who produce almost 24th century visions of the city, are accelerating this tension and conflict instead of using planning to create cities that make space for all.

Sheela Patel is the Founder-Director of the Society for the Promotion of Area Resource Centres (SPARC), a Mumbai-based NGO that has been working on housing and infrastructure rights for the urban poor for the last two decades.

Art in the Service of Transformation. Transfo ...

Earlier this year SDI co-produced a film about life in Uganda's slums, called The Boda Boda...

A Commentary On A Recent Spate Of Evictions To Affect Federation Groups In West And...

**Cross-posted from The Age of Zinc** Age of Zinc is proud to present the twelfth installment in a new memoir from the slums of Kampala, Uganda. Check back every week to...