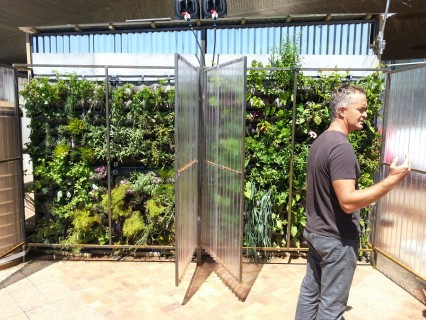 Reblocking is a community-led in-situ re-arrangement of shacks in accordance to a community design framework which opens up safer and more dignified public spaces (called “courtyards”). The community was in charge of implementing this project and more than 50 short term job opportunities were created through the Expanded Public Works Programme (EPWP) in partnership with the City of Cape Town.

Through the “re-blocking” and community mobilisation processes, topographical, institutional and social issues have been overcome. The “re-blocking” is a priority as it will allow better access to services. To further protect against fires, the community is hoping to use fire-resistant materials when re-building their houses. The city will partner to provide sewer and water lines, as well as electrical poles and electrical boxes for each family.

Re-blocking is more than just technical solutions to improving access to services. It is about a community process that starts with the empowerment of woman through savings schemes, the cohesion and unity of community working together on a broad-based project, and the formation of partnerships with government and other stakeholders in the long term development of the Settlement.

In November 2012, the Mshini Wam community was introduced by long-term development partners Worcester Polytechnic Institute (WPI) to Stephen Lamb and Andrew Lord of Touching the Earth Lightly (TEL). A pilot project was initiated around the building of a “green shack”, which incorporates low-tech, cost effective and sustainable design principles in the in-situ upgrading of informal settlements. By installing vertical gardens on shack walls and “liter of light” which amplifies natural light through a chemical-based dispenser installed in the roof of the shack. The pilot project drew a lot of media attention. The gardens were installed and subsequently the community started greening the courtyards created through reblocking by installing similar gardens. 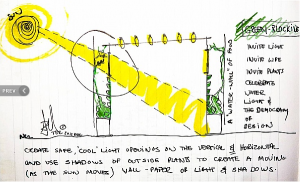 All sketches courtesy of TEL

The Green Shack looks at how simple, low-tech design can transform temporary spaces into “home” spaces. It is focused entirely on what we can achieve now… The next two sides of the cube represent the sun-facing walls of the shack. On these two sides The Green Shack suggests they be wrapped with a fire-proof boarding, covered by a vertical thriving organic vegetable garden. This wall garden creates food for the household. This wall is drip irrigated using a low tech, slow-release gravity fed system via a pipe made of re-cycled car tires. Rain water is also captured off the roof and stored on site. The slow-drip nature of the irrigation system ensures that the wall is constantly wet.

The term “blocking” refers to building or re-building shack according to a spatial development plan. The concept of the “Green Shack” is intended to “piggy-back” this infra-structure development and create what we call “Green Blocks”

With TEL’s low-tech, cost effective and sustainable design products, embedded in the social processes of ISN and the reblocking support from CORC, iKhayalami and ISN technical coordinators, the “green shack” and “green blocks” could inform a new way of looking at productive spaces in informal settlements. For this reason, the South African SDI Alliance partnered with TEL at this year’s Design Indaba at the Cape Town International Convention Centre. This is a opportunity for exhibiting community based planning meeting innovative design.

Be sure to visit the green shack from 1 – 3 March 2013 and have a first hand experience of “green shack” built on site. 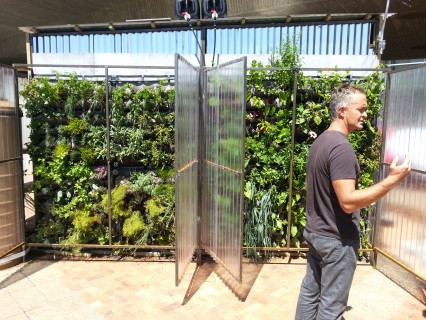 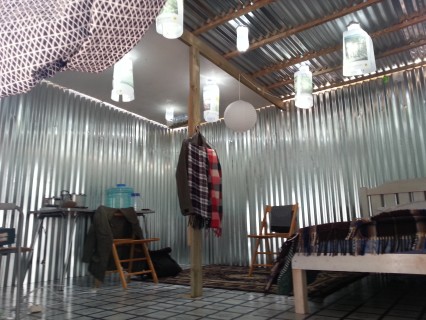 The “green shack” from the inside, a 20sqm floor space

Innovations in Solar Energy for Slums ...