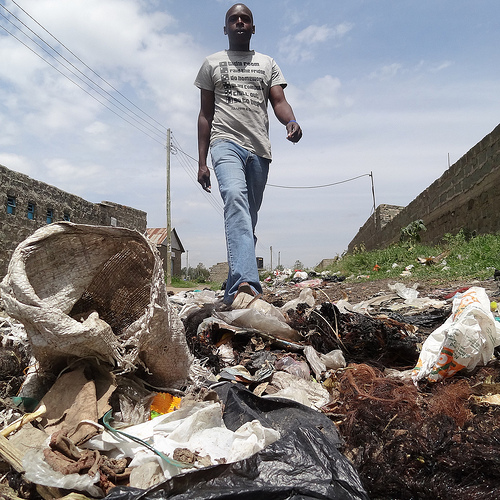 A young man walks past a pile of garbage in Viwandani ward, Naivasha.

By Augustine Karani with additional commentary from Dominic Mwangi, MuST Kenya

The delay in garbage collection was a major source of problem for the residents of Viwandani in Naivasha. When taking a walk in the Viwandani area, one was faced with more than two feet of water collected stagnantly in pot holes perfect breeding grounds for mosquitoes, uncollected garbage scattered haphazardly and foul stench filled the air.

The community faced harshest of challenges when it came to water and sanitation as there are no proper water drainage and sewerage systems. In addition, the supply of piped water was inconsistent and unreliable leaving the community to rely on water supplied by water vendors which was costly and inconveniencing.

About 40 plots had no sock pits, and the sewer systems had burst scattering the flow of sewage in the villages, exposing the residents to high risk of infections.

Poor environmental sanitation, lack of access to clean water and open drainage, are one of the major risk factors supporting the spread of diseases like Cholera.

It is out of these hardships that the residents of Viwandani ward came together to discuss the poor sanitation and lack of water. Through local lobbying and advocacy teams formed through Tushirikishe Jamii project, they engage in community forums, dialogue and active lobbying seeking solutions to the problems facing them.

For four months from January, the community engaged in to and fro shuffle activities seeking to address this problem. At one point the residents had to write a memo to all stakeholders complaining of unfulfilled promises and slow reaction to their grievances by the health office.

Their incessant efforts finally bore fruits as the Public Health Office promised to give a comprehensive report on the matter.

On June, the water and sewerage company invited the lobby and advocacy committee to their office and after further consultations, they promised to repair the entire burst sewer within 48 hrs and to always ensure that the sewer systems in good conditions. The company later unblocked all the sewage line within the 48 hours as they had promised.

The local landlords were also issued with a notice to construct sock pit for each plot and those whose premises are located next to sewer lines are to follow the necessary procedures to ensure an effective sewerage and draining system.

The municipal council on its part pledged to ensure quick collection of garbage in all the villages. Thanks to Tushirikishe Jamii project for adding new approaches to communities to the achievement of our needs.

Tushirikishe Jamii, a project of Forum Syd, implemented through Muungano wa Wanavijiji (Federation of Slum Dwellers) and Youth Alive Kenya, is funded by the European Union through the Ministry of Justice, National Cohesion and Constitutional Affairs NSA-net Program. The project seeks to enhance community participation in devolved funds and governance.