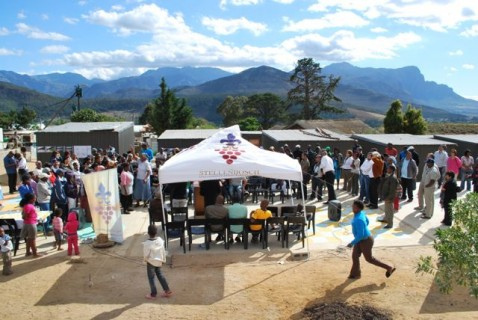 By Walter Fieuw (on behalf of CORC)

To the casual observer, a road is simply a tarmac to allow for different usages. Perhaps we can also define it as a line of communication, which is connected to a greater network through bridges, tunnels, support structures, junctions, crossings, interchanges, and so forth. Roads connect our neighborhoods and cities to one another, and give us right of passage. These road hierarchies are usually planned well, and neighborhoods and cities grow around these cadastral maps. 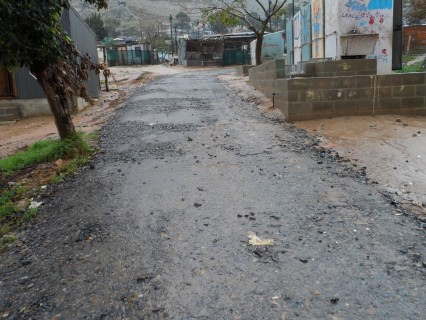 But in informal settlements, smaller pathways emerge as needed. In many ways, the informal city grows exactly in the opposite direction than the formal city. In the formal city, cadastral maps are carefully designed, but in the informal city, planning emerge through means of negotiating space in the process of place making. What then happens when formal regulations start to interact with informal ways of city-building?

In Langrug, an informal settlement located 3km outside the town of Franschhoek, an example has emerged where the informal processes of settlement has interacted with formal city-building planning processes. This article will not delve into the history of the settlement, which is available here. Important for contextual purposes, the community has been engaging the Stellenbosch Municipality since 2010 around the in-situ upgrading of the settlement, for which the community won the prestigious award from the South African Planning Institute in the “Community” category. The Stellenbosch Municipality applied for Upgrading of Informal Settlement Programme (UISP), or Part 3 of the National Housing Code, funding from the Western Cape Province. The UISP project has advanced to Phase 3, which includes full services.

Last week, the Municipality started paving secondary roads which has emerged organically through the years of settling on the land. The secondary roads have been well planned by the community, when they conducted an intense spatial mapping exercise in March 2011. The Alliance’s report on the spatial mapping in 2011 gives insight into the spatial knowledge the community has generated, which has made a significant contribution to the servicing of the settlement:

CORC supplied an aerial photograph of the terrain as well as some guidance on conducting spatial analysis, and in particular on what indicators to look for and how to identify an area’s constraints or opportunities for development. Then, photograph and markers in hand, the team went out into the February heat to locate all the infrastructure and facilities that they had agreed could benefit from improved maintenance or upgrading. The result was an interim map that detailed the position and conditions of all Langrug’s toilets, water taps, drains, drainage gullies, electricity boxes, street lights, and commercial activities, and thus threw light on some of the settlement’s most pressing issues.

In the coming month, the Stellenbosch Municipality’s appointed contractor will start the groundworks to implement a central access road. The community’s vision for an incremental upgrading approach to developing the neighbourhood has been a powerful guide in imagining what the community could look like. 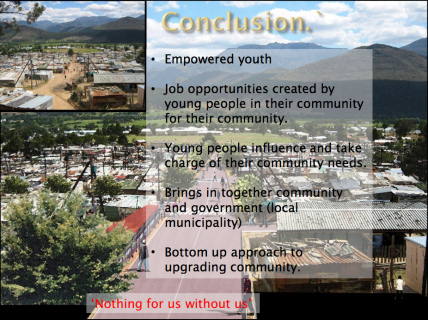 The 16 week Planning Studio with UCT’s School of Architecture Planning & Geomatics (SAPG), a department in the Engineering & the Built Environment (EBE) faculty, has generated many other proposals for a responsive spatial development framework which can guide the future upgrading of the settlement. The Alliance will continue to report on the development of Langrug informal settlement, and the partnership with the Stellenbosch Municipality.