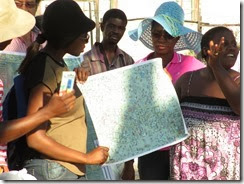 *Cross posted from the Shack Dwellers Federation of Namibia blog**

Students and community members share their experiences on the site analysis exercise in Freedom Square Informal Settlement in Gobabis.

The planning for the Freedom Square informal settlement came about as a result of an exchange that took place in March 2012 to Cape Town and Stellenbosch with Municipal councillors and officials from three local authorities (Gobabis, Grootfontein and Keetmanshoop) to learn about how communities and local authorities use enumeration and mapping information collected by the community to upgrade and plan their settlements. Following the exchange, the municipality proposed the re-blocking of the Freedom Square informal settlement in collaboration with the Shack Dwellers Federation of Namibia (SDFN) and Namibia Housing Action Group (NHAG). The exercise was sped up by the signing of the Memorandum of Understanding (MoU) with the municipality and SDFN-NHAG on 15 August 2013. With the assistance of SDI and the Association of African Planning Schools (AAPS), the re-blocking exercise involved the Land Management and Architecture Departments of the Polytechnic of Namibia (PoN) based on the MoU signed between PoN and the SDFN-NHAG in February 2012.
The exercise started off with feedback by residents on data collected and structures mapped through the Community Land Information Programme (CLIP) that was carried out between February and June 2012 in the settlement, with the support of NHAG and HabitAfrica, assisted by the Spanish Cooperation. 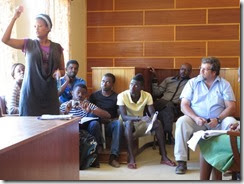 With assistance from the community and guidance from the lecturers and NHAG staff, the students carried out the site evaluation – community members teamed up with the students visiting each structure in the nine blocks, employing local knowledge to clarify the use of structures, accessing of services in and outside the settlement and explain the way of life of residents in the blocks. 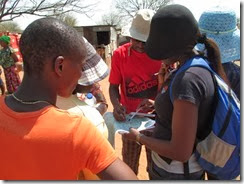 Feedback on the exercise was given to the community and the municipality. The importance of community participation in the whole exercise was echoed and appreciated by many of the students, who were able to get a better understanding of the cultural dimensions of site planning and settlement layout through an insider’s perception.

RESPONSES FROM THE PARTICIPANTS: 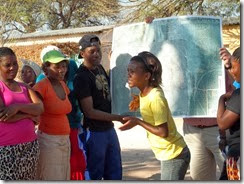 FROM THE COMMUNITY:
The students gave us their cooperation, we worked well together and through the whole exercise I improved on how to do mapping in the community. (Ludwina, CLIP team member from Block 4),
The site analysis brought light to how I see my surroundings. I learned how to use a GPS as we were doing the mapping. I also got to see which areas are suitable to build my house on and which aren’t, in order to avoid flooding, during the rainy season. (Loraine, Community member Block 5)
The students gave us cooperation during the mapping exercise, usually we just hear of GPS, but don’t know how to use one, through the exercise I learned how a GPS works. By using the GPS we learned that we can update our information of the people that moved. (Rufus from Block 2)
Maria gave feedback on the layout to the community and was very excited about the whole process “it was a wonderful weekend, we showed the students everything in our block, and I learned more about the water flow“. Diana added that in block three, working with the students they mapped out the unsafe areas, which gave more light on the dangers in the area. 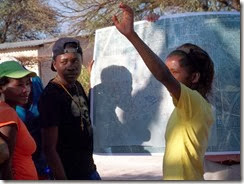 Nina from Block 6 had this to say, “Through the exercise I learned more about my community and their needs, members in my community who did not join the exercise were very grateful that I assisted the students. I learned about the different trees in the community , and that we should not cut the protected trees. It was a wonderful experience; I had the opportunity to see my house on the aerial photograph. The people in our block are very excited and ready to start saving, we have already selected a tree under which we will have our meeting on Saturday”.

STUDENTS COMMENTS
Eunice a student from PoN: ‘’Awesome!  During the exercise I learned that it is important to strengthen the community, this experience helped me have a different perspective on informal settlement residents, that they have a willingness to see change in their surroundings. 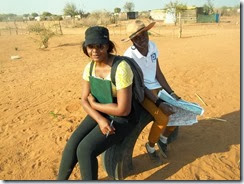 Hilaria: Previously believed that working with the community is difficult, the exercise showed me that it’s an easy process and a planner’s job should not be desk bound. I hope to work in more informal settlements.
Janine: It was fun, I loved the experience, the community was eager and willing to participate in the exercise. The elder people in the community were among the ones committed, I believe it was that they have hope for a better environment, as they have been living in the area for a long time. Through this exercise more community members I have observed are starting saving groups. As a future town planner, the experience showed me the importance of community participation in planning.
Adriano observed that using the local vernacular helps open participation and that the community do want to stay in a planned settlement. 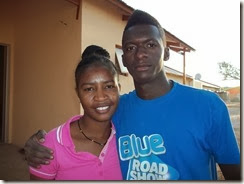 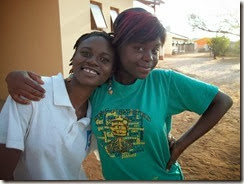 Laina: People here are in need of water, toilets and clear roads for vehicular access, this exercise gave me a clear picture on how to plan for informal settlements.
Martha: Advocacy planning, I believe, works better when consulting the community , bottom up planning is better than the conventional planning approach , as planners get to know the needs of the community and plan according to their priorities.
Sacky: The whole exercise confirmed my career choice as a future town planner; this showed me the benefits that may come out of a planning exercise, and it can change the lives of the community for the better.
Eva: There is always the belief that informal settlers are not willing to participate in their own development. This exercise showed me a different picture, as there were community members who actively participated, I call them the brave hearts, as we worked the whole day and they stayed with us until the end. Planning from the office is not as important as planning from within the community.
Gerson: Am very interested in seeing the final outcome of the exercise and hope to come back. 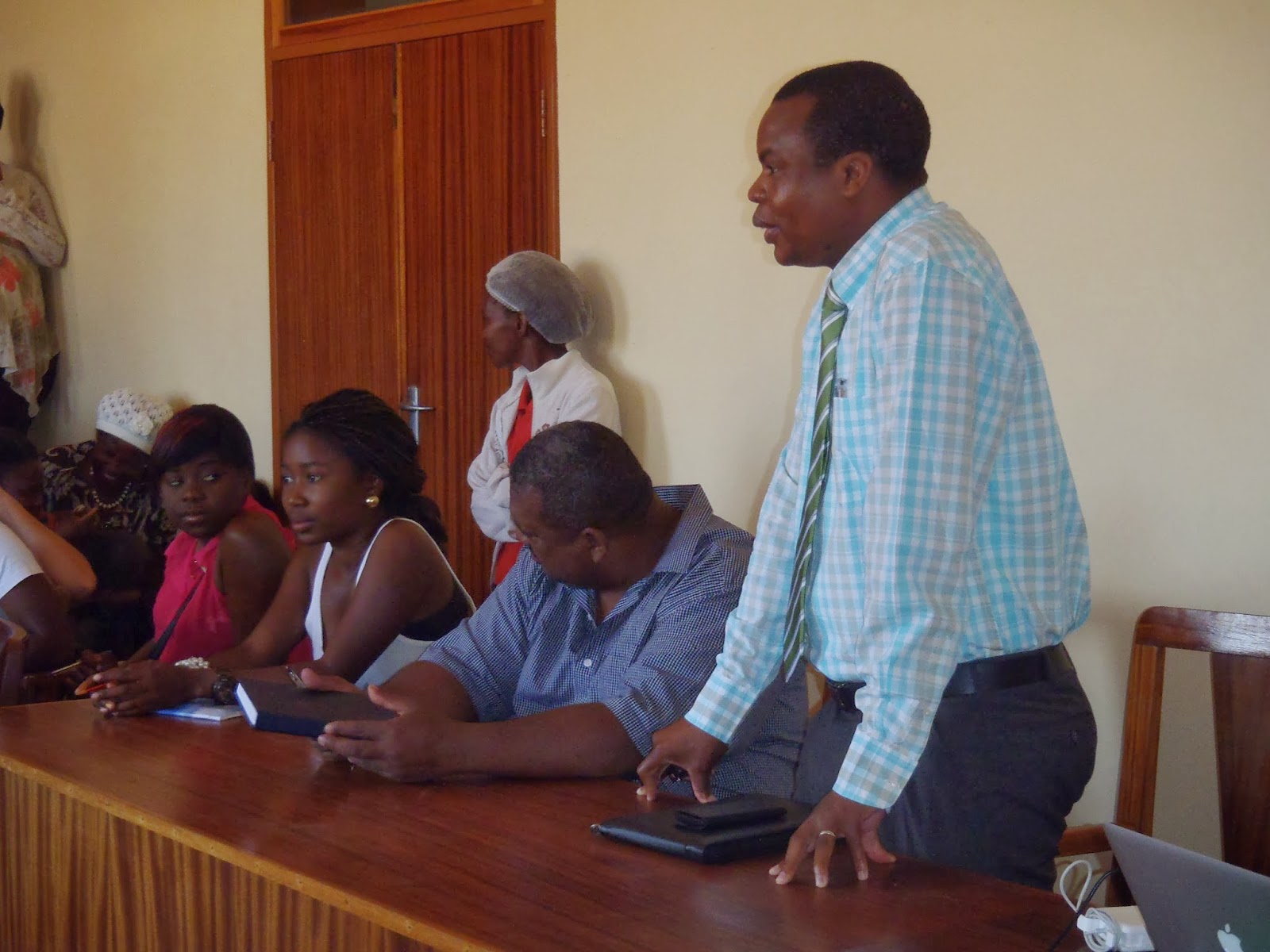 Municipal officials were present during the preparation meetings and the activities during the weekend.   Two dedicated meetings with the officials took place, one on Friday before the studio started and one following the activities in the community.  Mr Mbala, the new Strategic Executive for Local Economic Development, Urban Planning and Health indicated that the Council should not continuously resettle communities from one location to the other, but should aim for proper planning which can result in secure tenure for the residents.
The urgent issues identified by the community include waste in open spaces  and the need for more  water taps.  The officials are looking into addressing these issues with the community. The community, students and other stakeholders will participate in the layout planning and re-blocking studios during the first six months of next year.
Namibia