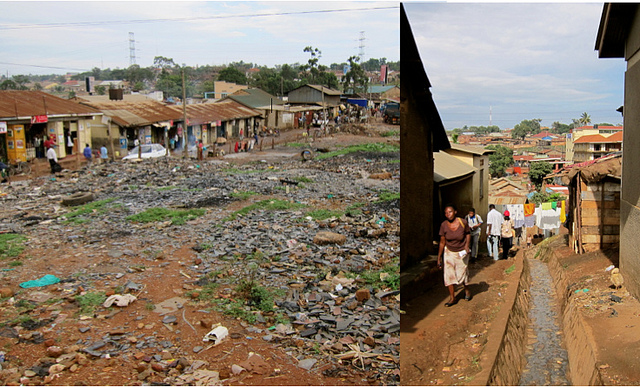 Photo: On the left, the site of an eviction in Kisenyi, Kampala, contrasted with congested living conditions in Kisenyi on the right.

Images of women and children desperately splashing water on their faces to alleviate the sting of teargas in Kasokoso slum (just outside of Kampala) have been splashed on the front pages of Uganda’s newspapers this month. News broadcasts have been dominated by footage of riot police loading young men into pickups, residents setting up roadblocks of fire, and a Mayor being beaten and eventually having his car set alight by infuriated slum residents. The cause of this chaos? Land disputes: disputes that evoke a passionate and intricate set of political and cultural sentiments in Uganda and have resulted in a seemingly intractable impasse – crippling planning and development initiatives.

In Kampala, Uganda’s capital, land tenure arrangements are among the most complex in the world: intensified by one of the highest rates of urbanization (approaching 6%). Attempts by the Ugandan government to administer land have typically relied upon formal cadastral systems, which have been powerless to disentangle the webs of layered and competing land tenure arrangements. Proposed developments all over the city have stalled, completely crippled by seemingly unresolvable land wrangles.

As Kampala city moves into a new era of administration – as a result of the establishment of the Kampala Capital City Authority (KCCA) in 2010 (which established the Authority to administer Kampala on behalf of the central government, replacing the former Kampala City Council), it remains to be seen how it will address the present impasse. Officials in the KCCA express unwavering commitment to developing the city in accordance with the recently formulated Kampala Master Plan, but – as is common with such city plans  – implementation strategies are about as clear as the vision of those doused in teargas.

There is an undeniable need to generate some order in Kampala, where planning dysfunction threatens the livelihoods of the rich and poor alike. And, while the author works for an organization supporting the rights of slum dwellers, this is not a paper that will simply argue the right of slum dwellers to stay and leave it at that. Such arguments cannot and should not be enough to satisfy either the government or the slum dwellers. Posturing on the part of rights groups, planners, and politicians is doing nothing to alleviate the fundamental challenges that perpetuate the acute poverty faced by the majority of Kampala’s residents. Instead, Kampala needs creative implementation strategies based on up-to-date data, authentic and informed citizen participation, and negotiation that accepts compromise will be needed from all sides.

The National Slum Dwellers Federation of Uganda (NSDFU) has been at the center of a collection of actors – including Shack/Slum Dwellers International (SDI), Cities Alliance, and UN-Habitat’s Global Land Tools Network (GTLN) – trying to forge such strategies in Uganda. The efforts are only just beginning, but perhaps hold promise for an approach to planning that has a greater grounding in reality and fosters a much higher likelihood of implementation. As a member of the SDI network, slum dwellers in the NSDFU utilize tools such as profiling, enumeration, and mapping to organize their communities and catalyze informed negotiation and partnership with government toward inclusive urban development. Here I focus on three potential components of the strategy being developed.

The first relates to the information required to plan. There has been no census in Uganda since 2002. The budget has not allowed it to take place for the past two years as scheduled. Thus, development plans are formulated on the basis of data that is over 11 years old. Any resident of Kampala can tell you that their city is not the same city it was a decade ago. The prevalence of multiple and overlapping land claims – particularly as it relates to Kibanda occupants (those who have rights to the land, in addition to those of the land owner) mean the majority of land tenure claims are not documented. As a result, many claims to tenure are not visible until threatened residents express these claims through protest – often violently.

The first component of the strategy, therefore, acknowledges that up-to-date data on the city and the tenure claims of its residents is required to understand actual on-the-ground realities. NSDFU has conducted citywide enumerations in 5 municipalities in partnership with the Ministry of Lands, Housing, and Urban Development (MoLHUD) with support from Cities Alliance’s Land, Sites, and Citizenship program. It has also piloted the Social Tenure Domain Model tool developed by the Global Land Tools Network (GTLN) and subsequently incorporated the tool into the profiling and enumeration work being rolled out in 14 municipalities. These experiences have informed the Kampala profiling process completed in November 2013, which gathered essential planning data on all 58-slum settlements in the capital.

Currently, the NSDFU and its support NGO, ACTogether, are preparing the preliminary findings from the citywide slum profiling of Kampala conducted by the NSDFU in November 2013. The profiling covered 58 slum settlements covering each of the five divisions of Kampala. Information is gathered through focus group meetings with local leaders and the community in each slum settlement. During these meetings a detailed questionnaire is administered by slum dwellers in the NSDFU. The initial findings are unprecedented, suggesting extreme levels of inequality and exclusion across Kampala. Nearly 70% of slum settlements in the city of Kampala have faced eviction threat, with 1.5 million slum residents currently facing high threat of eviction. More detail on these findings is presented below and includes statistics on land ownership and threat of eviction.

Once verified, this information will be critical to NSDFU as it seeks to expand implementation of the strategy outlined above in Kampala and for developing a concrete partnership with KCCA – specifically as it relates to the impending formulation of detailed development plans for the capital.

The second component recognizes that this information, this data, should not simply inform a consultant preparing a development plan or the physical planning department of the KCCA. In matters of land, communities need to trust and understand the data available if it is to guide planning. The urban poor have a deep distrust of the information cited by government, which they perceive to have historically been used to crush their rights and demands. Conversely, when communities drive the data gathering process, it sets in motion a discussion with authorities that is based on information the community owns. When they begin the negotiation process, they are able to do more than demand a right to stay: they begin a discussion on strategies for a way forward for upgrading based on concrete information. Politicization and manipulation of urban poor communities by politicians, developers, and even fellow community members has proven an equally significant impediment to urban land management. This component recognizes that equipping a wider base of citizens with actual information can help to counter the tendency for rumor and mistruths to drive the discussion.

The third component, then, relates to negotiation and partnership. It is clear technocrats cannot implement their development plans without community buy-in – unless they plan to use force to evict all those opposed to their plans. The community, likewise, will not benefit from continued haphazard, un-guided developments, which threaten the safety and viability of their settlements. Neither party benefit from the present state of affairs, which is characterized by both sides shouting and neither listening. The technocrats will only – perhaps justifiably – listen to the community if it can answer the question: What is your alternative? The community, meanwhile, will only listen to the technocrats if they agree to listen.

We are already finding that the present requirements for planning approvals will need to be adapted to fit the local land tenure realities if development plans are to have any chance of implementation on the land occupied by the majority of Kampala’s residents. We will keep you updated as the profiling information is analyzed, verified, and utilized by the NSDFU.

We, the Kenya SDI Alliance, appreciate the solidarity and support from everyone on the...

Stories from the ground: Know Your City settl ...

In July 2017 during the Asia Hub meeting, members made a renewed commitment to explore...