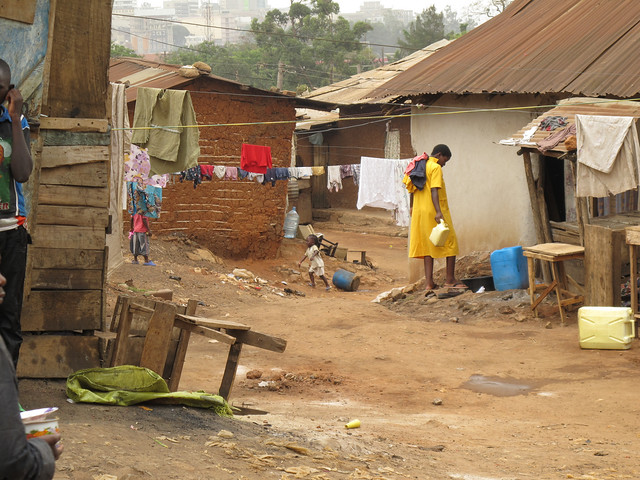 Age of Zinc is proud to present the third instalment in a new memoir from the slums of Kampala, Uganda. Check back every week to catch the next part of the story!

When I was 15 years old I decided to look for ways to survive with my mother. So I started to sell milk and bread to earn some money. I would go to the milk factory, buy some milk and bread and then sell them to get a little money for my school fees. This way I could at least help her out with the younger brothers. She was a single mother at that time looking after all of us – six of us – and taking care of us. I decided that I should also start to work. I just felt I had to work, so I was working while also going to school.

I decided to talk to some girls about this small business of selling milk and bread and they liked the idea. We all agreed and formed a group. There were five of us. So we started buying and selling milk and bread. It was a good business because we could  pay our school fees and also save a little money. We had to travel far distances and sometimes we would move at night and the places were not safe. We were selling at night, which was also dangerous, so you could not be alone; you needed someone who could move with you. We would leave very early at around five in the morning to go and buy bread from the bakery, which was in a different area, and then from the bakery go to the dairy corporation in Namuwongo in Kampala.

It was quite far between the two different areas, from Ntinda to Namuwongo, so we had to team up. One girl would wake all of us up in the morning and we would leave to go and buy the bread and then travel to buy the milk. Once we bought our commodities we would keep it while we went off to school. After school in the evening, we would come back and sell it. If we sold off everything we purchased in the morning we would go back to the factory around seven in the evening to get some more milk. We could sell up until ten in the evening. The balance we made we would hold onto and use for start up costs the next morning.

I had to do housework because I was the eldest but I also had to sell to make some money. I would go to sleep at around midnight and wake up at four in the morning. That was my resting time. I did my schoolwork at school. At school, I concentrated very hard in class and was a good student. I also did many school activities. When you’re active in school there was a way in which the school could give you some [monetary] assistance. So I was engaged in many things. I was a good long distance runner, I was a good music dancer and drummer, and I was a good actor. Whenever the headmaster would move around, I was there! Whenever we would win, I was a part of that team! Being active in school also helped me.

I also had no time to rest because I was trying to enjoy everything. I was not feeling a lot of stress because I was young and not thinking about so many things. It was not about the money, but to see how I could help my mother not to suffer. How I could work with her to see that we all survive.

Our neighbor was working in a bank and her children were all in boarding schools, good schools. I would always ask her to take me to the school but she could not afford to look after me as well. Then one day I happened to asked her: “let me fetch water for you and you could give me a little money that will help me pay my school fees.” She said it would not be enough, but I told her I would save and keep it because then at least I had something to start with. I was in form 1 in secondary school at the time. When she gave me money for fetching water, I used it to purchase one loaf of bread and two liters of milk. By the end of the day I had three loaves of bread and five liters of milk. That is how I started my business to earn money to pay for my school fees. Being able to earn money made me feel like I was in my own world, I was a free person.