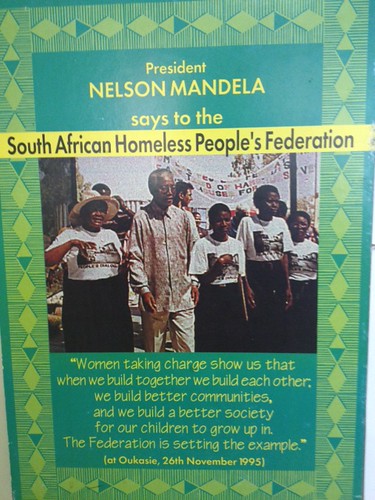 In 1995, shortly after being elected the first democratic president of South Africa, Nelson Mandela visited the Homeless People’s Federaiton of South Africa (now called Federation of the Urban Poor) in Oukasie, Gauteng. Oukasie is the home to one of South Africa’s oldest savings schemes, started by Rose Molokoane, one of the founding members of the South African Federation.

In his address to the Federation members of Oukasie, Mr. Mandela talks about the importance of government working together with the urban poor to meet South Africa’s housing challenge – a major challenge in 1995, and perhaps even a greater challenge today. He highlighted the important role of women in working to acquire safe, secure housing, stating the following notable point:

“You are showing that in building together we build each other, better communities and a better society for our children to grow up in.”

Today, the South African Federation of the Urban Poor has reached a critical mass consisting of some 1,500 autonomous savings and credit groups whose size range from a minimum of 15 to a maximum of 500 members. Since Mandela’s address in 1995, FEDUP has established itself as an international pioneer in the field of tenure security and people’s housing. Through its collective power, this network was able to lobby government for direct access to the housing subsidy programme (without the interference of developers or contractors), secure 10 million rand as a revolving loan facility, and heavily influence low-income housing policy under “the People’s Housing Process” (PHP). By securing these entitlements from the national government, the Federation was able to deliver 12,000 housing units (average size being 56sqm), incremental loans for a further 2,000 houses, infrastructure for 2,500 families, land tenure for 12,000 families, hundreds of small business loans, three parcels of commercial land, eleven community centres, and several crèches. This was all administered through its own housing finance facility, the uTshani Fund.

These days FEDUP and uTshani are still actively building houses and engaging government on the re-directing of housing subsidies to support people-centred, participatory and empowering development. Being strategically aligned to the Informal Settlement Network (ISN), FEDUP members are adding years of experience to the relatively new experience of informal settlement upgrading. The creative synergies at the intersections of a woman’s movements anchored in daily savings and livelihood strategies and a predominantly male-led and broad based social movement are redefining the social mobilisation “rituals”.

You can read Mandela’s full address below:

The rains of the past week have brought joy to many in our country, not least in this fertile farming area.

But the drenching downpours have also highlighted one of the great challenges facing our country – the challenge of putting decent roofs over people’s heads.

In approaching this task we have learned a great deal from the people – from those who are the biggest providers of housing in the country, the homeless themselves. We have learned the value of partnership between ourselves and the people in their communities.

We recognise the efforts but into housing by the people themselves. We are proud of the way our people use their initiative, mobilise their meagre resources, sharpen their skills, and put in their labour, in order to provide shelter for their families.

Government has committed itself to supporting the people’s housing process. We will provide mechanisms and funds to support it in such a way that the standard of housing can improve – particularly for the poorest of our people.

What I have seen here today confirms that this is the right course. The Homeless People’s Federation, with its 20 000 members across the country and its savings and training schemes, is setting an example of Masakhane in action.

What is particularly encouraging is to see the women taking their lives into their own hands, taking charge, determined to improve the lives of the communities and of our country.

You are showing that in building together we build each other, better communities and a better society for our children to grow up in. You are showing that with the interfere in the legal process, but it is not disinterested in the case whose outcome, we believe, will have wide impact.

Government is busy formulating a police on the ownership of mineral resources. Consultation will ensure that the resulting policy accommodates the aspirations of all stakeholders while ensuring that the mining industry retains its central position within the engine room of economic reconstruction.

Amongst our strategic objectives is the goal of ensuring that mining rights are made available to small entrepreneurs and that ownership of the industry is opened up to previously excluded communities. This also was the vision of Kgosi Lebone Molotlegi. It will be the duty of his successor, the Bafokeng people, and indeed all the people of South Africa, to continue the struggle for economic empowerment on all fronts.

During this delicate period of mourning and transition we urge the members of this community to close ranks and not to allow differences op opinion to drive them apart. You are one people. The practice of prohibiting non-Bafokeng persons from being buried in the same graveyard, regardless of their sojourn within this community, is a blight on the esteem and respect in which our nation holds this community and on the dignity of Kgosi Molotlegi in particular. Nevertheless, this issue should be left to the community to sort out on its own in accordance with the new culture of our rainbow nation.

Kgosi Lebone departed at a time when we had just concluded our first democratic community elections. The establishment of democratic local authorities in rural areas needs to be handled with great sensitivity. We are confident that this community will assist the new leader to play his constructive role in the process. In all villages under Kgosi Lebone’s jurisdiction, the elections went smoothly, and we look forward to an equally smooth establishment of local councils.

This is in everyone’s interest. We need one another and we all have a role to play now and in the future. The improvement of our lives and the future stability of our localities depend on these councils. An amicable relationship between the Kgosi and the newly-elected councillors will give local democracy in the rural areas a strong foundation.

As we bid our final farewell to our beloved Kgosi Lebone, let us look back at his heroic record and reflect on the love he had for this community. Let us, for a moment, focus on his vision of a prosperous future and pledge that we shall never rest until that ideal is realised.

Issued by: Office of the President