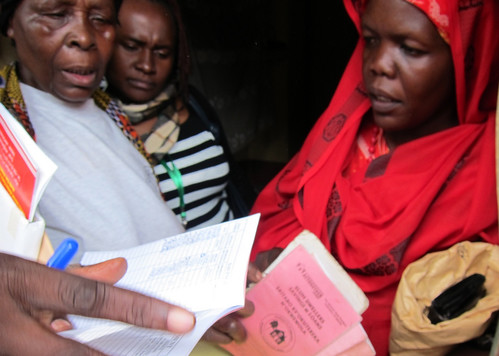 Age of Zinc is proud to present the seventh instalment in a new memoir from the slums of Kampala, Uganda. Check back every week to catch the next part of the story!

When our community began forming local village committees, the women in the settlement said I could become their secretary at the settlement level. I was recording their minutes and when visitors came to explain to the community what they were planning to do I would always invite them and we would sit and discuss.

After some time, Uganda Association of Women Lawyers (FIDA) came and was looking for someone who can be trained to help the children in this settlement. The committee gave them my name and I went for the training. I started to work with them, not as an employee, but someone working for the community – volunteering. Our role was to talk to parents about not violating children’s rights and understand how report those that have violated the rights of the women and children? This position was perfect for me!

Another program organized by FIDA was concerning the Land Act of 1995. There were a lot of evictions at the time. I was trained and moved settlement-to-settlement sensitising the communities on how to handle evictions, land ownership, and land negotiations. This helped me to learn how to work with communities and big congregations, especially with women who were suffering after evictions. The men would sell off the land/house without the women’s consent.

The community would tell me what they want and what they want to do, such as adult literacy, women’s rights, youth employment, and skill development. So my job was to inform those organizations what the community wanted most. I would then move door-to-door mobilizing people. I would explain to the community the purpose of the visitors and request them to attend meetings in person. I had to write down all the different teams and by that time I had become the secretary of the area. The women’s team said we need a secretary for the whole zone and that I should take it on. I had recorded all the people in this area and I knew them face to face, by their name, and what each person could do. If we needed someone I would know who to bring for the team and who could assist me to look for those people.

In the women’s group we were just learning to share the challenges and experiences we were facing. In the women’s group the older women were advising the younger women and teaching them how to knit mats, baskets, and table clothes to sell for income. It was in this meeting that the women noted a challenge of poor sanitation and reported it to Concern Worldwide. Concern responded by providing the community with 10 public toilets.

The FIDA training was about law. But law is not only about children’s rights. We learned about the broader picture. We talked about land, about women, and about children’s rights – so I had a big package. This was a chance to implement what I learned, because I had a lot of connections. If a woman was violated, I knew how to assist and how to report it.

You know, I was dreaming about becoming a lawyer, or an accountant, or a nurse. I wanted those three things, but I did not get any of them. At least now just when talking I do a little of each of those things. The way I’m doing this, it’s natural, it’s just natural, it’s a part of me. No one is paying me, but I feel that I just have to do it. By the end when I see the fruits of what I’ve done I at least feel encouraged and think I need to do more.